Some say FIFA is getting involved in the political game after it refused to take action on six Israeli soccer clubs playing in settlements of the occupied West Bank. 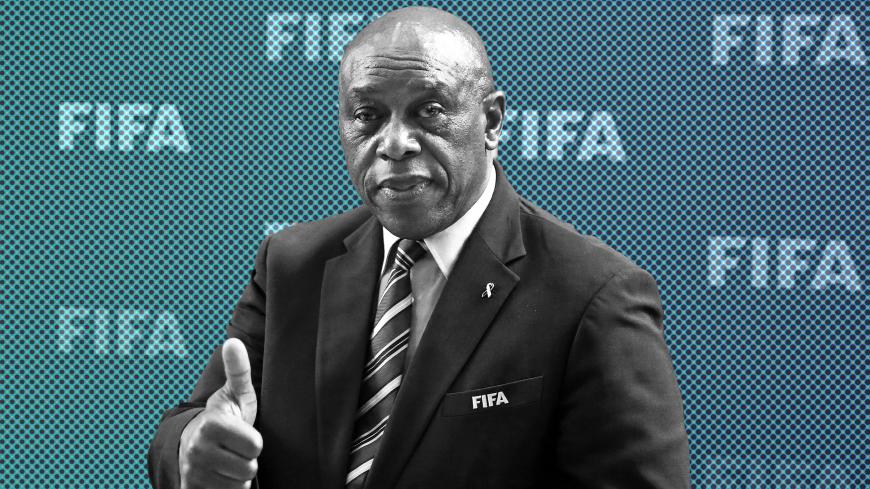 Chairman of the FIFA Monitoring Committee Israel-Palestine Tokyo Sexwale poses for photographers after a meeting of the FIFA Council at the FIFA headquarters in Zurich, Switzerland, Oct. 14, 2016. - REUTERS/Arnd Wiegmann

The international soccer governing body FIFA announced Oct. 27 that it would allow six Israeli settlement soccer clubs located in the occupied Palestinian territories to continue playing in the Israeli leagues. The FIFA Council meeting in Kolkata, India, chose to preserve the status quo from among three options recommended by its own monitoring committee.

Tokyo Sexwale — the chairman of the FIFA Monitoring Committee Israel-Palestine, which was established based on the decision by the 65th FIFA Congress in 2015 to avert a vote on suspending Israel from world soccer — submitted a report to the FIFA Council that included three options:

FIFA’s governing council chose the option to “maintain the status quo.” In a statement issued Oct. 27 in Kolkata, FIFA said that resolving the Palestinian-Israeli conflict is beyond its ability and claimed that “any interference by FIFA in the status quo of football in the relevant territories without the consent of the parties concerned might aggravate the situation of football not only in the territories in question, but also in the greater region affected — which would not be in the best interests of the game.” The FIFA Council added, “The matter is declared closed and will not be the subject of any further discussion until the legal and/or de facto framework has changed.”

FIFA bylaws stipulate that members cannot play on the grounds of another member without their permission. The issue was referred to the United Nations to determine whether Israel had any rights in the West Bank. The UN said in October 2016 that the West Bank is occupied Palestinian land and that the settlements located there are illegal. This was reiterated on Dec. 23, 2016, in UN Security Council Resolution 2334, which FIFA recognized. The European Football Association decided in 2014 to bar the Crimean Peninsula from playing "under the auspices of the Russian Football Union," based on the same FIFA bylaws.

An angry Jibril Rajoub, the president of the PFA, held a press conference in Ramallah Oct. 29, protesting the FIFA Council decision. He said FIFA has “betrayed its own principles, insulted Palestinian soccer and granted impunity to blatant violations of the FIFA statutes.”

Speaking to Al-Monitor on his way to Prague Oct. 31, Rajoub vowed to challenge the decision. “We will go to the Court of Arbitration for Sport and demand that FIFA honors its own bylaws, which ban teams playing in a fellow member’s land without their permission.”

Omar Shakir, Israel and Palestine director at Human Rights Watch, told the Saudi-based Arab News that there is nothing political about following one’s own rules, saying, “FIFA is rubber-stamping games played on stolen land and this decision even violates FIFA's latest human rights commitment."

Susan Shalabi, PFA vice president, told Al-Monitor that she and PFA officials were shocked with the decision by the FIFA Council. “We are still shocked and angry at the unreasonable and inconsistent FIFA decision,” she said.

Shalabi lashed out at the legitimization that the FIFA decision has given to the illegal Jewish settlement enterprise in the occupied territories. “The decision in Kolkata was a dark day for FIFA. Before Friday [Oct. 27], only the right-wing government in Israel considered the occupied Palestinian territories as Israel proper. Now it is FIFA and the right wing who make this consideration.”

Rajoub made a similar statement. He said at a press conference Oct. 29, “Even the Israeli league does not dare say this is their land.”

Pro-Palestinian activists were also unhappy. Over 155,000 people have signed a petition on Avaaz calling on FIFA to give Israel the “red card.”

“FIFA's failure to act means thousands of Palestinian children are being robbed of the chance to play the game they love on the land that’s theirs,” Fadi Quran, the senior campaigner for Avaaz in Palestine, said Oct. 27 on the online platform Inside the Games. He concluded, “If FIFA won’t do its job and won't respect its own statutes and international law, then the courts will force it to do so.”

James M. Dorsey, a senior fellow at S. Rajaratnam School of International Studies in Singapore, told Al-Monitor that FIFA’s assertion that it is not going to take a political stand was pure fantasy. “FIFA’s handling of the Palestinian issue touches on a fundamental problem of international sports governance: the refusal to acknowledge the symbiotic relationship between sports and politics and devise ways of governing that relationship. International sports associations are able to take arbitrary political decisions by maintaining the fiction that sports and politics are separate. FIFA’s refusal to rule on Israeli leagues, admitting clubs from Israeli settlements in the occupied West Bank, is but the latest example.”

Issam Khalidi, co-author of the book “Soccer in the Middle East,” told Al-Monitor that to be neutral on the issue of settlement clubs, FIFA has chosen the side of the occupation. “It's obvious that FIFA and its president are under the influence and threat of the Israeli lobby. It had to take such a decision in order to evade exposing its corruption. FIFA is violating its own laws that stipulate clubs are not allowed to play in another country’s territory without the latter’s permission. It refused to listen to the UN that these settlements are illegal according to UN resolutions.”