The dispute within FIFA over the status of the West Bank received a major breakthrough with UN Security Council Resolution 2334. But will Israel heed the decision? 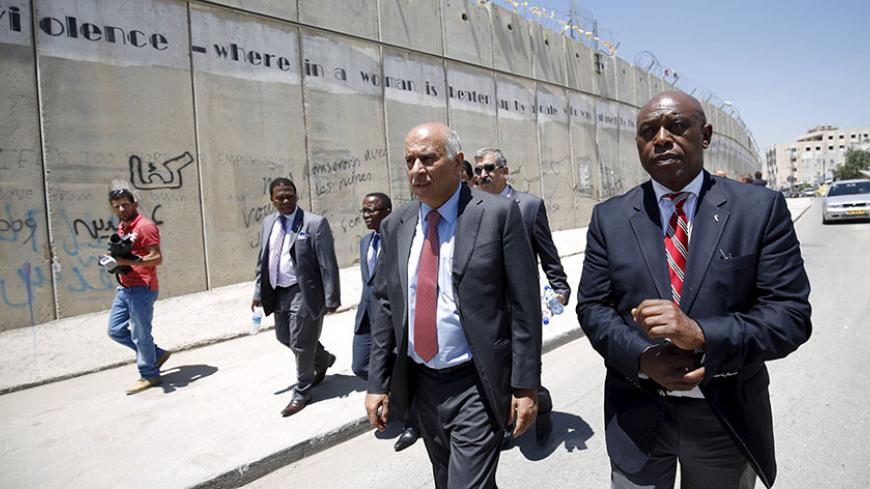 Jibril Rajoub (2nd R), head of the Palestinian Football Association, walks with Tokyo Sexwale (R), an activist and head of FIFA's Monitoring Committee Israel-Palestine, past Israel's controversial barrier as they arrive for a news conference in the West Bank town of al-Ram, near Jerusalem, May 7, 2015. - REUTERS/Mohamad Torokman

When the global community was discussing an anti-settlement resolution in New York, officials at the FIFA headquarters in Zurich were watching the deliberation closely. When United Nations Security Council Resolution 2334 was approved without a single opposition in the 15-member Security Council Dec. 23, the international governing body of soccer was provided a strong document to resolve the status of the areas in which six Israeli soccer clubs are playing. The clubs are located in West Bank settlements and FIFA bylaws clearly state that soccer associations need permission to play in the territories of another soccer association.

Since June 2015, when FIFA’s general assembly appointed a monitoring committee headed by South African Tokyo Sexwale, the issue of the status of the territories has been the center of discussion. Israelis claim that the West Bank is “disputed territory” and paid little attention to a letter from the UN clearly setting the record straight as to the territories' status. Wilfried Lemke, the special adviser to the UN secretary-general on sport for development and peace, wrote a letter to Sexwale in October saying the Security Council had determined that Israeli settlements in the territories lack legal validity.

Susan Shalabi, one of two vice presidents of the Palestinian Football Association and a member of FIFA’s monitoring committee, told Al-Monitor that the Israelis belittled the letter from Lemke. “They tried to argue that it was not coming from a high enough authority within the UN,” she said.

If the letter from a special adviser was not satisfactory, the Dec. 23 Security Council resolution made the issue of the status of Palestinian lands crystal clear.

Human Rights Watch (HRW), along with other organizations, made a strong public argument on the issue. In a letter addressed to FIFA President Gianni Infantino on Jan. 5, HRW Israel/Palestine Advocacy Director Sari Bashi said that the resolution left no doubt as to the status of the location of the soccer clubs.

“UNSCR 2334 provides a renewed, unequivocal basis for FIFA to address the question of football clubs, leaving no doubt that football clubs in settlements are located on the Palestinian side of the internationally recognized border and that the settlements in the occupied territory are unlawful,” the letter signed by Bashi stated.

The online polling site Avaaz, which has garnered more than 150,000 signatures against the Israeli settlement clubs and the European Middle East Project, also signed the letter to FIFA.

The FIFA monitoring committee has repeatedly postponed a decision regarding the Israeli settlement soccer clubs. Shalabi, who just returned from attending the Jan. 9 FIFA ceremonies naming the world’s best soccer players, told Al-Monitor that the committee delayed reaching a decision until Feb. 10. “The continued delays, mostly on the request of the Israelis, are not helping. Everyone knows what the decision must be. The same issue happened when Russia annexed the Crimean peninsula in 2014 and FIFA forced Russian teams not to play in Crimea.”

HRW, which had produced in September 2016 a well-researched document about Israeli soccer clubs playing on what it called “stolen Palestinian land,” also echoed the call for the need to make a decision. “Further delay in requiring the Israeli Football Association (IFA) to stop sponsoring games in settlements would place FIFA far outside international consensus and place it in contravention of its responsibilities under the UN Guiding Principles on Business and Human Rights,” HRW said in the Jan. 5 letter.

Palestinian member of the Israeli Knesset Issawi Frej told Al-Monitor that it is “unacceptable” to continue delaying the issue. “I have said in the Knesset that Israeli teams playing at the settlement clubs as part of the Israeli league is a violation of international law.”

Frej — whose Kafr Qasim town (in central Israel) soccer team, which he used to own, is in the third Israeli soccer division — has to play at the settlement clubs that are in the same Israeli soccer division. He said that the issue of playing in settlements is a big problem for the Arab players. “We are clear that the pitches are in the occupied territories and that we should play on Israeli fields, but we are put in an unenviable position. If we choose not to play in the settlements, we will be severely punished by the IFA.”

Frej, from the left-wing Meretz Party, said a decision by FIFA to bar the Israeli league from playing in settlements will cause a political earthquake. “The Israeli government will lose big time if FIFA makes a decision against settlement clubs. Netanyahu’s right-wing government will suffer a lot and might be out of power as a result of such a FIFA decision.” He said that Netanyahu’s coalition is dependent on partners who are strong supporters of Jewish settlements.

UN decisions have consequences and especially if the decision comes in the form of an unopposed Security Council resolution. Israeli settlement clubs playing illegally in occupied Palestinian territories might be the first direct losers if FIFA simply implements its own policies. Continued delays will not make the problem go away and the monitoring committee needs to have the moral courage to abide by FIFA’s own bylaws.