Is Deal on Palestinian Prisoners Key to Peace Talks?

Negotiations over pre-1993 Palestinian prisoners might break the deadlock between Israel and the Palestinian Authority. 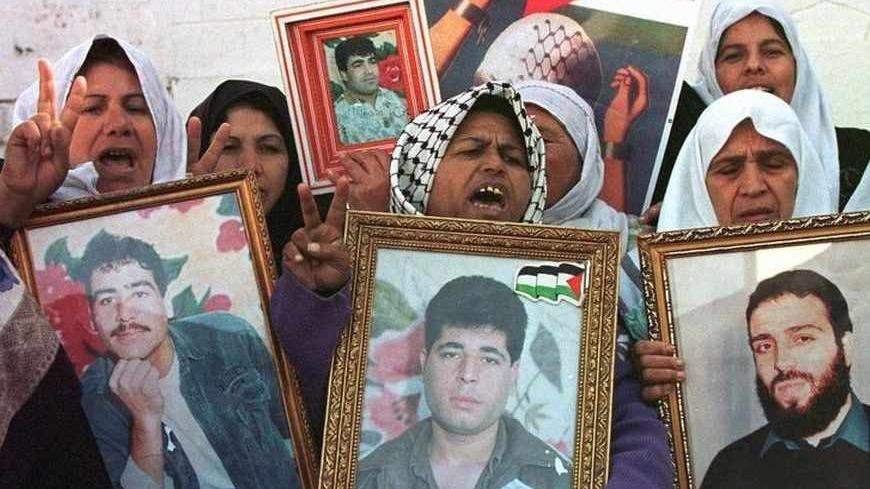 Palestinian women hold photographs of their sons during a protest in front of the headquarters of the International Red Cross Committee in the Gaza Strip, Jan. 12, 1998. - REUTERS

The shuttle diplomacy meetings held by US Secretary of State John Kerry at the end of June in Jerusalem, Amman, Ramallah and then back to Jerusalem, may not have produced any visible successes or achievements pertaining to the issues stalling the resumption of negotiations between the Palestinian and Israeli sides.

Palestinian President Mahmoud Abbas merely described them as “useful”; behind the scenes, politicians and pundits with knowledge about the meetings thought that a return to negotiations would predominantly come through a release-of-prisoners deal and the bolstering of economic activity between the two sides in Area C of the West Bank, instead of through a freeze in the building of settlements.

A senior Palestinian official who did not want to be identified told Al-Monitor: “We feel that there is a measure of flexibility concerning the release of prisoners held prior to the 1993 Oslo Accord, whereby Kerry devoted more time to discuss this issue.” The source continued: “Kerry’s talk about how releasing the pre-1993 prisoners would constitute a way into resuming negotiations between the two sides, reveals the level of effort that the man has been putting to convince the Israelis about the need to release those prisoners. There are clearly signs of Israeli flexibility in this regard.”

The same source opined: “Releasing all or some of the pre-1993 prisoners will be a good opportunity for Israel to prove its good intentions to Kerry, in light of the adamant Israeli rejection of any talk about a settlement freeze and the establishment of a Palestinian state within the territories occupied in 1967. These are the Palestinian side’s preconditions for the resumption of negotiations.” Furthermore, these prisoners’ release would give Abbas the Palestinian green light for the resumption of negotiations, due to the high level of public sympathy toward the prisoners’ cause.

The undersecretary of the Palestinian Ministry of Prisoners' Affairs, Ziad Abu Ein, confirmed that “there is a set of offers being made here and there, but, as of yet, no palpable reliable results have been reached in this regard.”

Although Palestinian politicians initially refused to openly comment about this issue, an upswing of activity did take place during the last two weeks at the Palestinian presidency’s headquarters, which asked the Nablus-based Ahrar Center for Prisoners Studies and Human Rights to conduct an in-depth analysis of the current state of affairs of the pre-1993 prisoners, especially the ill and elderly among them.

The director of the Ahrar Center, Fouad Khuffash, told Al-Monitor: “All indications on the ground indicate Israel will release Palestinian prisoners. It is certain, however, that this release will not include all of the pre-1993 prisoners.”

Khuffash believes that “the release will not include prisoners taken in Jerusalem and the interior — meaning Palestinians who live in Israel proper and hold the Israeli nationality — and there will be Israeli intransigence regarding Hamas and leftist prisoners."

According to Ahrar, there are 24 Palestinian prisoners who have spent more than 25 years inside Israeli jails, and 25 of the 104 total prisoners are serving sentences ranging between 20 and 40 years.

In the same context, the US Consulate General in Jerusalem asked the Palestinian Prisoners Club two weeks ago to submit a detailed report about the names and condition of pre-1993 prisoners, as confirmed to Al-Monitor by the club.

This prisoner-related activity also spread to inside Israeli jails, where Khuffash confirmed that “prisoners belonging to the Fatah movement affirmed, through letters and their lawyers a few days ago, their rejection of any partial release of pre-1993 prisoners. They demanded that the release include all of them, so that their cause not be fragmented, which would allow Israel to exploit those remaining in captivity and put pressure on the Palestinian leadership in the future.”

In turn, Abu Ein said: “The resolution of this affair cannot occur in stages. This is a red line for the Palestinian leadership, which will not allow any pre-Oslo prisoners to remain in Israeli custody if it is to agree to a resumption of negotiations with the Israeli side.”

He continued: “We object to dividing this issue based on geographical locations, especially when it comes to cousins Karim and Maher Younes, who hold Israeli nationality and have been in custody for 30 years.”

The Younes' are the longest-serving Palestinian prisoners. They were arrested in 1983 and are Israeli citizens.

Khuffash commented: “If Israel acquiesces to releasing them, and that is a very remote possibility, then we expect that their release will be conditional on them being stripped of their Israeli nationality and barred from entering Israel.”

But Khuffash doubts that Israel would release the pre-1993 prisoners all at once. This point of view is consistent with previous statements given by author and political analyst Hani al-Masri to Al-Monitor, when he said: “Israel has, in secret negotiations with the Palestinians, agreed, a while ago now, to release 50 prisoners, in three batches.”

Khuffash said, “This scenario is the one that is more in tune with the Israeli mentality, where it would release 25 prisoners not serving life sentences and whose prison terms are about to end, in addition to an additional 25 sick and elderly prisoners, whom Israeli intelligence considers to pose less of a threat.

It should be mentioned that the total number of prisoners released by Israel in the last 20 years was 8,425, most of whom were nearing the end of their prison terms, as part of goodwill gestures toward Abbas, or deals with Hezbollah and Hamas.

Below are some facts about Palestinian prisoners taken prior to the signing of the Oslo Accords in 1993: