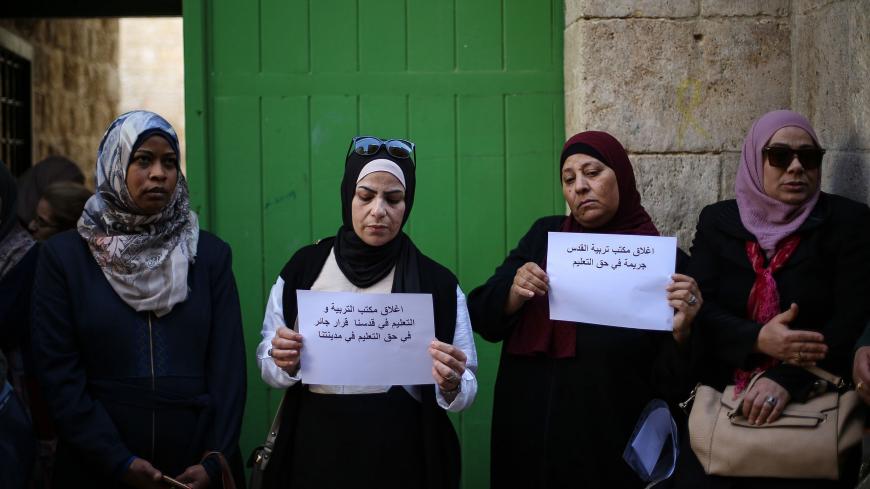 Palestinians gather in front of the Palestinian Directorate of Education during a demonstration to protest Israeli raids and closures of Palestinian institutions in East Jerusalem, Nov. 26, 2019. - Mostafa Alkharouf/Anadolu Agency via Getty Images

GAZA CITY, Gaza Strip — A state of anger and resentment prevailed over Palestinian streets that witnessed sit-ins and protests, stirred by the closure on Nov. 20 for six months of Palestinian institutions in Jerusalem. Israeli Minister of Internal Security Gilad Ardan signed the order.

On Nov. 25, the Ministry of Education and Higher Education organized a sit-in at the ministry's headquarters in the West Bank city of Ramallah. The participants rejected and denounced the Israeli authorities' six-month closure of its Jerusalem Education Directorate, which serves about 100,000 Jerusalem students.

Israeli authorities also arrested the head of the directorate, Samir Jebril. Participants stressed that the Israeli decision comes as part of a systematic campaign to control the education system in the city. They called on human rights, humanitarian and media organizations to shoulder their responsibilities to curb Israeli plans aimed at obliterating the Palestinian identity in Jerusalem.

The Amman-based Assembly of Jerusalemite Institutions issued a statement Nov. 25 affirming that the Israeli army had stepped up its Judaization measures in Jerusalem, with the aim of striking at the Palestinian Arab identity and imposing Jewish cultural and security control over the city.

The statement clarified that this campaign came only two days after US Secretary of State Mike Pompeo's statements on the legality of Israel’s settlements. This, critics say, gave greater support and cover to Israel to continue its Judaization projects.

The Mada Center for Development and Media Freedoms affirmed in a statement Nov. 20 that the closure of the Palestine TV office in Jerusalem by the Israeli authorities is an escalation of attacks against media freedoms. The statement condemned the closure as “part of Israel's efforts to silence the media and prevent the Palestinian story from spreading, through a series of repression against the media and journalists.”

The statement added, “Mada Center calls upon the various human rights institutions and the international community to pressure the Israeli occupation authorities to reopen the office of Palestine TV, to enable the Palestinian media outlets and journalists to work freely, to stop the Israeli attacks that are escalating, and finally to hold the perpetrators accountable.”

Palestinian government spokesman Ibrahim Melhem lashed out at the Israeli authorities for shutting down official Palestinian institutions in Jerusalem, arguing that Israel is seeking to Judaize the city. “Closing [the] Palestine TV office is another violation by Israel against Palestinians,” he told Al-Monitor, adding, “Israel is trying to do this away from the media spotlight.”

Of note, these Israeli measures were implemented just two days after Pompeo said Nov. 18 that the United States no longer sees Israeli settlements in the West Bank as contrary to international law. “The Palestinian government will take steps to counter the US decision to legalize settlements,” Melhem asserted. “The first measure is offering citizens all the requirements for resilience and steadfastness to preserve their land and launch agricultural, industrial and investment projects in these lands. The second is addressing international courts including the International Criminal Court and the European Court of Justice.”

For his part, Khaled Sukkar, director-general of Palestine TV, denied to Al-Monitor Israel’s allegation that Palestine TV's office was closed for security reasons. He asserted that the decision is purely political. “The Israeli army forces have always pursued the TV staff across the West Bank and in the city of Jerusalem in particular. We have a patriotic mission to expose Israel's policies of occupation and document its violations against the Palestinian people. This, of course, does not appeal to the Israeli authorities,” Sukkar said.

He noted that on the day of the closure, Palestine TV staff had not received the closure order and continued their fieldwork as usual. “Our equipment and cameras are in the field and deployed everywhere in Jerusalem. We do not need offices.”

Sukkar explained this is not the first time the Israeli army has gone after the TV staff. “There are hundreds of Arab, foreign and international press offices in the city of Jerusalem, but Israel only attacks Palestine TV staff. We will continue to be biased for Jerusalem and expose Israeli behavior against the Palestinians. Israel does not want any Palestinian sovereign appearances in Jerusalem; this is why it is closing Palestinian national institutions.”

Al-Monitor spoke to Rafat al-Qudra, director-general of the General Authority for Radio and Television in the Gaza Strip. He said, “The closure of the Palestine TV office in Jerusalem is an explicit violation of the freedom of Palestinian journalistic work. This measure will not discourage the TV crews from exposing Israeli violations against Palestinian people.”

He urged international institutions and the international community to assume responsibility for the Israeli attacks on Palestinian journalists.

He refused to link the increasing Israeli attacks on Jerusalem to the US green light in support of Israeli policy, saying, “This connection is unlikely. Since the second intifada in 2000, Israel has been seeking to change the city’s identity as Israeli rather than Palestinian. This is being met with Palestinian resistance. But stopping it [requires] a miracle.”

The Israeli attacks are not limited to Jerusalem but extend to the West Bank and Gaza Strip. “Israeli violations affect all economic, environmental, educational and religious fields,” Hindi said.

Regarding the feasibility of the rallies and sit-ins called for by the Palestinian government, Hindi said the PA does not have many pressure tools and means, as Israel imposes several obstacles on Palestinians. “This is in addition to the Palestinian internal divide that undermines Palestinian efforts, whether locally, regionally or internationally. Palestinians need unity and cohesion in order to be stronger and better face the Israeli plans,” he said.