As Interpol's newest member, some rivals of President Mahmoud Abbas fear the Palestinian Authority may be tempted to misuse its new connections to pursue them. 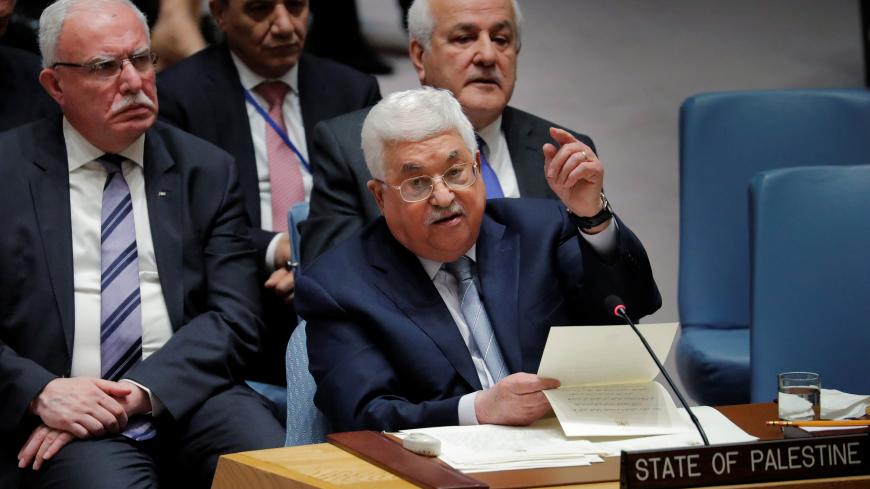 GAZA CITY, Gaza Strip — The Palestinian Authority (PA) was voted in as a full member of Interpol in September, and the Palestinian membership was approved in Beijing by 75 to 24, with 34 abstentions.

The PA recently completed the technical procedures to connect the Palestinian police force to the organization’s databases in the Lyon headquarters on Feb. 21.

With this new status, the Palestinian police have access to information on criminal activities from police agencies around the world and will be able to issue red notices, international requests for the detention of wanted individuals for extradition.

The step has raised concerns among the PA’s exiled political rivals. Dismissed Fatah leader Mohammed Dahlan and others such as Mohamed Rachid and Walid Najb fear that the PA might use Interpol to track them down and extradite them.

Fatah leader Rabah Muhanna told Al-Watan Voice Jan. 17 that the PA has been following the necessary procedures to request the arrest of Palestinian fugitives charged with corruption. Muhanna said that Dahlan is likely to top the list of names.

Majed Abu Shamala, a leader in Fatah’s reformist movement close to Dahlan, told Al-Monitor that any move by President Mahmoud Abbas against Dahlan will be invalid, as the Palestinian Legislative Council is the only body authorized to revoke his diplomatic immunity. He pointed out, “Should the PA succeed in issuing red notices for fugitives, how will it manage to bring them to the West Bank, where all border crossings are controlled by the Israeli authorities?”

Palestine’s membership in Interpol is also unnerving Israel, which strongly lobbied against the admission to protect Israeli military and political leaders in European countries.

Shamala said that the judicial system in the Palestinian territories needs drastic restructuring after 11 years of division into two judicial bodies: one based in the West Bank controlled by Abbas and the second in the Gaza Strip established and controlled by Hamas. He stressed that Interpol should not take sides, as doing so would mean the other had been in violation of the law during the years of division.

Mahmoud Salahudin, the director of Interpol in the Palestinian territories, told Al-Monitor that currently the bureau is working on the cases of several Palestinian fugitives, whose names and numbers he declined to share.

“We are a law enforcement liaison between the Palestinian judiciary and the Interpol General Secretariat. We carry out orders coming from the pertinent Palestinian jurisdictions," he said.

Salahudin stressed that the bureau's work is limited to criminal and terrorism-related issues as part of the international organization. He said that the Palestinian Interpol staff have extensive experience in their field of work and received training from European police forces in 2016 and 2017.

Salahudin also said that with the new electronic data exchange system, the Palestinian branch will be able to communicate with the other 191 Interpol members, including Israel, which he hopes will cooperate in the extradition of Palestinian fugitives in Israeli territories.

Shaawan Jabareen, director of Al-Haq human rights organization in the West Bank, told Al-Monitor that several human rights organizations have documented torture in PA prisons. He said, “A series of judicial procedures must be performed before Palestine could request the arrest of wanted Palestinians abroad. The concerned countries will have to carefully study the files of the Palestinian convicts before extraditing them. Interpol strictly observes its procedural guidelines, which means it will take steps to verify that the extradited fugitives will not face torture in the prisons in their home countries.”

Muhammad Shalaldeh, a professor of international law at Al-Quds University, told Al-Monitor that contrary to what many believe, Interpol has no agents that are able to make arrests. It is an international network of law enforcement agencies providing database and communication assistance in pursuing individuals wanted on suspicion of criminal activities. It is not Interpol's role to track individuals on the basis of religious or political issues.

He added that Interpol helps in extraditing wanted individuals and does not prosecute them.

The concerns of Abbas’ rivals abroad are not baseless, as the judicial authorities in the Palestinian territories have charged them with criminal offenses. But as Abdul Sattar Qassam, a professor of political science at An-Najah University, told Al-Monitor, “The PA should take advantage of becoming a permanent member in Interpol to fight crime and not seek to use the organization to track down and arrest its rivals.”