Some 4 million Syrians scattered across Turkey are among the most vulnerable to the novel coronavirus pandemic and its economic fallout as most of them are unable to work due to restrictions and also cannot benefit from relief assistance. 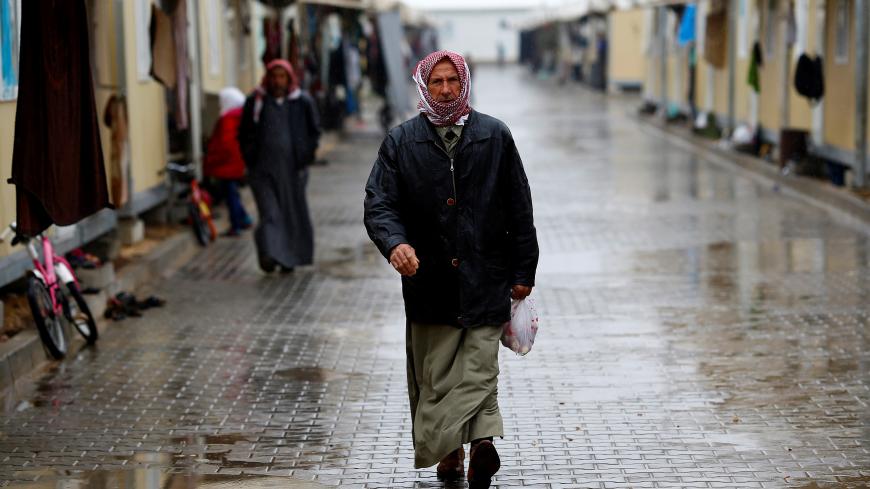 DIYARBAKIR, Turkey — Abdullah Ahmed and his family were living in Damascus before the outbreak of the Syrian civil war nine years ago. Fleeing the war, he and his family resettled in Turkey’s southeastern province of Diyarbakir near the Syrian border. Following a few devastating years, the family gradually managed to get on their feet and rebuild their lives. Ahmed was admitted to the nursing school at a Diyarbakir university in 2011 and began working at an air conditioning repair service during weekends. He and his two siblings were the breadwinners of their family of eight until the novel coronavirus pandemic hit and turned their world upside down once again.

Ahmed’s story illustrates the plight of some 4 million Syrians scattered across Turkey who are among the most vulnerable to the pandemic. Most of the refugees have been unable to work due to broad restrictions instituted because of COVID-19 and the resulting economic fallout. Since most of the Syrian workers — estimated at more than 1 million — had been employed as unregistered laborers, they are unable to receive unemployment benefits from the government’s relief measures introduced to help workers in the formal economy. The pandemic has also affected their dreams of a better future, since distance learning is a challenge for most of them due to language barriers and a lack of resources.

Large number of the refugees are living in Turkey's conflict-ridden southeast region due to its proximity to Syria. According to Turkey’s official Immigration Administration, more than 22,000 of these refugees, including the Ahmed family, live in Diyarbakir, the largest city and main commercial hub of the mainly Kurdish southeast.

Ahmet recounts that he was laid off from his weekend job at the repair service soon after the outbreak hit, noting that his family of eight is now relying on the income of a sibling who has been lucky enough to work from home. Many Syrians have been employed in jobs that cannot be done remotely, such as in the agriculture, construction and textile sectors and labor-intensive industries.

“Even though his wage is not enough to meet our needs, there is nothing to do but accept,” Ahmed, who does not leave the house in order to protect the older members of his family, told Al-Monitor by phone. “Frankly, it is not enough, but we have to manage it somehow as we receive no other assistance from anywhere else.”

People in Turkey are required to wear masks when shopping or visiting crowded public places as part of efforts to combat the spread of the virus. The government is offering free face masks to the Turkish citizens free of charge, yet refugees have been unable to benefit from this service too. Ahmed says they have nothing to do except stay home to protect their elders, adding that on rare occasions, a single family member will leave the house to shop for essentials.

A sophomore at the Nursing School of Dicle University, Ahmed is trying to continue his education through distance learning, but it’s not easy.

“We are taking distance learning classes. It is no substitute for in-school learning, but it is better than nothing,” he said. “It was better when we were at school face to face with teachers but it’s not possible now.”

Anwar Shiekh and his family are facing similar difficulties. After fleeing the northwestern Syrian province of Aleppo in 2015, Shiekh has been living in Diyarbakir for five years. A senior studying Arab Literature at Dicle University, Shiekh was working as a part time salesman in a clothing shop at a Diyarbakir mall until the outbreak hit. He was left out of work after the mall was shut down as part of efforts to stop the spread of the virus. His brother faced a similar fate.

He and his parents, who are self-isolating at home due to their advanced age, are now trying to survive by relying on their savings.

“In the past, I was working and I was able to provide for myself and my family. But now both the job and school is over. Not just us, everybody is in the same situation, but ours is slightly more difficult. We have to pay rent,” he told Al-Monitor by phone. “God willing, this outbreak ends soon, so that we can go back to our work. Otherwise we hardly survive. Currently, we cut half of our costs to keep on. Nobody works at the house, our landlord allowed us to pay half-rent.”

“If it goes on like this, we have no choice but return back to Syria,” said his cousin Izzaddin Shiekh, stepping into the conversation.

Yet, according to Anwar, returning back is no option. “Since my mom and dad are old, I don’t take any risks, and I go out only to buy essentials,” he said. “We don’t receive any support, neither money nor food assistance. We applied for the support but to no avail. We have no hope.”

The outbreak has also disrupted his college education as they do not have a computer at the house. He is trying to join distance-learning classes via his mobile phone.

“But it is no substitute for a computer, much harder to follow via phone. I understand nothing, I would be able to understand better if I have a computer,” he said.

Mohammed Haidar al Abid, 17, was working in an industrial zone as an unregistered laborer before the government imposed a nationwide curfew on people aged 20 and younger. Although the Interior Ministry made an exception for those who are working, Abid was unable to benefit from the exception as he was working illegally. He and his older brother, who lost his job as a waiter at a Diyarbakir cafe due to the closure of all cafes and restaurants nationwide, were the sole breadwinners of their family. The older brother, however, was able to fill the younger brother’s job in the industrial zone and is now trying to keep the family ship afloat.

Civic groups, meanwhile, warn that Syrians, and all refugees in general, have been suffering from further neglect amid the pandemic. According to Can Isal, a lawyer for an Istanbul-based refugee relief organization, Support to Life, immediate action is required. Highlighting that the pandemic not only threatens the livelihoods of the Syrians, but all refugees in Turkey, Isal has called on authorities to increase financial and educational support to the refugees.

“Economically, refugees are facing higher risk than Turkish citizens. The first reason for that is most of them are unregistered wage earners, thus they are laid off more easily than those who work legally,” he told Al-Monitor. “Furthermore, unable to benefit from relief funds introduced for those who lost their jobs, these people [refugees] are being left with no protection at all.”

Refugee children are further struggling with remote learning as the distance exacerbates the problem of “the language barrier” and the “educational gap” with their non-refugee peers, Isal said, adding that some refugees do not have the means, such as a computer or even a television, to access distance learning.

“Additional financial support measures need to be taken and refugee health centers should be strengthened,” he told Al-Monitor.

Isal also highlights that coronavirus awareness should be raised among the refugee population.

“Public awareness campaigns should be multilingual. Frequently visited guidance websites, leaflets, should be translated to native tongues of the refugees, particularly Arabic and Farsi,” he said.

Turkey provides free COVID-19 treatment to all of its citizens and refugees alike. Yet Isal said that refugees, particularly Afghan and Iranian ones, are having further difficulty accessing non-coronavirus related health care services in the pandemic-hit health system.

Pointing out that the Turkish authorities are continuing with deportations amid the outbreak, he added, “Deportations have to be stopped immediately."