Officials issue call on Palestinians to help with the growing social and medical expenses from the coronavirus outbreak. 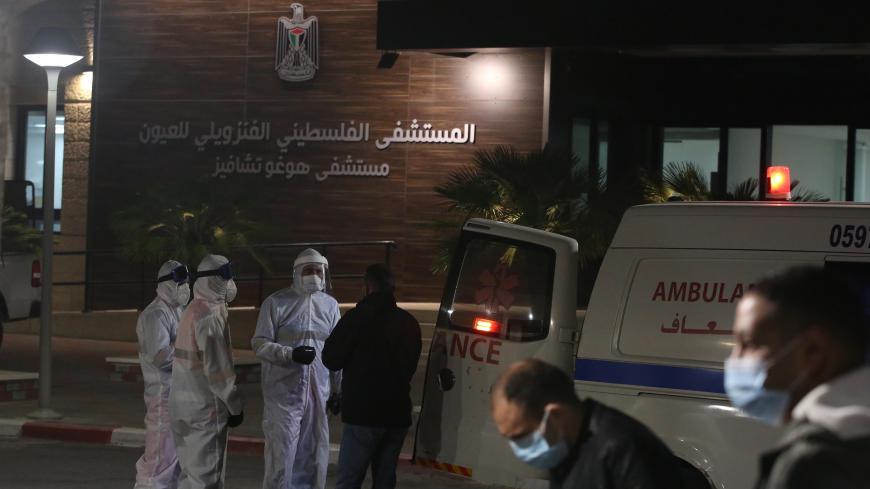 Health care personnel look on as 11 patients who had been infected with the novel coronavirus are being discharged from the Hugo Chavez Hospital following their full recovery, Turmus Ayya, West Bank, April 7, 2020. - Issam Rimawi/Anadolu Agency via Getty Images

RAMALLAH, West Bank — The Palestinian government is soliciting donations from the private sector and individual citizens for a fund to help deal with the social and health damage caused by the coronavirus outbreak in the Palestinian territories.

The Waqfat Izz (Dignified Stand) fund began accepting donations in early April and within hours had received $7 million, officials said, adding that they hope to more than quadruple that figure.

The first meeting of the fund's board, which includes 30 businessmen, was held April 6 in Ramallah. Fund director Talal Nasreddine called on the Palestinian private sector, businesses, organizations and individuals in the Palestinian territories and abroad to unite their efforts and donate to support families in need and to overcome the crisis with the least damage possible.

The government hopes the fund will be a key financial source to help it bear the financial burden resulting from the coronavirus outbreak. Officials expect a financial crisis this month, as government revenue is expected to drop by more than 50%, Prime Minister Mohammad Shtayyeh said at a March 29 press conference. As a result, the government adopted an austerity emergency budget.

Nasreddine told Al-Monitor, “We are banking on our people in the Palestinian territories and abroad to collect funds reaching $30 million that will be allocated to help poor families through the Ministry of Social Development and Ministry of Health. ... The ongoing spread of the virus portends increasing needs in all sectors.” The Ministry of Health will also use the money to fund its medical needs, he added.

“Any poor family can submit a demand to the Ministry [of Social Development] for help. The ministry’s staff then verifies the family’s economic situation, and we give them the specified aid from the fund. Within a few hours after donations were launched, the fund collected $7 million. Many businessmen or organizations that had previously announced their intention to donate can now deposit their donations in the fund’s bank account.”

The fund's board is communicating with businesses in the Palestinian territories and abroad, and is preparing a media and advertising campaign to encourage citizens to donate, according to Nasreddine, who added that money will be distributed the last week of April, as the monthlong observation of Ramadan begins April 23.

Nasreddine stressed that the fund is being monitored to ensure transparency. "We have an external auditor who will scrutinize each financial movement in the account," he said.

Regarding the private sector’s ability to feed the fund with donations, Nasreddine said, “The current business halt and lockdown have taken their toll on the private sector, and its suffering is far from over, amid expected economic setbacks if the coronavirus crisis persists. But, in the end, our people have to help each other.”

President Mahmoud Abbas announced a state of emergency March 5 when the first cases were reported in the Palestinian territories. The Palestinian Authority (PA) has implemented quarantines and restrictions on movement to stem the spread of the novel coronavirus. These measures have hurt businesses, and more than 50,000 Palestinian families have been affected economically. Many families' incomes have now fallen below the poverty line because of the restrictions.

Minister of Social Development Ahmad Majdalani told Al-Monitor, “The coronavirus pandemic has had economic and social repercussions on the Palestinian territories, and many families have been hit hard by the crisis. We are facing social pressure, with the declining financial capacities of the Palestinian government.”

During the first month of the coronavirus crisis, 53,000 families needed financial and food aid, he said. That number is expected to double within a month if there aren’t any positive developments.

Osama Amro, secretary of the Private Sector Coordination Council and chairman of the Palestinian Businessmen Association, told Al-Monitor the Waqfat Izz fund shows that the private sector has not given up on its community, and that its contribution, though not a solution, is symbolic.

He added, “The current crisis outweighs the capacity of the private sector, but the fund will help many poor families in need.” He noted that, two months in, weathering the crisis will require billions of dollars.

He said the private sector has been hit hard by the coronavirus pandemic, as most of the sector is based on small businesses run by families or individuals for sustenance.

Amro expects the losses of the private sector to exceed $3 billion if the crisis lasts four months, thus affecting all Palestinians. The fund aims to show social solidarity, cooperation and empathy. The target donors are large companies and businesspeople with good finances.

The financial crisis in the Palestinian territories will get worse before it gets better in the coming two months for several reasons. The government cannot pay full salaries for its employees, and thousands of Palestinians working in Israel are confined to their homes. Consequently, spending and financial liquidity in markets have dropped, with the strict measures hampering many workers in the local market. This will only widen the circle of poverty and need.