How is Palestine dealing with added hunger, poverty from COVID-19?

Thousands of new Palestinian households fell below the poverty line due to COVID-19 which is an additional challenge to the government’s efforts in the fight against the epidemic and ramifications on the community. 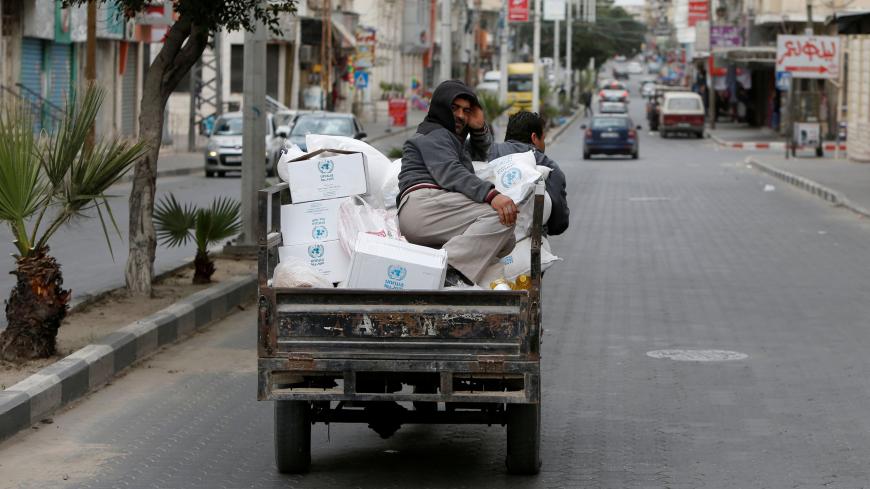 GAZA CITY, Gaza Strip — The state of emergency declared March 5 by the Palestinian Authority (PA) after COVID-19 cases were confirmed in Bethlehem and the subsequent lockdown have disrupted local economies and prevented laborers from going to work in Gaza, the West Bank and Israel. In the Palestinian territories, the economic hardship stemming from the pandemic serves to exacerbate problems for Palestinians already suffering from prolonged economic crisis, raising concerns of families not having access to sufficient food or financial aid programs.

Among those struggling is Fares Mansour, who recently had to sell his wife's engagement ring to put food on the table for her and his four children. “I used to work in a restaurant in Gaza City for 30 shekels [$9] per day, which, even then, was not enough to meet my family’s daily needs,” he said. “Yet, the restaurant, as well as other diners, closed since COVID-19 cases were confirmed in the Palestinian territories. Like the rest of the restaurants’ workers, I became unemployed.”

Gaza recorded its first case of the novel coronavirus on March 22, prompting Hamas, which controls the territory, to issue orders the same day shutting down all cafes. Mansour complained, “It has been weeks since I became forcibly unemployed. No one has offered me any assistance.”

Some 53,000 Palestinian families have fallen below the poverty line since PA President Mahmoud Abbas announced the state of emergency. The total number of households living in poverty currently stands at 115,000, Social Affairs Minister Ahmad Majdalani said at a press conference in Ramallah on April 15. “These figures could increase at the end of the month,” he stated. Of the total recorded, 80,000 are in Gaza.

“We launched on April 14 a relief plan for poor households in the Palestinian territories,” Majdalani told Al-Monitor. “The plan aims to disburse 136 shekels [$38.30] in cash assistance per person.” He said the funds — consisting of a 3% contribution from the World Bank, 39% from the European Union and 58% from the PA — will be disbursed every three months. Majdalani's ministry is responsible for collecting data on families affected by job losses related to COVID-19 in order to organize cash and food assistance for them, Majdalani remarked.

“Preparations are underway to launch a program designed to help women working in nurseries,” Majdalani remarked. “About 1,245 women employed in 265 nurseries, which shut their doors to prevent COVID-19 from spreading among the children, were identified.” Such women are likely the main economic providers for the families.

Despite the hardship imposed by the shutdowns, Naser Qatami, deputy labor minister in Ramallah, told Al-Monitor, “It was of utmost necessity for the workers to be quarantined at home in order to win the fight against the coronavirus.”

He explained that workers and those in close contact with them constituted up to 75% of the coronavirus cases in the Palestinian territories, at the time 230 of the 307 confirmed cases. “The vast majority of the infected laborers were working in Israel, and they caught the virus while there,” he claimed. Two hundred twelve cases stemmed from Palestinians working in Israel.

According to Qatami, some 180,000 West Bank Palestinians were working in Israel, and around 150,000 of them returned to the Palestinian territories and self-quarantined. The rest ignored the PA’s call to remain at home and self-isolate, choosing instead to remain in Israel in the hope of continuing to earn much-needed money.

Qatami remarked that his ministry will soon launch a fund to provide monthly financial assistance to laborers no longer able to work. The first phase will cover 30,000 workers and by the end of the year include all affected workers. A worker whose family falls below the poverty line could thus receive monthly assistance from both the Social Affairs Ministry and the Labor Ministry.

Meanwhile, UNRWA, the United Nations Relief and Works Administration, has faced difficulties raising funds to help combat the coronavirus epidemic. Adnan Abu Hasna, an UNRWA spokesman in Gaza, told Al-Monitor, “We made an appeal to the world that they provide us with an emergency budget of $14 million to fight the coronavirus and its repercussions in the 58 Palestinian refugee camps located in our five areas of operation. Yet, we only obtained 30% of the amount, which was allocated to the health sector.”

He said there are no relief and food programs to provide additional assistance to the families of those who lose jobs because of the epidemic. According to Abu Hasna, UNRWA provides food aid to about 900,000 registered refugees in the West Bank and Gaza who are living below the poverty line, but cannot add the newly poor because its own financial crisis.

The limitations of official Palestinian and NGO efforts in dealing with the repercussions of the coronavirus outbreak have prompted activists and volunteers to launch individual initiatives to collect donations from the more fortunate and distribute them to poor families now without a source of income.

In one week, Zaki Madoukh along with other volunteers in Gaza City managed to collect $12,000 in donations from businesspeople inside and outside Gaza. They then used the funds to prepare and distribute baskets of food, including meat and vegetables, to less-fortunate shop owners.

Madoukh told Al-Monitor, “Our volunteer initiative targeted the owners of small enterprises whose work stopped because of the coronavirus in the Gaza Strip.” The initiative is ongoing.