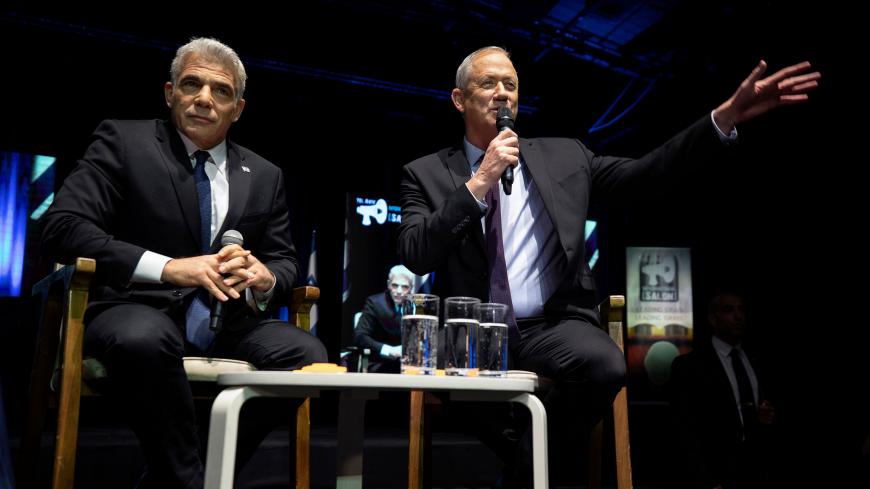 Until less than a month ago, Blue and White leaders Benny Gantz and Yair Lapid were partners, together leading a major party established with the goal of toppling Prime Minister Benjamin Netanyahu. But as of the morning of April 20, Gantz and Lapid are officially rivals, fighting over the same center-left electorate. Judging by the attack led by Yair Lapid, now the head of the Yesh Atid/Telem Knesset faction, against what’s left of Blue and White, this political divorce is already ugly and there's more to come.

The partnership ended on March 26 after Gantz agreed to negotiate the establishment of an emergency unity government with Netanyahu. Relations between Blue and White’s leader and his former No. 2 became strained, but Lapid hoped that Gantz would come back to his senses and cooperate with him against Netanyahu. That did not happen and Gantz continued negotiating. Coalition talks have been rocky in the past few days. It now seems that a deal has been signed.

The duel between Lapid and Gantz opened on April 19 at an anti-Netanyahu demonstration that took place at Tel Aviv's Rabin Square. The key speakers were Lapid and his Yesh Atid/Telem colleague Moshe Ya’alon. Some 2,000 people participated in the demonstration, held under strict social distancing instructions. The demonstrators, standing at least a meter apart, wore black shirts and waved black flags.

Addressing the demonstrators, Lapid attacked Gantz, who he had until recently endorsed as the best candidate for premiership. He blamed him for dismantling Blue and White and supporting the formation of a government to be headed by a politician indicted for bribery, fraud and breach of trust.

This morning, while Netanyahu and Gantz met briefly at the prime minister’s residence in an attempt to advance negotiations, Lapid tweeted, "Either you are fighting corruption, or you are part of it. Blue and White chose its side." Lapid’s jab at Gantz was just the beginning. One after another, Yesh Atid Knesset members attacked Gantz from the parliament’s podium.

The Blue and White's people have so far avoided responding to the harsh attacks on Gantz. But according to sources in the party, Gantz and his current No. 2 Gabi Ashkenazi have criticized Lapid sharply in closed circles. A senior party source told Al-Monitor that Ashkenazi is fed up with Lapid's knee-jerk rejection of coalition talks and refusal to realize that the novel coronavirus has reshuffled the cards such that the public at large demands a national unity government.

Netanyahu is watching satisfied from the sidelines, knowing the bickering means that if a fourth election is called, the center-left camp would be divided to his advantage. In fact, now that a deal has been signed, the rift between Gantz and Lapid is expected to grow even further, with Lapid becoming Gantz' opposition.