The latest deal will allow Netanyahu to stay on as prime minister for the next 18 months while ensuring a leadership position for three years. 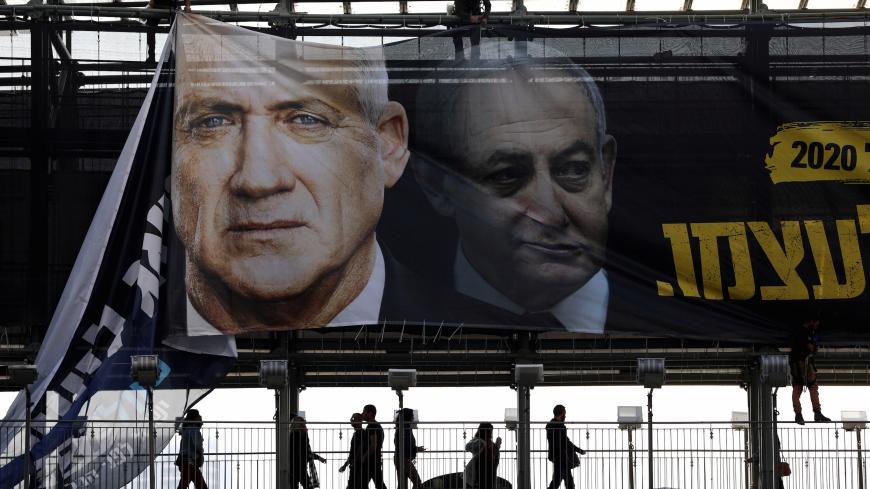 Laborers hang a banner depicting Benny Gantz, leader of the Blue and White party, and Israeli Prime Minister Benjamin Netanyahu, as part of the party's campaign ahead of the upcoming election, in Tel Aviv, Israel, Feb. 17, 2020. - REUTERS/Ammar Awad

After a year and a half of a constitutional and political crisis that drove Israel into three elections, Prime Minister Benjamin Netanyahu and Blue and White leader Benny Gantz reached a deal for a coronavirus-emergency government, with a rotation agreement between the two politicians.

Netanyahu and Gantz signed the deal after weeks of exhausting negotiations, during which Netanyahu seemed to retract from understandings agreed upon by himself and Gantz.

Reports on the agreement were limited, even though it constitutes a political drama, since the announcement was made only half an hour before the official opening of Holocaust Remembrance Day ceremonies.

"We have prevented a fourth election. We will protect democracy. We will fight coronavirus and care for all of Israel's citizens," Gantz said after signing the deal.

According to the deal, the new unity government will last three years. Netanyahu will serve as premier for 18 months, with Gantz serving as defense minister and also appointed deputy prime minister. After 18 months, Gantz will automatically take over the position of premier, with Netanyahu serving as deputy prime minister. Being indicted, Netanyahu won’t be able to serve as a minister when Gantz heads the government.

It was also agreed that the coalition will advance a law enabling Netanyahu to serve as deputy prime minister despite being charged. Netanyahu’s trial on charges of bribery and breach of trust is expected to open this May. Thus, the deal signed this evening constitutes a real achievement for Netanyahu. He is now sure to occupy senior positions in the coming three years while at the same time conducting his legal defense.

The agreement stipulates that if the Supreme Court disqualifies Netanyahu from serving as prime minister or as deputy prime minister because of the charges against him, fourth elections will be declared. But the chances of that happening are slim. The Supreme Court would likely hesitate to take such a dramatic decision, which would be perceived as interfering with the democratic election process.

The agreement reveals that the new Cabinet would be the largest to govern Israel, with 36 ministers, equally distributed between the Likud and Blue and White. The same would be true for the Security Cabinet. Netanyahu and Gantz also agreed to set up a special coronavirus-emergency forum, which they would lead jointly.

The deal also offers Gantz several achievements. The justice minister position — a role so dear to Netanyahu — would now be in Blue and White’s hands, with Avi Nissenkorn as minister. In all, Blue and White will get 16 ministerial portfolios, including foreign affairs, with Blue and White’s No. 2, Gabby Ashkenazi, as minister. Under the terms of the deal, the party will appoint one Arab minister (not party member) within the quota of portfolio allocated to them.

Another issue that generated disagreement during the talks, and is now resolved to the satisfaction of the right-wing camp, is annexation. The implementation of Israeli sovereignty over lands of the West Bank will be in accordance with President Donald Trump’s plan. Implementation of sovereignty should be possible as of July (after a vote in the Knesset).

The next step is for the sides to anchor the coalition agreement legally with amendments in certain laws. According to prevailing estimates, this should be accomplished within two weeks, enabling then to swear in the new government. Netanyahu and Gantz both will be sworn in as prime ministers.

The way things look, Yesh Atid leader Yair Lapid will serve as chairman of the opposition. Lapid, who has been Gantz’s leadership partner since the inception of Blue and White, has now become his rival.