Annexation of the Jordan Valley is a long-standing Israeli objective, going back to Prime Minister Yitzhak Rabin. 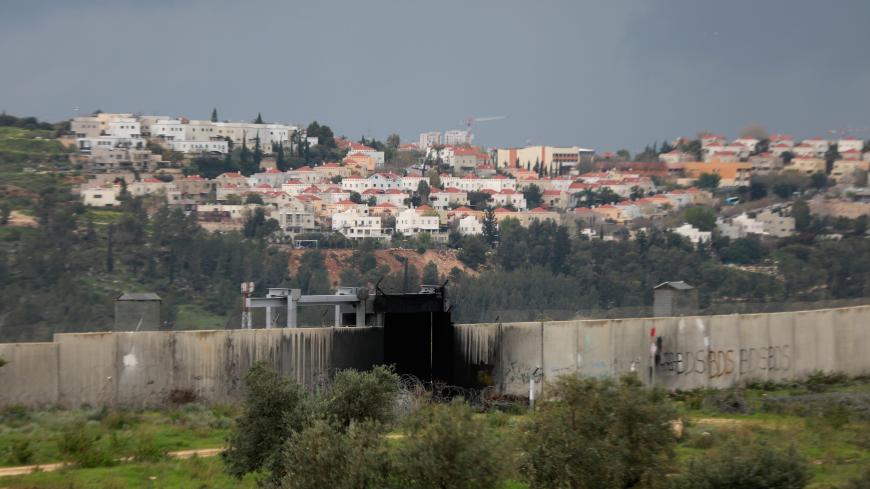 A view shows the Jewish settlement of Modiin Illit in the background and the Israeli barrier in the foreground in the village of Bilin, where a Friday anti-Israel weekly protest is held, as the area is seen empty of Palestinian demonstrators amid concerns of the spread of the coronavirus disease, in the Israeli-occupied West Bank March 20, 2020. - REUTERS/Mohamad Torokman

Israeli Prime Minister Benjamin Netanyahu’s plan to annex the Jordan Valley is not just a far-right wish, but the fulfillment of long-standing Israeli security objectives.

Further, despite alarms by Netanyahu's critics in the United States and elsewhere about the plan, there is actually widespread agreement among Israelis about the strategic importance of the valley. ‪That’s why Blue and White leader Benny Gantz could sign off on the deal to form an emergency government. The consensus extends to Labor and even members of the opposition to the new national unity government. The extension of Israeli law to the Jordan Valley is in accordance with former Israeli Prime Minister Yitzhak Rabin's strategic tenets (the Allon Plan). Notably, more Israelis view the Jordan Valley as an indispensable defensible border than the Golan Heights.

Defensible borders are particularly necessary considering that the threats to Israel’s population centers and its strategic installations have increased in the 21st century. Iran hopes to establish a “Shiite Crescent” from the Gulf, via Iraq, Lebanon and Syria to the Mediterranean. Iran’s objective is to turn Syria, Lebanon and Iraq into launching pads for missile and terror attacks against Israel. Iran also plans to destabilize the Hashemite Kingdom of Jordan and create a land bridge to the Palestinian Authority (close to Israel's heartland) in order to enhance its ability to harm Israel.

The Jordan Valley is the only available defensible border on the eastern front, and the closest to Israel’s heartland — the Jerusalem-Tel Aviv-Haifa triangle. This area holds 70% of Israel’s population and 80% of its economic infrastructure. The distance between the Jordan River and Jerusalem is only 30 kilometers (19 miles).

Israeli military presence in the Jordan Valley allows control over the very few roads going westward through a mountainous region, enabling a small defending force to easily block an armored invasion of the Land of Israel by placing anti-tank weapons at the entrance of these roads in the valley.

The strategic imperative is complemented by demographic realities. Relatively few Arabs live in the unhospitable desert-like valley. Therefore, inclusion of this area into Israel does not burden the Jewish state with a demographic problem.

Some analysts claim that Israel no longer needs the Jordan Valley as a shield against aggression from the east. They argue that the peace treaty with Jordan neutralizes the threat of the eastern front and its proximity to Israel's centers of population and economic infrastructure. Moreover, they argue that the demise of the Saddam Hussein regime in Iraq, the weakening of war-torn Syria and the impressive stability of Jordan amid turmoil in the Arab world renders the eastern threat a thing of the past.

Yet this perspective ignores the immense potential for political upheaval in the Middle East, as demonstrated during the so-called (and mislabeled) Arab Spring upheavals. The destabilization of Hashemite Jordan and Saudi Arabia and the rise of a radical Syria are not far-fetched scenarios. Moreover, the American disengagement from the Middle East allows greater freedom of action for Islamist elements to take over American allies. The reemergence of the eastern front as a security threat could become a reality.

Advocates of turning over the Jordan Valley to the Palestinians discount its topographical importance by referring to current military technology that allows precision strikes from a distance. They argue that the ability to launch defensive strikes from the coast eliminates the strategic need for the Jordan Valley. Yet such an argument overlooks the history of military technology, which shows a clear oscillation between the dominance of offensive or defensive measures over the centuries. The belief that modern technology, which indeed temporarily reduces the importance of topography, will remain unchallenged constitutes a dangerous strategic fallacy. Designing stable defensible borders in accordance with current but transient technology and political factors is strategically foolish.

If Israel wants to maintain a defensible border along the Jordan Valley it also needs to secure the highway from the valley to the coast via an undivided Jerusalem and the West Bank town of Maaleh Adumim. This is the only west-east axis with a Jewish majority and the only safe route through which Israel can mobilize troops from the coast (where most Jews live) to the Jordan Valley in case of emergency.

Maaleh Adumim (established by Labor in 1976 under Rabin) serves as the linchpin in establishing a line of defense along the Jordan Valley against aggression from the east. Connecting Maaleh Adumim to Jerusalem through construction in E-1 (5 kilometers, or 3 miles, of empty desert land) will secure the road to the Jordan Valley and prevent the division of Jerusalem. Jerusalem’s importance to the Jews is not only historical and religious, but also strategic. It controls the only highway from the Mediterranean to the Jordan River Valley along which Israelis can travel safely.

Political circumstances seem ripe for an Israeli decision to incorporate the Jordan Valley. This position, which commands the support of a majority of the Israelis, will likely be backed by the Trump administration, adding an important layer of international legitimacy to Israel's insistence on secure borders. The Trump peace plan recognized Israel's needs for defensible borders by recognizing Israeli sovereignty in the Golan Heights, and by suggesting the incorporation of the Jordan Valley.  So those backing annexation are hopeful the United States will give the OK.

Most Arab states are unlikely to make a fuss about the Israeli move. Faced with the threat from Iran and the possibility of the United States pulling troops from the region, Israel remains a regional bulwark against Iran's aspirations to achieve regional hegemony.

Despite formal statements, Jordan prefers Israeli permanent presence in the Jordan Valley, fearing a neighboring Palestinian political entity that could develop into another Hamas-controlled Gaza. Since the signing of the peace agreement in 1994, Jordan's dependence on Israel has increased. Israel supplies increasing quantities of water, far beyond its obligations, and also supplies natural gas. In addition, the Israeli lobby in Washington is working overtime to secure US economic aid to Amman.

Amman does face domestic opposition to bolstering its relations with Israel. But Amman's political ability to handle the prevailing anti-Israeli sentiment in Jordan cannot be discounted. Unlike other Arab nations, Jordan weathered the Arab Spring well, so the government can be trusted to manage its affairs and remain in power. Jordan even signed a peace deal with Israel that annexed East Jerusalem, and Jerusalem is considered more important than the Jordan Valley.

Palestinian opposition to an extension of Israeli law to the valley is irrelevant. The lengthy negotiations with the Palestinians have led nowhere and there is Israeli consensus that the Palestinian national movement is not ripe for accepting a historical compromise with the Jewish state. Their procrastination in adopting a realistic compromise with the Zionist movement has left them so far invariably with less territory than had previously been offered to them.

The current national unity government has an opportunity to realize Israel's security needs for a defensible border in the east with the support of the world's top superpower. In one of the ironies of history, Netanyahu might implement Rabin's strategic legacy.

For a different take on this issue, check out Ben Caspit’s latest piece.