Iraq receives another short waiver to US sanctions on Iranian gas

The United States granted Iraq 30 more days to continue importing Iranian gas in contrast with longer sanctions waivers in the past. 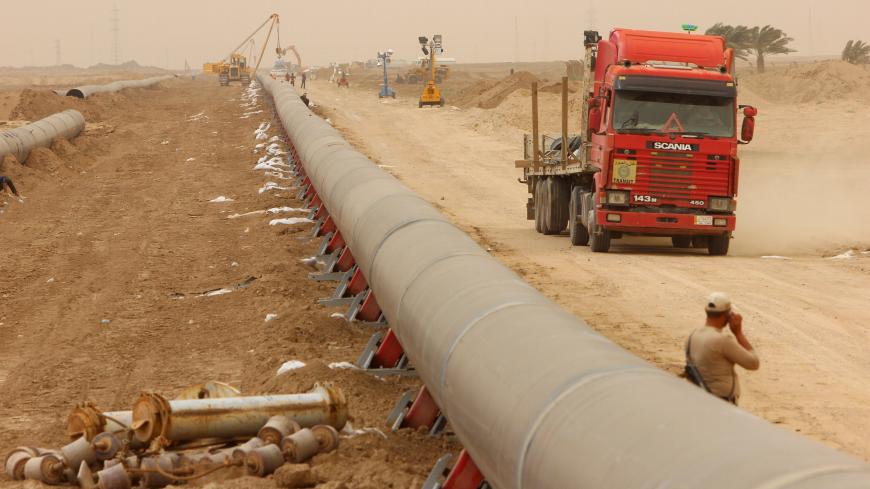 Workers set up a natural gas pipeline during a dust storm at Iraq's border with Iran in Basra, southeast of Baghdad, April 12, 2016. - REUTERS/Essam Al-Sudani

The United States has granted Iraq an added waiver for compliance with sanctions against Iran, allowing Baghdad to continue importing gas and electricity from the Islamic Republic for 30 more days.

The US State Department informed the Iraqi government of the waiver by phone, The Associated Press reported today.

The Donald Trump administration first threatened countries that rely on Iran for their energy needs with sanctions last year, originally granting a number of nations temporary waivers. The move has been part of the administration’s plan to confront Iran after Trump withdrew from the Iran nuclear deal in 2018.

Some Iraqi lawmakers and pro-Iran militias have sought to expel US forces in the country since a series of escalatory exchanges started in December 2019; these included the US killing of Iranian military leader Qasem Soleimani in Baghdad in January. The expulsion efforts have mostly stalled; the US military is in Iraq as leader of the global anti-Islamic State coalition and there is a consensus among most Iraqi officials on the need to continue cooperation with the coalition. The United States still has forces in the country but has pulled out of several Iraqi bases this year.

Iraq must prove it is making efforts to reduce its reliance on Iran for energy to continue qualifying for waivers. Iraq depends on Iranian imports to meet one-third of its energy needs. Iraq is considering importing gas from the autonomous Kurdistan Region in the north as an alternative, but an arrangement is at least months away, according to AP. The Kurdistan Regional Government is currently in a row with Baghdad over oil it is supposed to turn over to the federal government in order to receive its share of the federal budget.

Oil-rich Iraq has a troubled electricity system, and most of the country is without power for multiple hours on a daily basis. The use of generators to provide power when government electricity is off is widespread. The energy issues are amplified in the blazing hot summer, when temperatures can rise to well above 100 degrees Fahrenheit (37 degrees Celsius) and people use fans, air conditioning units and water vapor systems to stay cool.

Iraq’s government is in flux as Iraq’s Prime Minister-designate Mustafa al-Kadhimi continues to seek consensus among Iraq's political power brokers on a Cabinet. Kadhimi is the third person designated to be prime minister, and the previous two candidates withdrew their nominations after failing to form a Cabinet approved by parliament. Current Prime Minister Adel Abdul Mahdi first offered to resign in November amid massive anti-government protests across the country, but has remained in office as part of a caretaker government.