There is great skepticism in Iraqi society and in the media about the government’s statistics of how many people have been infected by and died from the coronavirus. 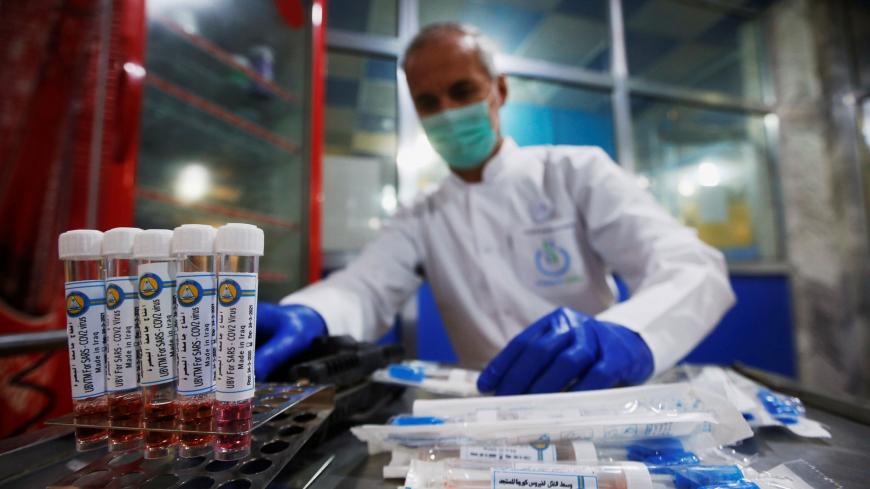 Iraqis are highly skeptical of the statistics announced by the Iraqi government regarding the country's number of coronavirus cases. This doubt is evident in media reports and blogs of journalists and activists on social media.

Health Minister Jaafar Allawi said April 12 in a television interview, “The number of coronavirus cases is subject to international monitoring. Death certificates and forensic medicine are monitored and coronavirus statistics cannot be manipulated in any way.” As of April 14, the country had registered 1,400 cases and 78 deaths, according to a statement by the Health Ministry.

An administrator working at a medical center east of Baghdad said during an interview with Al-Monitor on condition of anonymity, “The numbers that the Iraqi Health Ministry announces daily are not the real numbers. On one day, we recorded more than 30 cases in one health center, but in the evening the Iraqi statistics that were revealed showed fewer cases than those recorded in our center.”

The United Nations mission in Iraq seemed to second this skepticism when it called on the Iraqi government April 3 to support independent reports on the number of coronavirus infections, saying, “The pandemic is an unprecedented global threat that requires strong responses from governments, societies and individuals.”

The UN statement came after the National Media and Communications Commission of Iraq sanctioned the Reuters news agency by suspending its work for three months and fining it $21,000 for an April 2 report that there were more coronavirus cases than the Iraqi government was revealing.

The Health Ministry reacted the same day to the Reuters report — which said “the number of coronavirus cases ranges between 3,000 and 9,000,” as opposed to the official number of 772 at the time — saying, “Publishing such news at this critical time will undermine people’s commitment to the curfew, which means an increased risk of infection and virus spread.”

Despite the great public and media skepticism about the official figures, outgoing Prime Minister Adel Abdul Mahdi defended the government, saying, “We cannot hide coronavirus deaths in Iraq. Questioning procedures is not possible.”

In a different approach to sanction on Reuters, Iraqi President Barham Salih in an interview with CNN's Christiane Amanpour on April. 14, called the decision on Reuters "regrettable", revealing that his legal team is working with to "revoke" the suspension of Reuters.

The representative of the World Health Organization (WHO) in Iraq, Adham Adel, told Al-Monitor, “The WHO numbers in Iraq are not misleading, and we are following the cases and fatalities through specialized staff in the organization and in coordination with the departments of the Iraqi Health Ministry.”

He added, “The WHO and the Iraqi Health Ministry are extremely transparent and clear with Iraqis first and with the region and the world second.”

The public health director of Dhi Qar province, Haider Hantush, said in a press statement, “There are many unreported cases. People are not taking testing seriously.”

The Iraqi Health Ministry has prevented any doctor or health official, except for a few authorized persons, from announcing numbers or infections in the regions and told the media outlets to instead use information from the evening news bulletin every night.

A report published March 30 by the French news agency AFP also said government figures “might be lower than the actual cases.”

A doctor at a medical analysis center who spoke with Al-Monitor this month indicated that such was the case. She told Al-Monitor on condition of anonymity, “The initial survey areas showed hundreds of cases in eastern and southern Baghdad. The problem is that we do not have the ability to deal with these cases, nor do we have the medical staff and logistical capabilities to treat them.”

The doctor added, “The real figures exceed the ones announced, and the Health Ministry and the government are well aware of that. They do not want to announce the real numbers because they do not want to cause public uproar and shock citizens. They are afraid of people’s reactions.”

Iraq’s proximity to Iran, the travel and tourism between the countries, and the countries' many commercial, religious, and personal connections have also led to speculation about the Iraqi figures.

Iraqis’ suspicions and doubts regarding the accuracy of official figures are fueled by past experiences of governmental lack of transparency, especially in crises; this has included information about terrorism. Many people no longer trust government data.

As of April 14, more than 45,000 Iraqis out of a population of 40 million were reported to have been tested for COVID-19; while testing had been done at a rate of roughly 1,500 citizens per day, test numbers appear to be ramping up, in part as a result of Chinese help.