Can Iran's president turn around its economy?

Iran's economic plight — compounded by US sanctions, low oil prices and COVID-19 — depends on risky and difficult reforms for a turnaround. 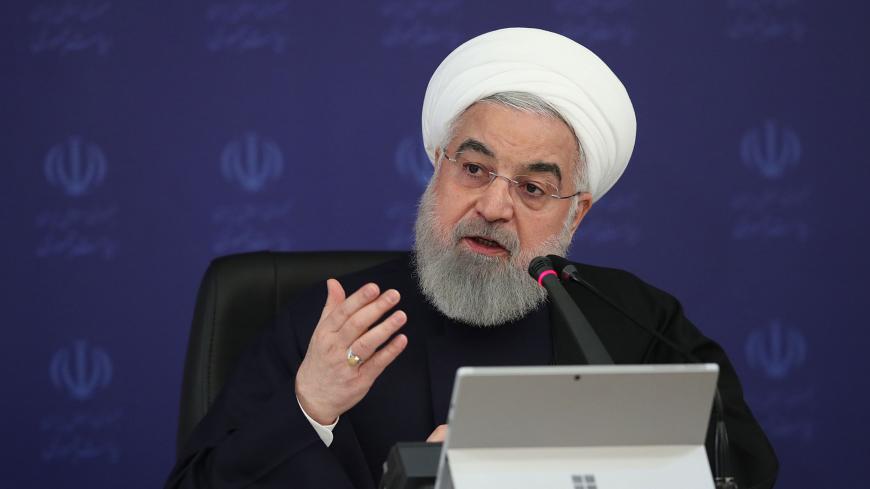 Iranian President Hassan Rouhani makes a statement on coronavirus at the Committee Meeting of National Struggle Against Coronavirus in Tehran, Iran, April 2, 2020. - Presidency of Iran/Handout/Anadolu Agency via Getty Images

While the Iranian government is busy managing the public health fallout of the coronavirus pandemic, there are increasing calls to pay attention to the needs of the country’s economy and to develop a stimulus plan.

But what can the Hassan Rouhani administration do in its current financial position? Not only does it face major financial shortcomings, it also cannot access its own hard currency reserves in international banks, nor can it hope to secure international loans or issue bonds on global capital markets.

As such, the options to stimulate the economy are limited, but borne out of this crisis, possible reforms and restructuring may actually go a long way in stabilizing the economy given the intense challenges ahead — if President Rouhani can pull it off.

It is not a secret that the Iranian government will be squeezed financially. Oil prices have collapsed, and it is also certain that the projected tax revenues won’t materialize, considering the severe impact of the current pandemic on business activity in the country. In addition, President Rouhani announced March 28 that 20% of the state budget for the current Iranian year will be allocated to fighting the coronavirus.

Consequently, the government will face a massive budget deficit and the core question is how this gap will be filled. Intuitively, Iranian administrations always resort to using the resources of the National Development Fund, which clashes with the actual objective of the fund, i.e., to use those funds for long-term investments. Such measures, as well as issuing rial bonds on domestic markets, or further borrowing from the Central Bank of Iran will have massive inflationary impacts and should be avoided in the current crisis. Furthermore, using the most recent benchmark, the government will likely try to maximize tax revenues from businesses — a process that will further push many companies into bankruptcy under the current circumstances. Therefore, an alternative approach is needed, and to be able to design new policies, the authorities should evaluate why their past strategies have failed.

The government’s first policy announcement of the new year shows no sign of new thinking. It has been announced that no import licenses will be issued for products that are produced domestically. Past experience has shown that this type of restrictive approach will pave the way for further corruption and smuggling. Furthermore, eliminating foreign competition in the market will undermine the push for improved quality in domestic production.

Experts agree that there are three major obstacles to implementing a workable stimulus plan in Iran, i.e., sanctions, structural deficiencies and inappropriate policies. External sanctions not only have undermined the performance of the economy, but have also restricted the government’s access to its own hard currency assets in international banks. Assuming that Iran won’t compromise to secure an easing of sanctions, the focus has to be on the other two obstacles.

Among key structural issues is an opaque budgeting system that wastes a significant segment of the country’s resources on shady interest groups. Hesameddin Ashena, senior adviser to Rouhani, recently published a video on social media where he explained how the country’s resources are being misappropriated by allocations to various institutions. Ashena explains how shady interest groups have managed to impose their agenda on the government to regularly receive state funds. Hence, one of the opportunities of the Rouhani administration is to cut off all such allocations in the name of national emergency and dedicate those funds to economic stimuli. Such a move will have to be accompanied by reforms to make state budgets more transparent and to facilitate supervision over expenditures that could be misused by corrupt networks.

Another structural issue that also represents an inappropriate policy is the current exchange rate policy. The multitiered system in which the governmental rate for the importation of essential goods (42,000 rials to the US dollar) is only 25% of the market rate (currently 165,000 rials) mainly functions as a platform for corrupt practices. No doubt that a unification of exchange rates will have a number of downsides, including an inflationary push that will further undermine the economy. But a correction of exchange rates could achieve a number of goals such as improving the government’s overall financial position, reducing the scope for corrupt networks and injecting a certain degree of predictability for the business community, which has always suffered as a result of uncertainties in economic policies. Undoubtedly, a correction of the exchange rates will have to be accompanied by cash transfers to the lower income classes — a process that is feasible considering the fact that a cash handout system is already in place.

On April 1, Rouhani announced that the government will dedicate $10 billion to stimulate the affected economic sectors. While this is a welcome decision, the government needs to devise a strategy to maximize the impact of the stimulus.

With regards to domestic capacity building, the better approach would be to empower domestic industries through positive measures rather than protectionism. This is not always easy, given vested political interests. As the country’s top priority remains tackling unemployment, the government will need to focus on those sectors that have an above-average employment impact, i.e., agriculture and construction. In the last Iranian year, the agricultural sector had experienced growth, partly due to favorable rainfall. It is expected that agricultural activity will contribute positively to GDP growth in the current year. However, the government needs to pay attention to the needs of the sector, especially to supporting the functions of so-called agricultural cooperatives active in procuring needed equipment and supplies for small- and medium-sized farming entities. In line with the potential growth of the agricultural sector, the government will also need to promote investments in the food processing industry, which will also create jobs and export potential to ready regional markets.

Another traditional sector in Iran that can create jobs is handicrafts. While Persian carpets have gained global recognition, there is huge potential in the production of traditional and modern handicrafts, including the processing of precious metals. In fact, the country has invested in developing the mining sector, and, instead of exporting raw materials, the government could empower domestic workshops. Key to both the mentioned policy areas will be the availability of loan facilities as well as an easing of government restrictions on private sector activity. As such, while reforming its own regulations on licensing businesses, the government needs to have clear rules for banks to extend loan facilities to small- and medium-sized enterprises as opposed to wasting the country’s financial resources on large enterprises that are more likely to embezzle such funds.

Considering that profitable sectors, such as tourism, have come to a complete halt and other sectors will also suffer as a result of the pandemic, the government also needs to open up to the development of new sectors. One unique asset that the country has to develop new sectors, especially in the new economy, is the Iranian diaspora. Undoubtedly, the expected global recession will undermine the outlook for many members of the Iranian diaspora who could potentially play a constructive role in setting up new businesses and creating jobs in Iran. To attract key individuals from the diaspora, the government needs to restore a certain degree of confidence in the diaspora by releasing the dual nationals who are unjustly imprisoned, issuing a general amnesty, easing social restrictions and also improving the investment climate. It is a tall order, and many hard-liners will oppose such an agenda, but it is evident that a half-hearted plea won’t materialize the vast potential of the Iranian diaspora.

At the same time, despite a negative economic trajectory, there may be some economic opportunities in the current crisis. For example, the fact that gasoline consumption has more than halved in light of travel restrictions could pave the way for the country to export its freed-up petroleum products to neighboring markets and generate some hard currency revenues.

Furthermore, there are many idle industrial capacities in the country that could be used to manufacture needed medical equipment and eventually export such equipment to regional markets. The government should transfer those idle capacities to the vibrant private sector, offer loan facilities and ease restrictions to generate new capacities.

Obviously, it is still too early to project the overall economic outlook as it is unclear how long the current crisis will last and how far oil prices will fall. Iranians will expect some economic relief from the government, and the constraints are many. Rouhani faces a parliament dominated by conservatives. There is also the legacy of mismanagement and corruption. But all of Iran’s elected leaders will feel the pressure to offer opportunity in crisis, or public confidence will fall even further.