US points to medical and humanitarian exceptions to sanctions policies, blames Iran's mismanagement of economy. 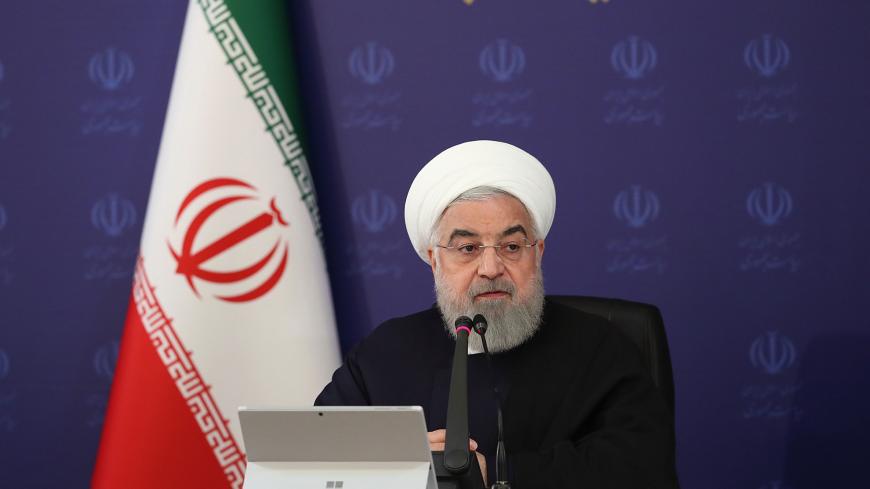 A shared global concern arising from the novel coronavirus pandemic has done little to bring arch-enemies Iran and the United States closer together. Instead, it appears to have further ratcheted up the already bitter war of words.

Iranian President Hassan Rouhani is now accusing Washington of waging “medical terrorism” against his country by denying it access to much-needed medical supplies. “This will linger as a historical disgrace for the American ruling elites, who continue to mount pressure on the Iranian nation under the current circumstances,” Rouhani told a cabinet meeting in Tehran April 8.

With its economy already creaking under financial strains imposed by the US “maximum pressure” policy, Iran has complained that its battle against the coronavirus has been unequal and much tougher than that of other nations. To catch up with the pace of the outbreak, which has killed nearly 4,000 Iranians, Tehran put in a request with the International Monetary Fund (IMF) for $5 billion in emergency loans. While Iran says the request is still being processed, Al-Monitor’s Bryant Harris has been told by a US State Department spokesperson that the White House opposes the loan for Tehran, which “is seeking cash to fund its adventurism abroad, not to buy medicine for Iranians.” US law requires that Washington oppose financial assistance from international financial institutions to countries listed as state sponsors of terror, including Iran.

In his televised address, Rouhani pressed the IMF on resisting US pressure to stonewall the loan. “Neither Iran nor the world public opinion will tolerate discrimination against our country regarding the emergency loan,” he warned, suggesting that as a member state of the international body, Iran is entitled to such loans, the last one of which it received 50 years ago. Rouhani also criticized the United States for “violating” World Health Organization regulations on aiding other states in pandemic preparedness and response planning.

Washington has vehemently denied it is imposing restrictions on Iran-destined medical supplies. President Donald Trump and other White House officials have also spoken of openness if the government in Tehran reaches out for aid. The US State Department released a fact sheet this week under the title "Iran's Sanctions Relief Scam," denying Iran's claims regarding the restrictions on medical aid. Iran’s Foreign Minister Mohammad Javad Zarif has hit back, however, stressing that his country is in no need of “charity” and that all it wants is access to global markets, where it can sell oil and other products and use the income for what it needs.

Seven weeks after its outbreak was officially recognized in Iran, COVID-19 continues its deadly march across the country. Throughout the fight against the pandemic, Rouhani has been accused of minimizing and underestimating its magnitude and rejecting calls for all-inclusive restrictions. His government’s “social distancing” project, according to his critics, has not been robust enough to flatten the curve. Rouhani has now issued a directive on reopening much of the country’s economy as of March 11. And only a week after, the capital Tehran, which has posted the highest mortality and infection rates, will see a significant resumption of pre-pandemic life.

The containment measures are being lifted despite serious cautions from the country’s medical community about a second wave of infections. Alireza Zali, who chairs the Tehran branch of the Committee to Combat Coronavirus, has described fresh jumps in the number of confirmed cases in the past few days as “worrisome.” Zali has warned the Iranian authorities and the public to brace for the consequences of unheeded quarantine precautions over the next two weeks.