Iranian officials said US sanctions have impeded their attempts to secure the purchase of coronavirus vaccines for their country, which remains the hardest-hit in the Middle East. 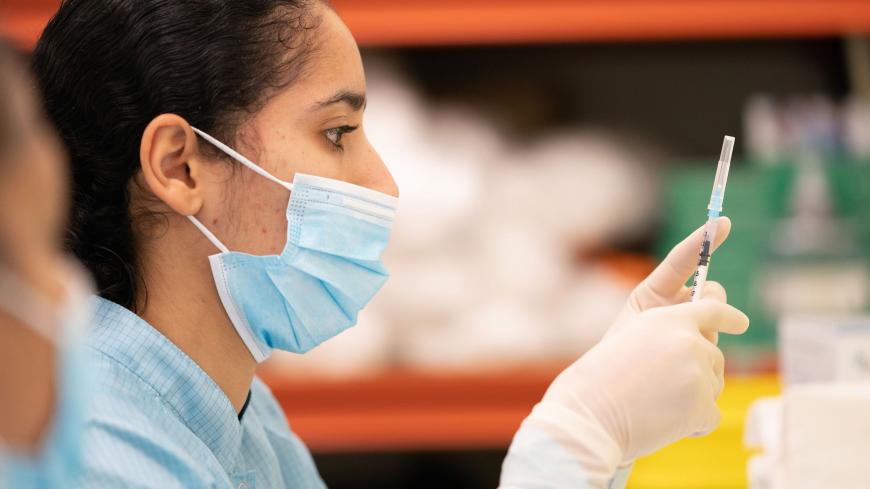 A medical professional prepares a syringe with a dose of the Pfizer/BioNTech Covid-19 vaccine, before it is administered to a patient at Croydon University Hospital in south London on Dec. 8, 2020. - DAN CHARITY/POOL/AFP via Getty Images

As much of the world is slowly moving close to an end to COVID-19 with either producing or ordering doses of coronavirus vaccines, Iranians seem to have a longer way ahead before making it to the other side of the bridge.

From the very onset of the pandemic back in late February, officials in Tehran have denounced US “medical terrorism,” a term they apply to a series of sanctions on medical supplies and pharmaceuticals. They argue that through such measures or pressure on other countries, Washington is hampering the fight against the pandemic in the Islamic Republic. The United States, on the other hand, says Iran’s medical sector has been exempted from sanctions.

In the latest, however, the governor of Iran’s Central Bank Abdolnaser Hemmati described those assertions as “a lie” in an Instagram post that he said was meant “to be recorded in history.” The top banker lamented the failure of all channels to transfer payments to the World Health Organization to order vaccine doses.

This was echoed by Kianoush Jahanpour, the spokesman for Iran’s Food and Drug Administration, who announced plans to purchase 21 million doses from four countries. “While deals have been made for pre-orders, sanctions are casting a shadow over the banking transactions,” Jahanpour said. The conservative daily Khorasan referred to those sanctions as a “coronavirus crime” that has revealed the true nature of the US “humanitarian catchphrases.”

In March, cash-strapped Iran applied for $5 billion in emergency loans from the International Monetary Fund (IMF) to back up its fight against the pandemic. “Due to US pressure and threats, the IMF … did not even dare to take up the request at its executive board,” Hemmati added in his Instagram message.

On Dec. 8, Iran recorded a daily mortality rate of 323. While recent figures have marked a relative respite thanks to a two-week lockdown, Iran seems to be still facing an uphill battle before flattening the curve. The country’s top epidemiologists are warning that despite the improving trend, Iranians will have to brace for a “winter wave” ahead when a fresh resurgence with a ten-time bigger potency could bring the already fatigued medical infrastructure to its knees. The virus has already killed nearly 51,000 Iranians and infected over 1 million more as Iran’s pandemic control policies have been characterized by divisions within parallel decision-making bodies, lack of transparency and prevalent corruption.

The finger-pointing against the United States has, therefore, triggered counterarguments from critics who trace the root cause in mismanagement. In October, Iranian authorities faced serious questioning after officials in neighboring Iraq reported the seizure of 19 truckloads of pharmaceuticals smuggled from Iran.

Against the backdrop of Iran’s official narrative about US medical sanctions, the truck seizures challenged the stance by the Iranian government that the United States is depriving Iranians of pharmaceuticals. The development has also fueled worries among ordinary citizens that even a higher level of corruption could be awaiting the delivery of the coronavirus vaccine, and thus the impact of corruption and sanctions combined, might thrust them at the very end of the global queue to receive the vaccine.