Rouhani hits out at skeptics of Iran pandemic statistics

The Iranian president said skeptics of the official coronavirus narrative in his country are serving as enemy mouthpieces. 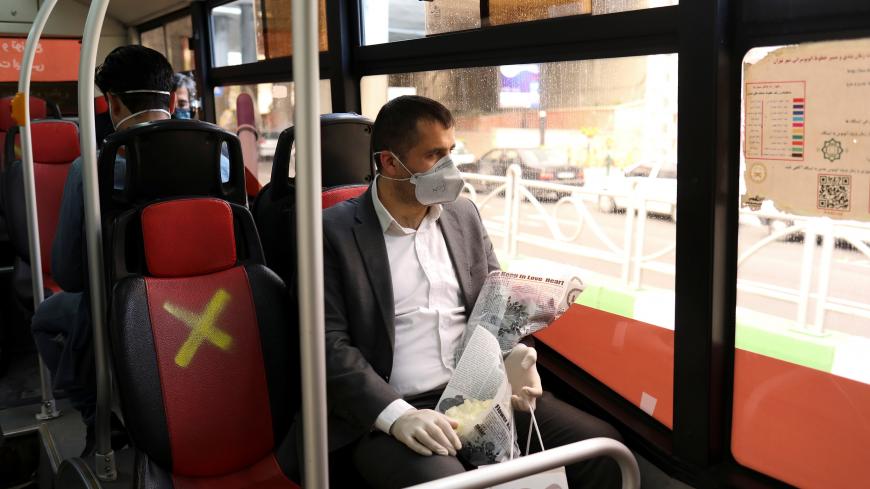 A man wears a face mask to protect against the novel coronavirus as he sits in a bus after shopping malls and bazaars reopened in Tehran, Iran, April 20, 2020. - WANA/Ali Khara via REUTERS

Iranian President Hassan Rouhani has dismissed allegations of cover-up and mismanagement in his government’s response to the coronavirus outbreak. “They are a small minority and the mouthpieces of foreigners,” Rouhani said in his portrayal of those critics, “who are simply parroting” the enemy’s stance, trying to “profiteer” from the pandemic by “disseminating mistrust” in society.

Iran announced 94 new deaths April 22, raising coronavirus mortalities close to 5,400. Infections stood near 86,000 as signs appeared that the earlier sharp rise in COVID-19 cases was slowly coming under control. From day one, however, Iran’s official account has been challenged not just from abroad, but with an even more fierce, blistering critique at home. City council members, mayors and lawmakers representing the hardest-hit cities such as Qom, Rasht, Mashhad and Tehran have relentlessly expressed skepticism about the government’s version, which they believe is not reflective of the larger number of deaths and cases.

Earlier this week, Health Ministry spokesman Kianoush Jahanpour, who has become a familiar face on Iran’s state TV with daily coronavirus briefings, lashed out at some members of the Reformist-dominated Tehran city council for questioning his statements, advising them to stay out of areas in which they lack specialty. “They do have a history of expressing such opinions about elections as well,” Jahanpour said, referencing the 2009 disputed election in Iran, when the larger Reformist camp alleged widespread vote rigging in favor of hard-line candidate Mahmoud Ahmadinejad.

In his Wednesday Cabinet meeting, Rouhani once again defended his government’s handling of the pandemic but warned also that the fight is far from over. While admitting that Iranian hospitals faced equipment shortages at the outset, Rouhani said the medical community has now accumulated expertise and experience to tackle the outbreak. Coronavirus testing kits — a global challenge to all hard-hit countries — are no longer an issue in Iran, Rouhani added, declaring that his government could even “export them abroad any moment.” The comment came in apparent contrast with a Customs Office report on the importation of a six-ton cargo of testing kits from France the very same day.

In another development, the Iranian army said it had funded a project focused on training sniffer dogs capable of detecting coronavirus infections. Only last week, the Islamic Revolutionary Guard Corps unveiled a device it claimed was capable of identifying infected humans and objects within a 100-meter radius. The announcement, nonetheless, sparked fact-versus-fiction debates on social media, where it was interpreted as mockery of physics, and met a fierce backlash from some Iranian scientists.

Since the second week of April, the Iranian government has been stepping on a fine line in trying to strike a balance between pandemic containment plans and reopening the economy. Social distancing measures have been introduced along with a piecemeal relaxing of lockdowns, which has seen low- and medium-risk businesses resume normal activity.

Nevertheless, for the capital, Tehran, with a population of over 9 million, the new strategy has been deemed a hasty step that could ruin the country's relative success with COVID-19. In his latest message, Alireza Zali, the head of Tehran’s committee combating the coronavirus, raised fears about an emerging pattern in transmissions. New patients seeking treatment in hospitals, he said, are increasingly demonstrating heightened, fast-worsening acute symptoms upon entry; this has triggered a spike of admissions into intensive care units.