Intel: US comes out against emergency COVID-19 IMF loan for Iran

The United States opposes Iran’s request for a $5 billion emergency loan request from the International Monetary Fund (IMF) to help it cope with the coronavirus pandemic, Al-Monitor has learned. 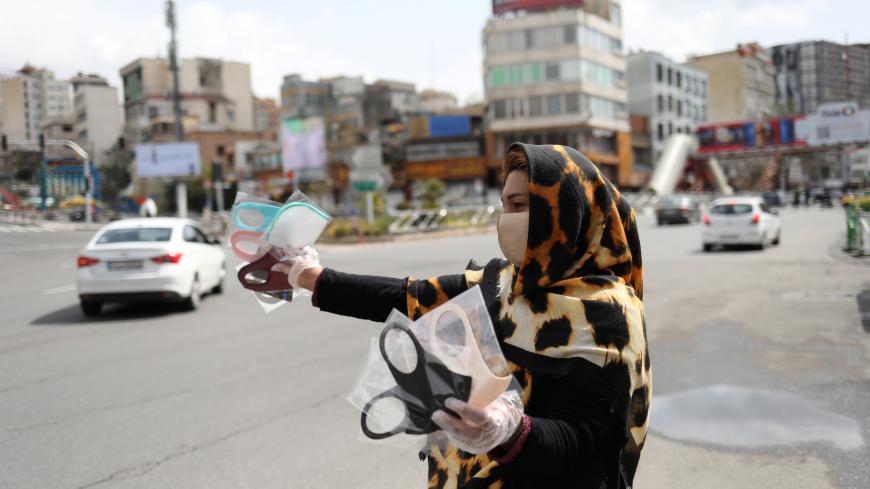 A woman wears a protective face mask and gloves, amid fear of the coronavirus as she sells masks in Tajrish Square in Tehran, Iran, April 2, 2020. - WANA (West Asia News Agency)/Ali Khara via REUTERS

The United States opposes Iran’s request for a $5 billion emergency loan request from the International Monetary Fund (IMF) to help it cope with the coronavirus pandemic, Al-Monitor has learned.

“The world’s leading state sponsor of terrorism is seeking cash to fund its adventurism abroad, not to buy medicine for Iranians,” a State Department spokesperson told Al-Monitor. “The regime’s corrupt officials have a long history of diverting funds allocated for humanitarian goods into their own pockets and to their terrorist proxies. Iranians themselves know this best, which is why many dissidents and former political prisoners have written to the IMF requesting that they deny providing direct financial support to the regime, which would not go to help the Iranian people.”

Why it matters: Iran requested the $5 billion IMF loan last month to help it fight the coronavirus, which has infected nearly 63,000 Iranians and killed more than 3,800 people to date. The secretary of Iran’s Supreme National Security Council, Rear Adm. Ali Shamkhani, accused the United States over the weekend of using its clout within the IMF to stonewall the loan request. The United States has by far the largest number of shares within the IMF, giving it 16.5% of the body’s total votes. Conversely, the European Union has come out in favorite of the loan.

What’s next: Iran sanctions are quickly becoming a presidential campaign issue, with Vice President Joe Biden — the likely Democratic presidential nominee — calling on the Trump administration to expand humanitarian exemptions within the US sanctions regime to help fight COVID-19. His primary opponent, Sen. Bernie Sanders, I-Vt., wants the Trump administration to go even further and lift all financial sanctions on Iran amid the coronavirus pandemic.

Know more: Keep an eye on Al-Monitor tomorrow for an in-depth piece on the IMF loan request and Iran sanctions in the midst of the COVID-19 pandemic from Congressional Correspondent Bryant Harris. In the meantime, Al-Monitor has the story on President Hassan Rouhani’s push to open certain sectors of the economy by Wednesday despite warnings from health officials.