While gradually reopening much of the economy amid lowering coronavirus-related mortalities, the Iranian government has extended a shutdown of religious sites nationwide. 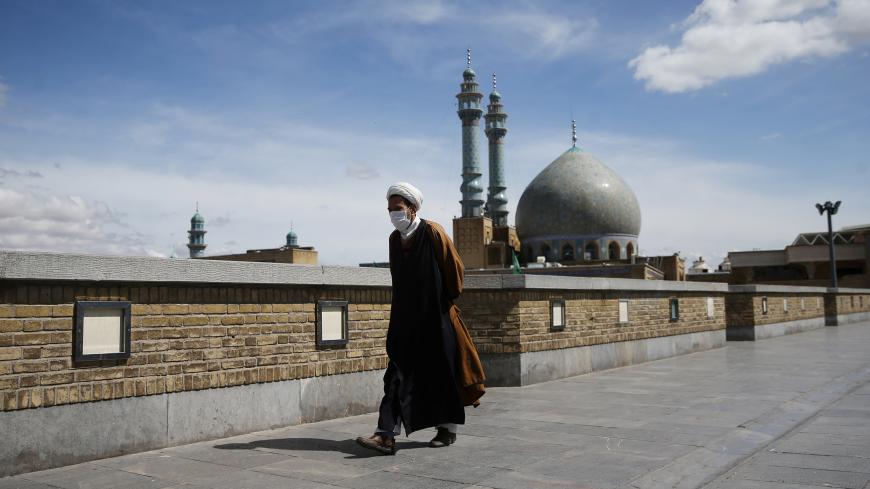 A cleric wearing a protective face mask, following the outbreak of coronavirus disease (COVID-19), walks on the street in Qom, Iran, March 24, 2020. - WANA via REUTERS

The closure of holy sites in Iran has been extended for two more weeks, until May 4, amid fears that religious gatherings may complicate wider coronavirus containment plans in the country. A further extension beyond the announced date, according to Iran’s Health Ministry, will be decided on the basis of updated assessments on the trajectory of the fight against the pandemic.

Earlier this week, much of Iran’s economy went up and running again, largely returning to where it was during the pre-pandemic period. Grand bazaars and commercial complexes were among the latest to resume activity under a series of health protocols.

The decision by the government of moderate President Hassan Rouhani to continue to keep religious sites under a shutdown was made despite calls for reopening from some members of the conservative clergy, including powerful cleric Ayatollah Ahmad Alamolhoda, who leads Friday prayers in the northeastern holy city of Mashhad.

The initial closures in March triggered dogged resistance from crowds of hard-line, angry worshippers who stormed barricaded shrines in Mashhad and in Qom — the epicenter of COVID-19 in Iran. Both cities have large numbers of seminaries. The ban on religious gatherings was at least once more violated in Qom last week, where a group of mourners, few of whom were wearing protective masks, were seen beating chests — the characteristic style of collective mourning in Shiite Islam. Mohammad Reza Ghadir, the head of Qom’s University of Medical Sciences, has now warned that a resurgence is already taking place in the city as a result of “violated lockdowns and disregarded health instructions.”

Iran’s Health Ministry announced 88 new deaths in its latest tally released April 21. The figure marked the continuation of a lowering trend that has seen daily deaths stay under 100 for a week in a row. Daily infections and critical cases have also been declining in the same period. Yet Health Ministry deputy Iraj Harirchi warned that there is no “guarantee the curve will continue to be flattened” as “second and third peaks” could be still looming and that “no country in the world could claim an end to the outbreak.” Elsewhere, government spokesman Ali Rabiee reminded the public that “there is no such thing as a return to normalcy at the moment.” Comments from the two officials bore no signs of the confidence expressed in the early days of the outbreak about an imminent Iranian victory against the disease.

Whether or not such life-saving gear is in surplus or high demand, Iran’s first responders appear to be suffering beyond the levels projected. Scores of them have succumbed to the virus, with hundreds more infected. And even for the lucky ones, the weekslong battle away from family members that has no immediate end in sight has left them worn out and overstrained.

A report published by Reformist paper Arman-e-Melli said that “65% of Iranian medical staff fighting off the coronavirus are facing acute depression.” Iraj Khosronia, the head of the Iranian Association of Internal Medicine Specialists, explained the grim trend by pointing out that health care workers have increasingly found their relentless efforts to have been in vain “when they see patients die right before their eyes.”