Iranian authorities are pointing the finger of blame at one another over the chaotic management of the recent skyrocketing COVID-19 infection rates. 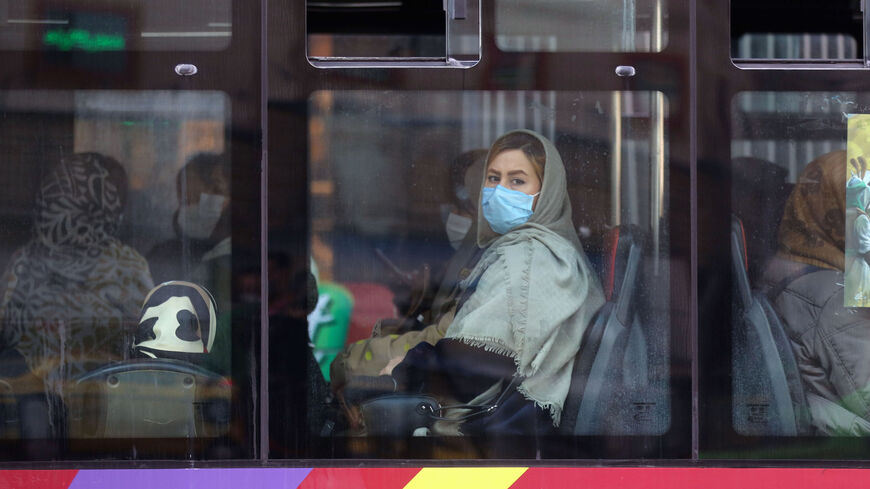 An Iranian woman, wearing a protective mask amid the COVID-19 pandemic, sits in a bus in the capital, Tehran, on Dec. 30, 2020. - ATTA KENARE/AFP via Getty Images

Furious calls are growing louder in Iran against the pandemic mismanagement after the country’s infection rates tripled in a matter of two days. According to official statistics April 8, all provincial capitals and over three-fourths of the country were mapped as red zones. The number of daily cases hit a record new high of 22,586, pushing beyond 2 million the entire population of those infected since the outbreak of the pandemic.

The numbers markedly spiked after the Persian New Year holidays, but this came as no surprise to epidemiologists, whose calls for nationwide restrictions were shrugged by the National Coronavirus Task Force. Now, the question of accountability is largely met with confusion and contradictions.

During a TV interview March 7, Deputy Health Minister Iraj Harirchi compared the speedy infections to flying “missiles,” as he criticized some members of the task force over their dogged refusal to impose lockdowns during the holidays. “I cannot mention names,” he said when pressed by the host. Meetings of the task force are often chaired by President Hassan Rouhani. But Health Minister Saeed Namaki serves as the secretary of the body, which is also inclusive of several other ministers as well as the chief of the armed forces.

The health minister has repeatedly suggested his lack of authority. He has also drawn fury by “begging the public” to follow measures rather than pushing for a strict implementation of prevention policies. “The minister, who is the commander in the frontline against the pandemic, is obviously not listened to [by higher authorities],” wrote Reformist journalist Mostafa Danandeh. “You need to step down, just like a soccer coach whose wings are clipped in arranging the team members. … Mark my words, history will pass judgement on your performance.”

“Which members of the task force let go of the leash of the untamed coronavirus?” asked hard-line paper Kayhan, attacking some authorities for “digging in their heels,” which the paper said is costing Iran nearly 200 lives on a daily basis. Kayhan also attempted to point out contradictory views within the task force by referencing President Rouhani’s rejection of the health minister’s request for a ban on flights to and from the Turkish resort city of Antalya, while trips to holy shrines in neighboring Iraq remain banned.

The moderate paper Jomhouri Eslami reported on the “countrywide explosion of the virus,” and pro-Reform daily Aftab-e-Yazd demanded that those who thrust the country back into the “black days” of the pandemic be held accountable.

Signs of the confusing mismanagement became more obvious after Tehran’s governor declined the Health Ministry’s new call for a two-week lockdown on the capital. Still, a decision was firmly announced for the Grand Bazaar of Tehran to be shut down almost entirely beginning March 10.

The government has also imposed closures on collective Friday prayers in all red areas including provincial capitals. The decision, however, was again marred by exceptions and contradictions. The holy city of Mashhad, despite currently facing alarming rates of infections, announced defiantly that prayers will be held this week. The city’s prayer leader is Ayatollah Ahmad Alamolhoda, an ultraconservative cleric and a fierce critic of the Rouhani government, who has also earned the title of “the effective de facto ruler” of Iran’s second-largest city.