Iranian officials contradict one another on coronavirus projections, state assistance

Iran's health minister says he expects full containment of the outbreak by May 20 despite epidemiologists' predictions of an exponential jump. 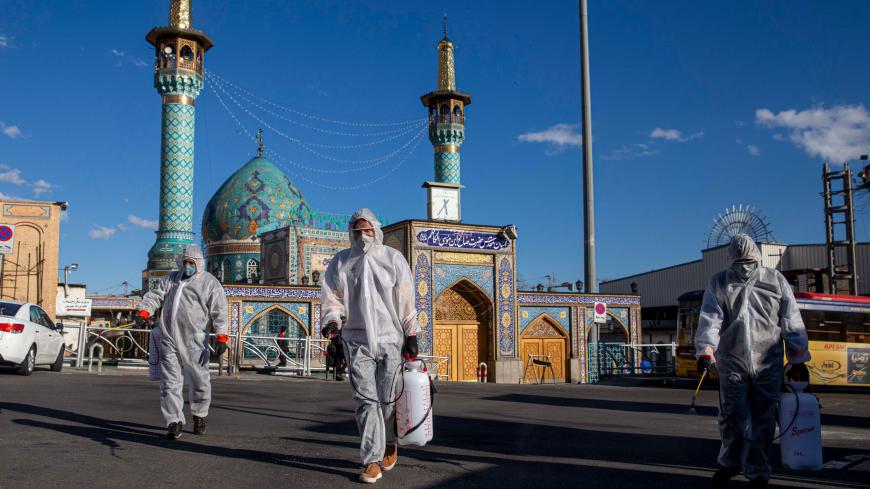 Iranian lawmakers convened Tuesday for the first time since Feb. 19, when the government officially acknowledged the outbreak of the novel coronavirus. In the absence of powerful speaker Ali Larijani, who has contracted the disease, his deputy Masoud Pezeshkian presided over the session, repeatedly rebuking fellow parliamentarians for their failure to maintain the appropriate distance between each other.

Health Minister Saeed Namaki briefed the assembly on the pandemic, saying his ministry had known that the virus would ultimately “plague our country and people.” But he assured the nation that it will be under full control by May 20. Nearly half of the capacity of Iranian hospitals, according to Namaki, remains unused and not a single patient has been turned away so far.

Nonetheless, a deputy health minister told a virtual briefing in Tehran the same day that intensive care beds are now overwhelmed by the outbreak, contradicting President Hassan Rouhani, who has spoken of infrastructural preparedness for thousands more patients in critical condition.

Amid multiple estimates regarding the tremendous impact of the coronavirus pandemic on the Iranian economy, Rouhani has promised loans to help four million Iranian families to the tune of 10 to 20 million Iranian rials ($60 to $120), depending on family size. According to Iranian lawmaker Aziz Akbarian, the figure will do little to help average households.

At least 3,872 Iranians have died from the virus as the community of those infected has now grown beyond 62,000. In a grim estimate, a member of the country’s Committee to Combat Coronavirus put the figure way higher, saying up to half a million Iranians must have contracted the disease so far. Elsewhere, Ali Akbar Haghdoust, the chairman of the Health Ministry’s COVID-19 panel of epidemiologists spoke of a “definite” exponential jump in the coming days.

In his address to the parliament, the Iranian health minister also reminded lawmakers that “today is the moment for an all-out war on the pandemic rather than tracing the origins of the virus.” Namaki appeared to be addressing conspiracy theories that have gained momentum among Iranian hard-liners in recent weeks. In the latest such claim, conservative Ali Shirazi — who represents Iran’s supreme leader in the powerful Quds Force — accused the United States of developing the virus with an aim “to break” its enemies Iran and China.

China has loomed large in the coronavirus debates in Iran. On Twitter, Chinese Ambassador Chang Hua was seen openly clashing with Health Ministry spokesman Kianoush Jahanpour after the latter criticized Beijing for misleading the world about coronavirus mortality rates, calling it a “bitter joke” that China shared with the world.

While the spokesman backtracked on his criticism later, the Chinese envoy was accused by many social media users of "snobbery" when he advised the Iranian official to check the Chinese government's daily briefings to verify his statements. The fierce backlash has prompted the Chinese ambassador to go on a blocking spree, removing many Iranian followers on Twitter.