Iran pleads for medicine as it fights epidemic under sanctions

Iran’s foreign minister has made a public plea for medical supplies and sanctions relief as the country struggles with the coronavirus explosion. 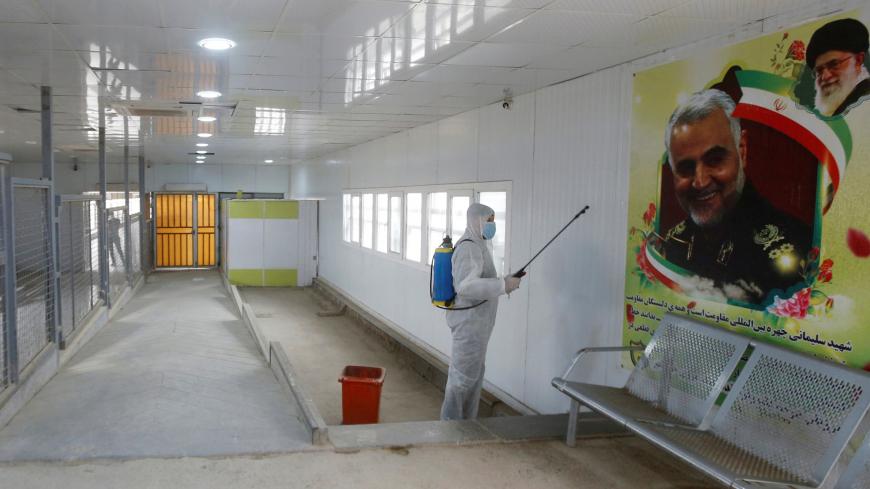 A worker in a protective suit sprays disinfectant inside the gate of the Shalamcha border crossing after Iraq closed the crossing to travelers between Iraq and Iran, Iraq March 8, 2020. - REUTERS/Essam al-Sudani

As Iran struggles to fight the coronavirus outbreak, Foreign Minister Mohammad Javad Zarif has made a public plea for sanctions relief and medical supplies.

Zarif tweeted March 12 that the efforts to fight the virus “are stymied by vast shortages caused by restrictions on our people’s access to medicine/equipment.” He went on, “Viruses don’t discriminate. Nor should humankind.” The tweet was accompanied by a picture listing the country’s medical needs, many of them respiratory-assistance devices and basic medical equipment such as gloves and masks.

Zarif also wrote a letter to UN Secretary General Antonio Guterres calling for the end of US sanctions as Iran battles the disease. In the letter, Zarif called US sanctions “obstacles to the sale of medicine, medical supplies and humanitarian goods.” He said that Iran’s inability to sell oil combined with banking and insurance sanctions have impacted the country’s ability to provide citizens with subsidies on basic goods.

Iran has taken the additional step of asking the International Monetary Fund for money to fight the coronavirus. The head of Iran’s Central Bank, Abdolnaser Hemmati, wrote that the country has asked the IMF for $5 billion. Hemmati said that the IMF’s response will be “good criteria” to judge whether its claims that the body is ready to help counties fight the virus are genuine.

The spread of the coronavirus has shown no signs of slowing down in Iran. The last 24 hours have recorded more than 1,000 new cases, according to Health Ministry spokesman Kianoush Jahanpour, bringing the total confirmed coronavirus cases to 10,078 with 429 deaths. The cases continue to be centered in the provinces of Tehran, Gilan, Qom and Mazandaran, but all of Iran’s 31 provinces have confirmed cases.

Jahanpour also denied reports that the country is considering putting cities under quarantine or closing gas stations amid rumors that gas pump handles were spreading the virus. A number of officials including parliamentarians have called for a quarantine of major centers of the outbreak, but government officials have so far refused to take such drastic measures.

Health Minister Saeed Namaki has announced that rather than seeing people who are symptomatic in hospitals, Iran is now attempting to test individuals for the virus at testing centers. Namaki said that this plan has been implemented in four provinces and will soon be a nationwide program. He added that there are currently 50 such centers and by next week there will be 80. According to Namaki, 3.5 million people have been “evaluated” in the last two days. Of them, 1,200 have been recommended for “monitoring.”