Ethiopia is trying to mobilize Nile Basin countries against Egypt when it comes to dispute over the Renaissance Dam. 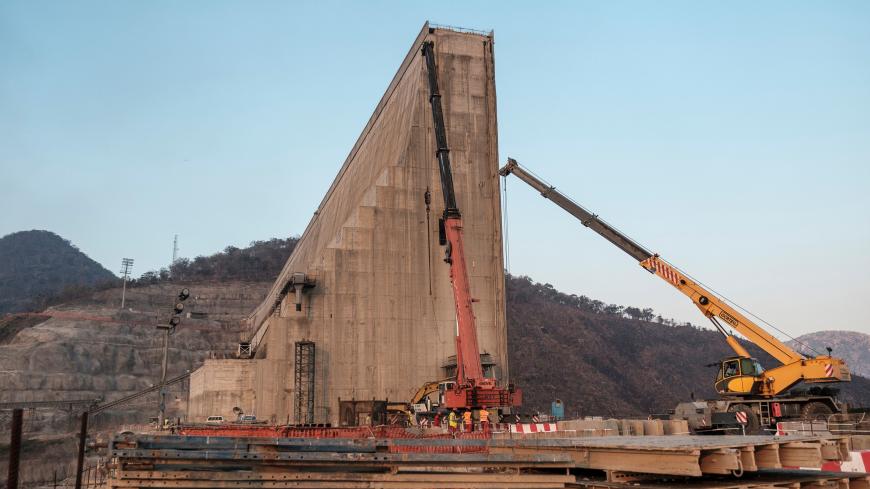 A general view of the construction works at the Grand Ethiopian Renaissance Dam, near Guba, Ethiopia, Dec. 26, 2019. - EDUARDO SOTERAS/AFP via Getty Images

CAIRO — The last round of talks held in Washington in late February on the Grand Ethiopian Renaissance Dam (GERD) faltered to yield a comprehensive agreement on the filling and operation of the dam after Ethiopia withdrew from the negotiations.

A State Department readout of a call between US Secretary of State Mike Pompeo and Ethiopian Prime Minister Abiy Ahmed on April 13 made no reference to the dam dispute. This comes at a time when the Trump administration, along with the World Bank, has been arbitrating discussions among Egypt, Ethiopia and Sudan.

Addis Ababa has since turned to the Nile Basin countries to shore up support in a bid to confront Egypt's international moves to block Ethiopia’s unilateral decision to start filling the dam without any agreement with Egypt and Sudan — thus imposing a policy fait accompli.

Ethiopian Prime Minister Abiy Ahmed announced April 1 the start of the filling of the dam by the next rain season that starts in June. Meanwhile, Ethiopia’s President Sahle-Work Zewde paid visits to Kenya, Uganda and Rwanda, which are member states in the Nile Basin Initiative (NBI), a regional organization tasked with managing cooperation between the Nile Basin countries.

Zewde called for the need of the Nile Basin countries to adhere to just and equitable use of water, and reject any agreements that were not concluded in peaceful means, a jab at the historical water agreements signed during the British colonial era.

After the visits, several official Ethiopian media reports accused Cairo of obstructing the dam talks and trying to impose a colonial-like agreement, while clinging to the 1959 water-sharing agreement, whereby Egypt receives an annual release of 55.5 billion cubic meters of water from the Nile. Sudan and Egypt had signed the agreement to organize water management in the downstream countries.

On April 3, the official Ethiopian News Agency quoted members of the government’s negotiating delegation, who accused Egypt of wanting to “impose its colonial desires,” and calling upon “the Nile Basin countries to ensure that they have a fair and reasonable share of the Nile waters.”

Although Ethiopian officials have been evoking what they called “colonial agreements,” Egypt and Ethiopia share several other historical agreements on the Nile when Ethiopia was not part of any colony, such as the 1902 agreement signed by Emperor of Ethiopia Menelik II. According to this agreement, Ethiopia pledged not to build any facilities on the banks of the Nile without prior consultation with Egypt.

Under a 1993 agreement, Ethiopia also undertook not to construct facilities that would cause significant damage to Egypt’s share of the Nile waters.

Commenting on Ethiopia’s claims that Egypt was seeking to thwart the negotiations over the historical shares of the Nile waters, a technology official in the Egyptian negotiating delegation told Al-Monitor, “Since the signing of the 2015 Declaration of Principles, Egypt has been committed politically, legally and technically to its [the declaration’s] terms and provisions to reach a comprehensive and fair agreement regarding the filling and operation of the GERD.”

The source, who refused to be named, added, “Egypt has attended all tripartite meetings between Egypt, Ethiopia and Sudan, and meetings under the auspices of the United States and the World Bank, which shows Cairo’s seriousness and flexibility amid the intransigent and dodging positions of the Ethiopian side. This led to the faltering of the Washington talks. [Ethiopia] has been trying to evade its obligations and [the terms of the Declaration of Principles] and to start the unilateral filling of the dam disregarding all legal norms.”

“Egypt maintains good relations with the Nile Basin countries as there has been cooperation at the technical and political levels regarding the issue of water management. All attempts to push upstream countries to sway Egypt’s position will be to no avail,” the source said.

Shortly after the agreement was signed, Egypt withdrew from the NBI and froze all cooperation activities with the Nile Basin countries conducted under the initiative’s umbrella.

Mohamed Nasr Eldin Allam, a former Egyptian minister of water resources and irrigation, told Al-Monitor, “Ethiopia’s propaganda, whereby it accuses Egypt of clinging to its historical shares in the Nile water — albeit Egypt’s legitimate right — is an attempt to get out of the terms of the 1997 UNECE Convention on the Protection and Use of Transboundary Watercourses and International Lake and the Helsinki Rules on the Uses of the Waters of International River. These agreements stipulate prior notice and the submission of ecological studies that any [construction] project would not cause any environment, social and economic damage to the dam safety and structure.”

Allam, who was in office when the Cooperative Framework Agreement was signed, added, “Ethiopia resorting to the upstream countries is going to get it nowhere, as Addis Ababa is not linked to these countries in the Equatorial Lakes.”

Geographically, the Blue Nile, one of the main tributaries of the Nile, flows from its source in the Ethiopian Highlands and merges with the White Nile in Sudan, the longer tributary that strems from the Equatorial Lakes all the way to Egypt.

“During the negotiations on the Cooperative Framework Agreement talks, Ethiopia was leading blocks from the Nile upstream countries against Egypt, claiming that Cairo was taking the lion’s share of the Nile water,” Allam noted.

Ethiopia’s efforts to incite upstream countries against Egypt depend on its ability to forge real interests with these countries 10 years after Egypt suspended its membership in the NBI. During this time, Ethiopia did not achieve any tangible progress in the framework of regional cooperation to enhance the utilization of the Nile water in favor of the basin countries.