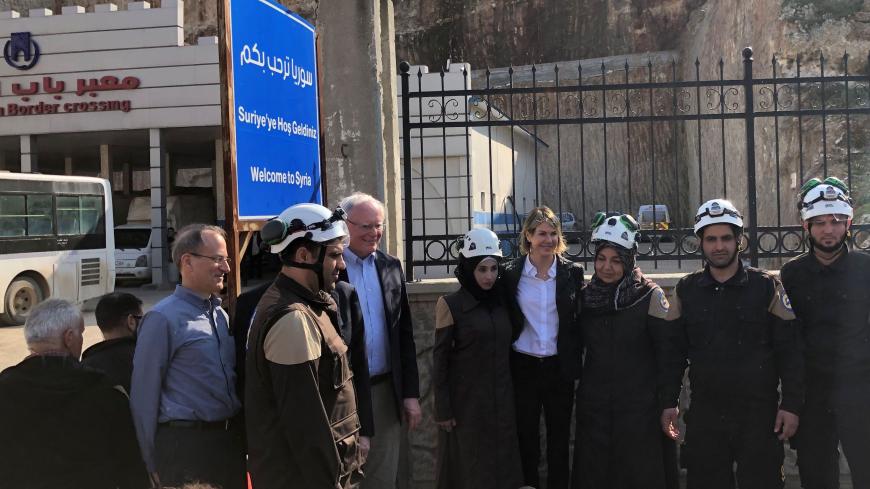 US Ambassador to the United Nations Kelly Craft (4R) and James Jeffrey (6R), the US envoy for Syria, stand with rescue workers at the Syrian commercial crossing point of Bab al-Hawa opposite Turkey's Cilvegozu border gate, in Idlib province, Syria, March 3, 2020. - REUTERS/Tuvan Gumrukcu

The Donald Trump administration will not provide fresh supplies of ammunition to Turkey for its ongoing offensive into Syria’s contested Idlib province, where an airstrike that killed at least 34 Turkish troops last week has sparked a tit-for-tat between the NATO ally and the Bashar al-Assad regime.

The State Department's special representative for Syria, James Jeffrey, told reporters today during a trip to Idlib province that the United States would provide fresh supplies of ammunition to Ankara. But officials later clarified to Al-Monitor that Jeffrey’s comments referred to ongoing US support to Turkey.

“On Ambassador Jeffrey’s comments in Turkey today regarding equipment and assistance for the Turkish government, there is nothing particularly new here as he was talking in the context of what we are already doing,” a State Department official told Al-Monitor. “Turkey is a NATO ally with a largely US-equipped and supplied military. In his comments he acknowledged that we are considering Turkish requests for assistance.”

US Ambassador to the United Nations Kelly Craft also joined the trip over the border into Syria — the first time senior American officials have stepped foot in rebel-held territory taken from the Assad regime.

During the short trip, the Trump administration announced more than $100 million in aid that aligns with the UN’s response plan for the current humanitarian crisis, as more than 950,000 Syrians have been forced to leave their homes amid an uptick in fighting and freezing winter weather.

Overall, the UN is asking for $500 million to ease the burden on overflowing refugee camps, but the world body did not ask the United States to contribute the full amount. The move would mark the first time the Trump administration has let American aid flow into Syria since the White House refused to allow assistance approved by Congress to be appropriated last year.

But even after the suspected Russian airstrike last week, which prompted Turkish retaliation from the air that killed a large number of pro-Assad fighters, Jeffrey’s comments highlight a challenge for the Trump administration in salvaging its relationship with Turkey, though both allies oppose the Syrian regime.

While the United States continues to work with Turkey on missions in Afghanistan, Turkey, and Iraq, the Pentagon still remains furious with Turkey over accepting delivery of the Russian S-400 air defense system in July, which it tested against American-made F-16 jets in December. “Turkey's insistence on moving forward with the S-400 last year will have impacts on Turkish interoperability with the alliance,” a defense official said.

The Department of Defense “will push hard to not provide support, especially if they still intend to go forward with the S-400,” a former senior administration official told Al-Monitor. If Turkey turned off the Russian air defense system, which forced the Pentagon to kick Ankara out of the F-35 program, “that would help in improving the relationship,” the official added.

“Turkey needs to decide who their allies are,” the former official added. “They buy F-35s and the S-400. They ask the US to help them now as their forces are killed by Russia. It doesn't seem like a hard question.” The current crisis has highlighted Turkish President Recep Tayyip Erdogan’s difficulties in weaning Ankara from Western military equipment. Turkey recently requested US-made Patriot batteries to defend its southern border amid the offensive, US officials have said.

Though Jeffrey appeared to offer an olive branch today, former US officials doubted that the Trump administration could successfully convince Erdogan to abandon the S-400, which is set to be switched on in April. Erdogan is set to head to Russia on Thursday in an effort to cool tensions with Russian President Vladimir Putin, who backs Assad with arms and air power.

“Erdogan will only do so if he wants to poke the Russians in the eye (maybe after lots of Turks are killed by Russians in Syria) and/or he gets some comprehensive Patriot/F35 deal with the US,” said Jim Townsend, a former deputy assistant secretary of defense for Europe.

Turkey has also continued a monthslong incursion into areas of northern Syria once liberated from the Islamic State by the US-backed Syrian Democratic Forces, creating another fissure in the relationship.

Amid the current fighting in Idlib, Turkey has said it destroyed more than 100 Syrian tanks and killed more than 2,200 Assad regime forces since the deadly strike on Turkish troops last week. But US officials have questioned whether the figures are accurate. “I also don’t think Russia will let fail regardless of how much pounding the Turks try to deliver,” a US official told Al-Monitor on condition of anonymity.