The United States is reportedly still considering supplying Patriot missile systems to Turkey in what the administration may see as an opportunity to convince Ankara to walk back from the Russian system it acquired last year. 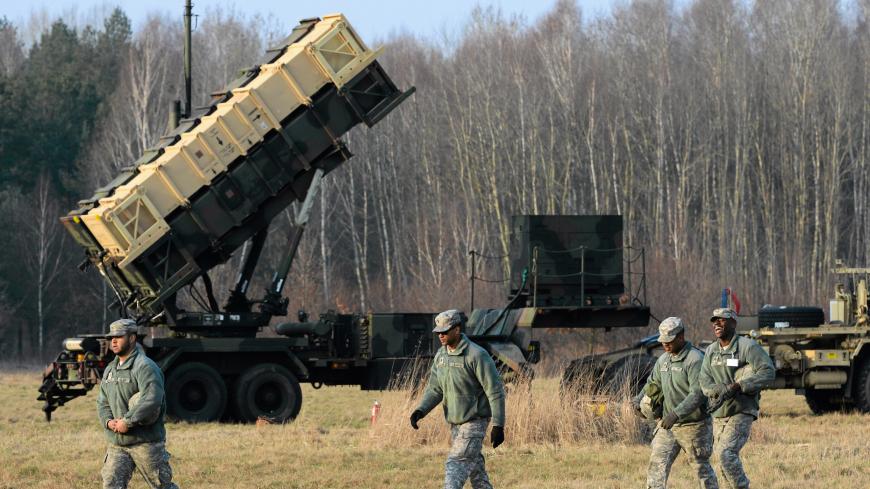 US soldiers walk next to a Patriot missile defense battery during joint exercises at the military grounds in Sochaczew, near Warsaw, March 21, 2015. - REUTERS/Franciszek Mazur/Agencja Gazeta

The Donald Trump administration is talking with Turkey about the delivering the Patriot system, the Pentagon’s top weapons buyer said today, despite killing a sale to Ankara last year. The NATO ally has requested the American-made air defense system amid a standoff with the Syrian regime in the contested Idlib province.

After Turkey took delivery of the Russian-made S-400 air defense system in July, the Trump administration pulled a $3.5 billion offer for competing Patriot batteries. Turkey previously received the defense systems on a loan basis during tensions on its southern border with Syria in 2013 as well as European systems.

A source familiar with the matter told Al-Monitor that US Special Representative for Syria Engagement Jim Jeffrey wants Turkey to request the Patriot system through NATO, as opposed to the United States. Jeffrey traveled to Syria on Tuesday with US envoy to the United Nations Kelly Craft, though it is unclear whether the delegation met with Turkish President Recep Tayyip Erdogan during the trip.

Lord said that despite the US decision to remove Turkey from the F-35 program in the wake of receiving the S-400, which the Pentagon fears could erode the stealth fighter jet’s ability to evade Russian radar systems, other sales programs to the NATO ally haven’t slowed down. Turkey would have to send a formal request to the Pentagon to buy the Patriot system.

But Lord’s comments could indicate that the US administration may still see a narrow window of opportunity for Turkey to walk back from the Russian system, which the alliance has said is not interoperable with NATO-grade weapons. Turkey has pointed to an April date to make the S-400 fully operational, after it tested the defenses in December against F-16s it purchased from the United States.

Speaking last week, US envoy to NATO Kay Bailey Hutchinson renewed a US call on Turkey to drop the Russian system in the midst of the Idlib offensive after an airstrike last week killed at least 34 Turkish troops. “They see what they’re doing now,” Hutchinson said. “And if they are attacking Turkish troops, that should outweigh everything else.”

A State Department official told Al-Monitor on Tuesday that the United States was still considering Turkish requests for assistance in Syria, but it has not approved any new ammunition.

A former senior administration official told Al-Monitor they were concerned that US provisions of ammunition to the Turks in Idlib could hamper the fight against the Islamic State in Syria and could be used against the US-backed Syrian Democratic Forces. In October, Turkey launched an incursion into areas of northern Syria liberated from IS by the Kurdish-dominated group.

The United Nations has called for an immediate cease-fire in Idlib, where renewed fighting has forced more than 950,000 people from their homes.