US coalition transfers another base to Iraqi security forces

The US-led coalition against the Islamic State has announced the transfer of another military base to Iraqi security forces as a temporary precaution against the coronavirus outbreak. 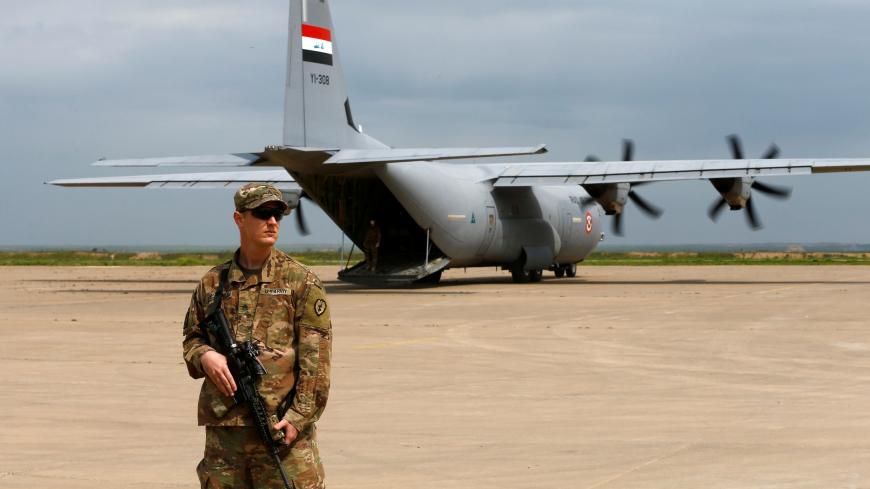 A US soldier is seen during the handover of US-led coalition forces to Iraqi Security Forces at Qayyarah Airfield West south of Mosul, Iraq, March 26, 2020. - REUTERS/Thaier al-Sudani

The US-led coalition assembled to fight the Islamic State has transferred another military base to the Iraqi security forces as part of a planned drawdown in the country, the coalition said Thursday.

In handing over Qayyarah Airfield West in northern Iraq, a statement from the coalition noted success in the fight against the militants.

“The [Iraqi Security Forces] increasingly conducts independent operations in the fight against Daesh and the defense of their homeland,” said Brig. Gen. Vincent Barker, using an alternate term for the Islamic State.

The sprawling base south of Mosul, known as Q-West, was used by US forces during the Iraq War but was captured by the Islamic State when the group swept across northern Iraq in 2014. The airfield, retaken by the Iraqi and coalition forces in 2016, served as a launch pad in the nine-month battle to liberate the city of Mosul and remains a hub for the Iraqi air force.

Troops will depart from Qayyarah in the coming days and continue to “relocate and consolidate” from several other bases throughout 2020, the coalition said. US personnel are expected to withdraw next from the K1 airbase in the oil-rich city of Kirkuk.

“The coalition will operate from fewer locations, but remains committed to supporting our partners in their fight against Daesh,” Barker said.

The United States maintains some 5,200 troops in Iraq as part of the coalition advising and providing training for local forces to defeat the last remnants of the Islamic State.

Earlier this month, US troops withdrew from another base, al-Qaim, on the Iraq-Syria border. The troop repositioning followed a spate of rocket attacks aimed at US forces stationed at Camp Taji and the Basmaya base that killed two Americans and one British service member and were blamed on Iran-backed militias.

Officials have stressed the recent troop movements are unrelated to the attacks and were due in part to the coronavirus pandemic that’s left Iraq with at least 346 confirmed cases of the virus.

Col. Myles Caggins, a spokesman for the US military operation in Iraq, said in a tweet Thursday that hundreds of troops were leaving temporarily as a coronavirus precaution.

“The Coalition is in Iraq at the invitation of the Government of Iraq to defeat Daesh remnants — this is our only purpose. Period,” he wrote. "In fact, we’re transferring bases to [the Iraqi Ministry of Defense] and 100s of training troops are departing temporarily for COVID-19 safety."

The Iraqi military suspended all training in early March in the face of the coronavirus outbreak. Citing a “reduced requirement for training” Iraqi security forces, the United Kingdom paused its training mission and redeployed some of its 400 troops. France followed by withdrawing all 200 service members stationed in the country.