Could baby-faced rival of Erdogan be 'remedy' for Turkey's problems?

Can Ali Babacan, Turkey's former deputy premier, be a beacon of hope for the center-right? 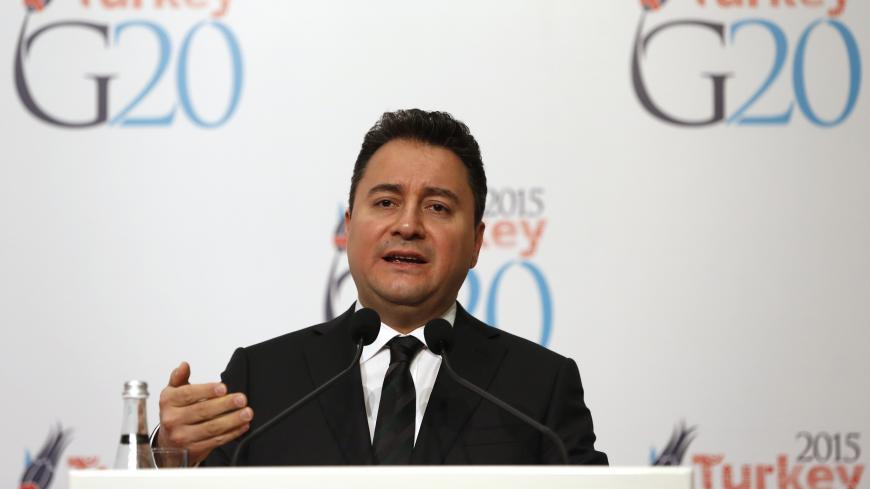 Turkish society is notorious for generating and believing in conspiracy theories — a common pattern in societies riddled with nontransparent governance. Naturally, this tendency nourished itself under President Recep Tayyip Erdogan. Therefore, many Turks believe that the Turkish government deliberately confirmed the country's first coronavirus case March 11 to upstage Ali Babacan, who launched his political party the same day.

Babacan, formerly a close associate of Erdogan, launched his Democracy and Progress Party, or Deva — an acronym that means “remedy” in Turkish — which could be a real challenge to Erdogan, as it might be a remedy for many Turkish problems.

Babacan, Turkey’s former deputy premier, introduced the founders and the program of his long-awaited party at a press conference in Ankara March 12. The press conference was held at the same hotel where Erdogan launched the Justice and Development Party (AKP) in 2001.

Babacan’s party is widely considered to be a real potential challenge to Erdogan's AKP. Yet the Turkish public’s attention turned to the coronavirus the day of the announcement, with thousands of people flooding supermarkets and pharmacies to stock up on emergency supplies. The day was therefore an inconvenient one to launch an ambitious political project.

There is no way to know whether this conspiracy theory is unfounded, but one thing is clear: Deva has entered Turkey’s political arena.

Ali Babacan, the baby-faced chairman of Deva, is not a political novice. He was among the founders of the AKP in 2001, when he was 33 years old.

From 2002 to 2007, Babacan left a strong mark on Turkey’s economic policies. The Turkish economy saw an impressive economic recovery during the first years of AKP rule, with Turkey becoming one of the three fastest-growing economies in the world.

I accompanied him during many of his official trips abroad as the Turkish foreign minister. In one of those visits, Babacan recounted to me how he entered politics. “Gul asked for my father’s consent,” he said mockingly, recalling the friendship between his father and Turkey’s former president.

Babacan comes from a conservative family, the son of a well-known Ankara merchant. He was an exceptionally bright student, graduating from the private TED Ankara College as valedictorian. In 1989, he received a bachelor's degree in industrial engineering from Ankara's prominent Middle East Technical University, where he ranked first among his graduating pool.

​He received his master's in business at Northwestern University in 1992.

His performance as foreign minister was relatively low-profile, since his bailiwick is the economy. From 2009 to 2015, he was the deputy prime minister in charge of the economy. During his term, he was known to have disagreements with Erdogan from time to time.

Ali Babacan has a humble character. He has been careful not to be in the spotlight — a temptation many politicians can't resist. Nonetheless, he shouldn’t be seen as a political novice, having served in key ministerial positions for 13 consecutive years.

His party, meanwhile, could be considered a novice in politics.

Deva is a new and ambitious project in terms of its program pledges and the wide range of profiles of its 90 founders.

Sixteen of the founders are under 30 and do not have any political background, Babacan told independent news platform Medyascope March 11.

Given that two-thirds of the Turkish population is under 30, the element of youth in the party is noteworthy, as is the representation of women: Deva has 27 female founders. The center-right and conservative parties in Turkey are notorious for being male-dominated. Among Deva's founders, alongside Babacan, are 15 disgruntled former AKP lawmakers including three former ministers. The party is a magnet for those wanting to escape Erdogan's yoke.

However, given the profiles of the founders, it would be wrong to consider the party a new version of the AKP, or a safe haven for AKP deserters.

Babacan's statements and the profiles of the founders indicate that the new party will be similar to the center-right Motherland Party (ANAP), led by late President Turgut Ozal. Ozal united the different currents of Turkish politics under the umbrella of his party from 1983 to 1993.

Can Babacan achieve the same success against Erdogan, who will seemingly do everything imaginable for his political survival?

Some may see Babacan’s mild manners as a weakness. He is almost the opposite of what Erdogan represents. But this so-called weakness may prove to be a valuable asset as Turkey’s public suffers from acute polarization.

Reiterating Lord Acton’s dictum in his March 11 interview with Medyascope, Babacan said, “Power corrupts and absolute power corrupts absolutely,” in an apparent reference to Erdogan. He added that Turkey needs a “fresh start.”

Babacan called for reforms to strengthen the rule of law and democracy, which are fatally undermined and battered in today’s Turkey.

“Unfortunately, the political party of which I was a member began to do things very contrary to its founding principles," he said. "There is a powerful need to create a more prosperous and livable Turkey, and this is not possible within the current political order."

Deva’s political program envisages terminating the executive presidency and returning to a parliamentary system. He is outright pro-EU and pro-NATO, in contrast to Erdogan’s controversial foreign policy choices.

Considering its policies, Deva could well become a target of AKP repression, as has been the case for other opposition parties. It may even, ultimately, be put out of business.

Yet one thing is sure for now: With Deva, Turkish political life will be even more turbulent in the foreseeable future.