Ali Babacan resigned from Turkey's ruling Justice and Development Party, unleashing a fresh wave of speculation that he might form a rival center-right party. 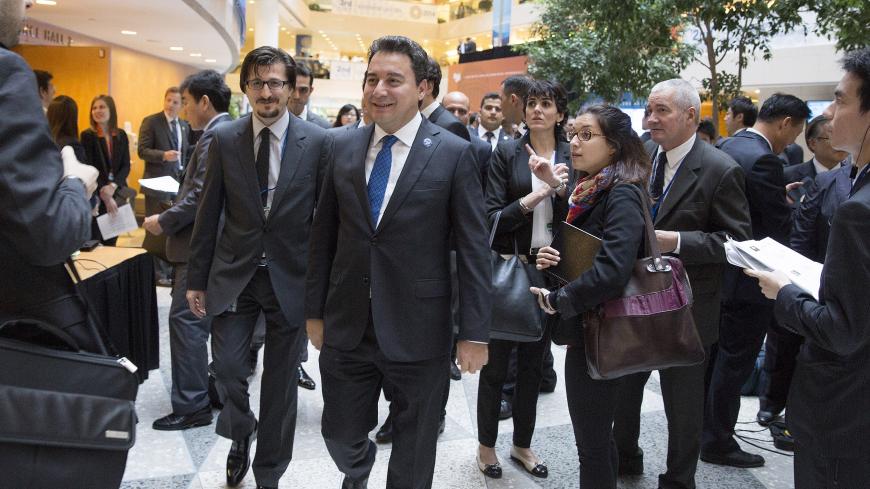 The resignation of Ali Babacan, a respected former economy minister, from Recep Tayyip Erdogan’s ruling Justice and Development Party (AKP) has unleashed a fresh wave of excited speculation about the prospects that he might form and lead a rival center-right party.

In a statement explaining why he quit the party he co-founded in 2001, Babacan cited “deep differences” between his personal principles, values and ideas and those manifested in the AKP's current trajectory. “Given Turkey’s current circumstances,” Babacan said, “Turkey is in need of a brand new vision for the future. Embarking on a new effort for Turkey’s present and future has become inevitable. [Myself] and many of my friends feel a great and historic responsibility toward such an effort.”

Babacan’s long-anticipated defection came only days after Erdogan fired Turkey’s central bank governor, Murat Cetinkaya, likely for disobeying his orders to reduce interest rates. The move was seen as further evidence that the Istanbul municipal rerun has done little to temper the president’s obduracy or prompt him to draw the requisite lessons from the AKP’s bruising defeat.

Babacan and like-minded liberals apparently seized on the result as an opportune moment to start forging their new party. Rumbles of discontent have been rippling through the AKP over Erdogan’s imperious and notoriously rude treatment of fellow party members. This was on full display when Erdogan dismissed the AKP’s putative rival as “an empty sack that will instantly crumple.”

Erdogan’s polarizing rhetoric and erratic course, which has seen the once booming economy weaken, are sources of mounting discomfort, as is a rarely voiced but deeply felt resentment over his inner circle's alleged corruption.

Former Prime Minister Ahmet Davutoglu, who is said to be forming a separate party, has been far more vocal about his disapproval of his former boss.

Yet Babacan, who enjoyed a stellar reputation as economy minister and served briefly at the helm of the Foreign Ministry, is widely viewed as having a better chance than Davutoglu. The former professor is blamed for dragging Turkey into the Syrian quagmire with his ill-fated dreams of reviving Turkey’s Ottoman glory.

Babacan is more interested in reviving the reformist spirit of the AKP’s early days, when it stuck to the International Monetary Fund’s advice, promoted women’s rights and reached out to Armenians and Kurds.

The US-educated 52-year-old said his principles are “human rights, freedoms, advanced democracy and rule of law,” the subtext being that all of these have evaporated in recent years.

He is backed by former President Abdullah Gul, who was the driving force behind the reforms.

The big question is what effect either of these enterprises will have on the AKP.

Babacan is thought to be aiming to pitch a broader ideological tent beyond disgruntled AKP members.

Behlul Ozkan, an associate professor of political science at Istanbul’s Marmara University, cautioned that it's too early to make predictions. “For now, all we know is that he’s resigned. But if he does set up a party, he can claim space in the center right, and Erdogan’s principle strategy was to prevent the formation of any party on the center right,” Ozkan told Al-Monitor.

“For the first time the possibility of a center-right grouping breaking off from the AKP has emerged. We don’t know what share of the vote he is aiming for, but even if he wins 5% this will have a profound impact on Turkish politics and the executive presidential system.”

Ozkan was alluding to growing talk among the opposition and within the AKP alike to switch back to the parliamentary system from the one-man rule Erdogan established for himself.

Rusen Cakir, a veteran commentator, believes Babacan is more likely to seek consensus with the main opposition secular Republican People’s Party (CHP) and the left-wing, Kurd-friendly Peoples’ Democratic Party (HDP) than pursue victory on his own. Their combined forces could, in theory, rob Erdogan and his nationalist partners of their parliamentary majority, and lead to a call for early elections. Under the new “double trigger rule,” which came into effect with Erdogan’s long-coveted executive presidency, parliamentary elections have to be held concurrently with presidential ones. With the economy — his trump card — rapidly unraveling, Erdogan’s own seat might well be at stake.

Ozgur Unluhisarcikli, the director of the German Marshall Fund’s Ankara office, said of Babacan, “His advantages are a proven track record of success in foreign policy as well as the economy and not being disliked by any voter bloc despite 15 years in politics.” He is unmarred by sleaze.

Moreover, Unluhisarcikli observed, “his conciliatory approach is another plus when Turkish society is exhausted by polarization.”

The trouble, though, is that the famously cautious Babacan might have acted too late. Istanbul’s new CHP mayor, Ekrem Imamoglu, “may have already filled part of the void Babacan plans to fill,” Unluhisarcikli said. More critically, perhaps, “so far, he is seen mainly with old male politicians from the AKP. He needs to surround himself with new young faces, including women, otherwise his movement many be perceived as not really new.”