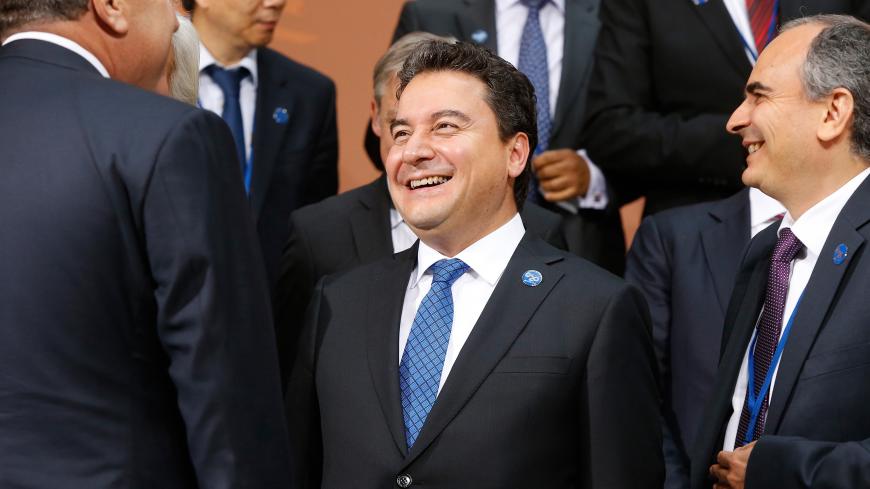 Turkey’s ruling Justice and Development Party (AKP), in power since 2002, has seen a sharp decline in its political fortunes over the past year, with the crisis bruising the country standing out as the prime driver of the downtick. The opposition scored major victories in the local elections earlier this year, and economic grievances proved a major factor swaying the vote. The crisis has also facilitated the long-expected birth of a new party from within the AKP ranks, where many are believed to be silently frustrated with President Recep Tayyip Erdogan’s strongman rule.

Ali Babacan, the AKP’s economy czar until 2015, quit the party last month, rolling up his sleeves to create a new party backed by former President Abdullah Gul. It seems Babacan’s initiative will advance with support from domestic and external economic actors, including Turkey’s leading business organizations.

In-house rifts are known to have hit the AKP a long time ago, but they have remained muffled as few have had the courage to openly speak against Erdogan, wary of the pressure they would face. What happened to Gul ahead of the June 2018 presidential polls is a case in point. The leadership of the main opposition Republican People’s Party (CHP) was widely rumored at the time to be weighing the option of backing Gul as a candidate against Erdogan. The two had fallen out after many years of close collaboration, including in creating the AKP. Gul was deterred from running in a not-so-polite fashion — the then-chief of staff landed in his backyard in a helicopter for an unlikely visit, accompanied by an Erdogan aide.

Though Gul remained on the sidelines at the time, he is now involved in the effort to create a center-right party to challenge the AKP, acting as a mentor to the younger Babacan, who enjoys credibility as the skipper of the economy in the years it flourished.

The government, meanwhile, is struggling to revive the economy. Erdogan has tightened his grip over the central bank to force rate cuts, with public banks under similar pressure to cheapen lending and prop up the Turkish lira. Still, the prospects appear bleak. The drop in the sectoral confidence index in July indicates that economic actors have little confidence in the government’s measures, an advantage for Babacan’s initiative.

A brief reminder of how things came to this point: Turkey’s economic troubles grew into a full-blown crisis in the second half of 2018, but having seen it coming, the government had brought forward the presidential and parliamentary polls by a year, to June 24, 2018. Erdogan managed to muster 52% of the vote, assuming sweeping powers under a new executive presidency system that replaced the country’s parliamentarian regime. Despite his extraordinary powers, however, he failed to avert the crisis.

The dramatic slump of the lira and the ensuing spike in prices rattled the entire nation. Year-on-year inflation shot up to more than 20% before easing a bit in recent months, while food inflation hit the region of 30%, dealing a severe blow to the electorate’s livelihood. The sharp decline in domestic demand caused production to shrink in all sectors, with the number of unemployed Turks growing by 1.1 million to 4.2 million over a year, meaning that roughly 3,000 people joined the ranks of the jobless per day.

Voters responded in kind in the March 31 municipal polls. The CHP won the key mayoral races in 21 major provinces that account for 63% of Turkey’s gross domestic product, including Istanbul, the country’s economic powerhouse, and the capital Ankara. Erdogan refused to stomach the narrow defeat in Istanbul and forced a re-run in June, only to see his candidate routed. Pollsters say the AKP’s popularity remains on the decline. According to Bekir Agirdir, the head of the respected research company Konda, the party’s core electorate — the voters who say they will back the AKP no matter what — has shrunk from 38% to 27% since the local polls. Another polling company, PIAR, found in July that a third of AKP voters believe Turkey needs a new party on the center right.

Erdogan appears alarmed and already on the offensive. He has accused Babacan of “fracturing the ummah” and threatened that “those who commit treason will pay the price.” Despite the threats, however, economic actors and organizations unhappy with the country’s economic management have made contacts with Babacan, albeit very quietly. Babacan himself has remained tight-lipped, barring a July 8 written statement in which he announced his departure from the AKP and stressed that Turkey needed “a brand-new vision for the future.”

The Turkish Industry and Business Association (TUSIAD), which brings together the country’s biggest tycoons who were quite happy with Babacan’s economic management from 2002 to 2014, is reportedly supportive of the new party venture. According to prominent Turkish journalist Fatih Altayli, Babacan has had meetings with TUSIAD leaders, enjoying “great attention and praise,” in addition to contacts with foreign investors and representatives who have encouraged him to forge ahead. No one has denied the report.

Osman Arolat, the chief columnist of Turkey’s top financial daily Dunya, wrote, “Ali Babacan is in the process of drawing up the economy-focused manifesto and platform principles of the prospective party. He aims to put together a team beyond AKP quarters, including businessmen, liberals and even some who are known as leftists, seeking to unite them on a pro-Western political platform.” Arolat cited “an AKP wise man” as his source, noting that Babacan intends to proceed with the preparations out of the public eye.

The Turkish Union of Chambers and Commodity Exchanges (TOBB) is another influential business group, representing big and small entrepreneurs alike. Its longtime chairman, Rifat Hisarciklioglu has been largely supportive of the AKP, both during the party’s foundation and afterward. He has yet to offer any hint on how he views Babacan’s move. In the past, however, he has praised Babacan, crediting him with successfully tackling “chronic problems” such as public debt and inflation. Where the TOBB chairman will choose to stand in the Erdogan-Babacan showdown is a highly curious question, but as the problem of economic management grows, he is expected to eventually pick the side that appears more capable of solutions. His choice is likely to be shared by major TOBB constituents such as the industry chambers of Istanbul, Ankara and the Aegean region.

Wary of Erdogan’s wrath, the representatives of the business community have refrained from openly supporting Babacan thus far, but they are likely to raise their voice as Babacan forges ahead.