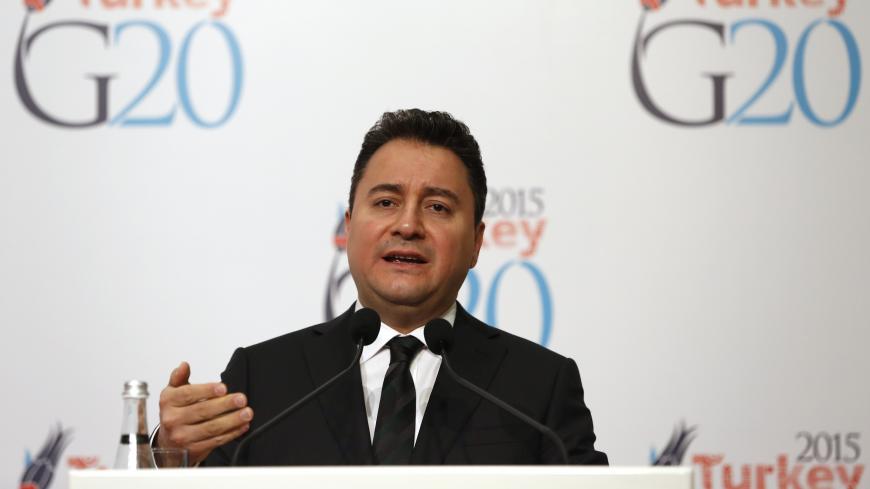 In his long political career, Abdullah Gul, Turkey’s former president and co-founder of the ruling Justice and Development Party (AKP), has been widely perceived — deservedly or not — as a politician averse to taking risks. Beyond any perceptions and opinions, however, the fact today is that Gul has assumed the role of a “guide” in a long-rumored plan to set up a new party that threatens to split the AKP. In the first tangible indication of a breakup, Ali Babacan, the AKP’s former economic czar, quit the party July 8.

In his resignation, Babacan — who served in several AKP governments under the now-defunct parliamentary system, most recently as deputy premier in charge of the economy — said that he had grown “mentally and emotionally estranged” from his party and that Turkey needed “a brand new vision for the future.” In two brief sentences heralding the new party, he said, “It has become inevitable to start a new effort for Turkey’s present and future. Many of my colleagues and I feel a great and historic responsibility toward this effort.”

Sources close to the work on the new party told Al-Monitor that it was Gul’s desire to have Babacan at the forefront of the move. Gul’s role is described as that of an “ağabey” — a Turkish word that means “elder brother,” but also denotes senior and experienced men whose views are taken into account and whose advice is heeded. In modern-day language, Gul’s role could be translated as “mentor” or “guide.”

Gul might have declined a founding leadership position on the grounds of his age — he turns 69 in less than four months — or because he already retired from the presidency in 2014. Nevertheless, by helping as an “elder brother,” he has still taken on an active role. So, given his reputation for shying away from risky political moves, is it fair to assume that the new movement stands a high chance of success?

That Gul is finally intervening in politics is, no doubt, a meaningful sign. But even more telling, perhaps, is the reaction of President Recep Tayyip Erdogan, who is also the chairman of the AKP and had met with Babacan ahead of the June 23 do-over of the mayoral election in Istanbul.

In remarks to journalists on a flight back from Bosnia July 10, Erdogan sounded rather uneasy as he recounted his meeting with Babacan. He said he told Babacan, “You can go your own way, that’s fine. But keep in mind, you don’t have the right to fracture the ummah. That’s what you are doing. You can’t get anywhere by fracturing the ummah.”

Erdogan’s use of the term “ummah,” which means the entirety of the Muslim world, to describe his party and its voter base is a perfect illustration of the extremes that mixing politics with religion has reached in Turkey. By going so far as to equate the AKP with the ummah and, by implication, elevate himself to the status of its leader, Erdogan has a political purpose. He wants to ensure that any looming political development detrimental to the AKP is perceived as anti-Islam in the party’s grassroots. Yet his use of the word “fracturing” reflects a very realistic apprehension over the consequences the AKP could face.

Before any fracturing, however, Babacan’s defection points to a current unraveling in the government ranks. The timing of his resignation — two weeks after the AKP’s historic rout at the Istanbul mayoral polls — is hardly a coincidence. And before this unraveling, there was certainly an in-house rift, dating back many years, when Gul and Babacan became an axis of rising dissent against Erdogan.

Babacan’s resignation did not come out of the blue. Back in July 2014, he made it clear he disapproved of Erdogan’s political culture and governing style in a public speech as deputy premier. “Isolationist policies that shut foreigners out or look abroad for imaginary explanations will pose an extremely high risk to the economy. Turkey today has no other option than being an open economy,” Babacan warned. “Therefore, [we need] an economic and financial structure built on credibility that is in harmony with the world and integrated with the world. … Populism is a common malaise in politics and we must not fall into this trap.”

Five years on, the crisis plaguing Turkey’s economy and relations with the world show that Babacan’s warnings were not misplaced.

Erdogan and Gul led the creation of the AKP in 2001, transforming Turkey’s mainstream political Islamist movement, but the pair was never truly aligned. The differences in their styles and approaches were always palpable. While Erdogan’s policies moved Turkey away from the European Union, Gul backed the EU perspective. He largely refused to uphold Erdogan’s polarizing rhetoric and extreme and oppressive policies, sticking to a moderate, responsible and unifying path. Yet Gul has failed to curb Erdogan’s authoritarian propensities thus far.

The prospective party under Babacan’s leadership and Gul’s guidance is expected to appeal mainly to the conservative middle classes, both urban and provincial, and Anatolian bourgeois who are worried about the course Turkey has taken.

The sources close to Babacan’s work say they wish to see the party take shape before the end of 2019. While the figures leading the effort appear inclined to meticulously conceal the names of those who have joined them until the party is formally established, four former AKP ministers are known to be collaborating with Gul and Babacan: Besir Atalay, Sadullah Ergin, Huseyin Celik and Nihat Ergun, who have held the interior, justice, education and industry/trade portfolios, respectively.

The sources stress they want to “start off with a clean slate” and are therefore careful to collaborate with “good, conscientious and meritorious figures whom the people would not reject — in short, the right actors.” This formulation suggests they are seeking a founding membership with as many fresh names as possible, eager to avoid appearing as an AKP splinter group. The new party will be characterized by the qualities of its cadres rather than a dominant leader.

And where will the party stand on the political spectrum? The work is “still in the process of formulating policy sets and drawing boundaries,” according to the sources. Still, the basic tenets they emphasize point to the political center. “Rule of law, separation of powers, judicial independence, accountability and transparency … policies reconciled with universal values and the EU,” one source said, adding, “Turkey has commitments to the European Court of Human Rights and the Council of Europe. A perspective focusing on the rights of the individual will be one of the most important values of this movement.”

A key question about the new party is whether it could alter the current arithmetic in parliament, where the AKP relies on the Nationalist Movement Party, its partner in the People’s Alliance, to keep an absolute majority. The sources Al-Monitor spoke with said they were not after luring incumbent parliamentarians to set up a parliamentary group, but confirmed contacts with a number of lawmakers who had shown interest in the new movement. To have a parliamentary group, a party must hold at least 20 seats, which allow it to join parliamentary commissions.

Summing up all those parameters, it is already possible to foresee that the party Babacan will create with Gul’s backing stands a good chance of becoming an important partner in a broad-based national consensus government, which is likely to replace the current government in the medium term with the aim of restoring Turkey’s democracy and institutions and reconciling society.