Ali Babacan, who served as foreign minister and economy czar under Turkey’s powerful leader, has formally applied to set up a new political party, hoping his promise for greater economic and civil liberties will appeal to voters weary of Turkey’s "politics of fear." 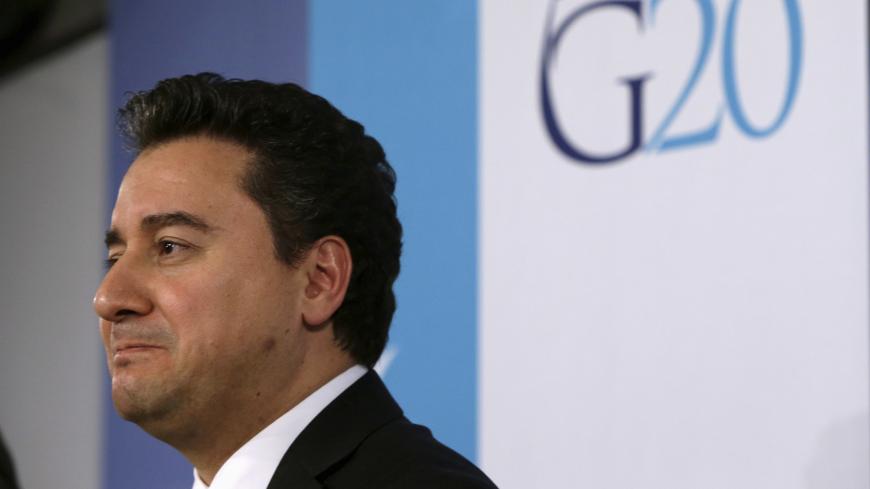 ISTANBUL — Ali Babacan, a former confidant of President Recep Tayyip Erdogan, formally applied on March 9 to launch a political party he said aims to expand freedoms, rebuild trust in institutions and repair the economy, in a rebellion against the ruling party that has dominated Turkey for nearly two decades.

The application for a new party with the Interior Ministry comes after months of delays and is aimed at giving Turkey a “fresh start,” Babacan said in a television interview earlier in the day. It is the second time in three months an erstwhile Erdogan loyalist has established a new political party in a bid to chip away at the government’s base of support.

“Politics are sustained by fear. We want a Turkey in which the level of welfare increases and people can plan for their futures without fear. If we don’t do this, far worse days await Turkey,” Babacan said in an interview on FOX TV’s Turkish affiliate. He said the party would hold a launch ceremony March 11.

Erdogan has concentrated power in his own hands by sidelining parliament, supervising the economy and exercising clout over the judiciary since winning a 2017 referendum that transformed the presidency into an executive post. His consolidation of authority has coincided with a sharp economic slowdown, led to a more assertive foreign policy and ushered in restrictions on speech, civil society and the political opposition, especially the Kurdish movement — a court jailed March 9 the popular Kurdish mayor of the city of Diyarbakir for 9.5 years for “membership in an armed terrorist organization.”

Babacan was a founding member of the AKP, which swept to power in 2002 as a center-right party with roots in political Islam and promises to adhere to Turkey’s secular constitution, introduce free-market reforms and bring the country into the European Union. The 52-year-old is widely credited by foreign investors for overseeing Turkey’s record growth when he ran the government’s economic portfolio.

He acknowledged some of the blame for Turkey’s current malaise resides with him. “I was a member of the government until 2015, and it’s impossible for me not to share responsibility, but since 2015, I’ve had no authority or say,” he told the TV channel.

Erdogan last year said Babacan had rebuffed his offer to continue working together, including as a presidential adviser. "You have no right to break up this ummah," Erdogan said he told him in July 2019, using a religious term for "community." But it was to no avail.

Babacan said he had no intention of confronting his powerful former boss outright and that the party’s focus would be on issues, not personalities. “It’s true we will be rivals, but we see all of the existing parties as rivals. … We are starting a mainstream political movement that is right in the political center.”

News sites posted what they said was a leaked list of the founding members of the new party, called the Demokrasi ve Atılım Partisi, or Democracy and Progress Party (DEVA), which translates as “antidote” or “cure.” Babacan would not confirm the new name but told FOX that 30% of the founding list consists of women and two-thirds of the founders were new to politics.

A handful of ex-Cabinet members and at least one current member of parliament, Mustafa Yeneroglu, who quit the AKP last year, are on the list. Metin Gurcan, a former military officer and Al-Monitor columnist, said on Twitter he was a founding member.

Prominent politicians close to former President Abdullah Gul were said to be involved in planning the new party but did not appear on the list, and some media outlets attributed this to a disagreement over strategy on how to build popular support. Gul gave his blessing to Babacan’s efforts to form a new party, but members of his circle may have gotten cold feet about being at the vanguard of a small party at a time when they believe a “grand coalition” with the rest of the opposition is the only viable challenge to Erdogan’s dominance, according to sources familiar with the matter.

Former Prime Minister Ahmet Davutoglu may have served as a cautionary tale. He established the Future Party in December 2019, and the repercussions were swift: The administration of a private university he helped found was transferred to a state school and the educational foundation he set up was seized by the government.

A poll by Polimetre released in February reportedly showed Davutoglu and Babacan’s new parties securing about 7% of voter support. That’s below the 10% national vote threshold required to enter parliament, but it would still be a blow to the AKP, whose flagging support stood at 30% in the poll. Already, Erdogan relies on an ultranationalist party for a parliamentary majority. He faces re-election in 2023 when he needs a simple majority.

“The executive presidency was established to encourage a two-party system, but instead it has encouraged the formation of new parties, where electoral alliances made up of numerous parties will empower those with just 5% of the vote,” said political scientist Burak Bilgehan Ozpek.

“Conservatives are not fully represented by Erdogan, who has confined his party with nationalism and exclusivity. His departure from a free-market Turkish economy and his move toward Russia in foreign policy … also don’t resonate with many conservative voters, and these new parties aim to appeal to them,” he told Al-Monitor.

Babacan’s focus on rights and the rule of law may yet appeal to a broader set of voters. Half of Turks are unhappy with the state of their democracy, according to a poll by the Pew Research Center released in late February. Turkey exhibited the biggest change since 2015 among the 34 countries that were surveyed about freedom of expression, with 65% saying it is important, compared with 43% in 2015.