Intel: Suicide bombing strikes near US Embassy in Tunisia

Two suicide bombers on a motorcycle blow themselves up near the US Embassy in Tunis, killing a police officer. 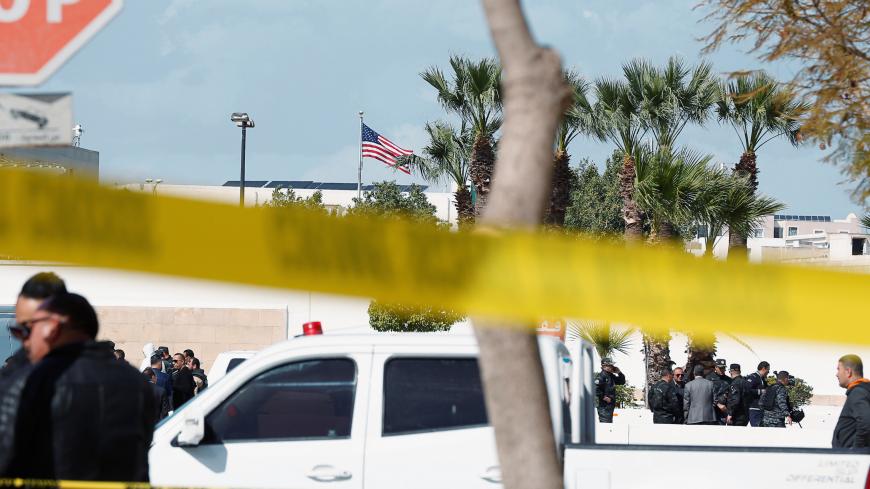 Police officers are seen at the site of a suicide attack near the US Embassy in Tunis, Tunisia, March 6, 2020. - REUTERS/Zoubeir Souissi

A pair of suicide bombers blew themselves up near the heavily fortified US Embassy in Tunis today, killing one police lieutenant. Four others and a civilian woman were wounded in the attack. The men approached the embassy in Tunis’ posh Berges du Lac II district at around 11 a.m. local time and detonated explosives, the Interior Ministry said in a statement. Witnesses said the men were on a motorcycle.

No group has claimed responsibility. Tunisia has been targeted by al-Qaeda and Islamic State-linked terrorists since the country’s 2011 Jasmine Revolution that ushered in what most agree is the most successful — albeit imperfect — democracy in the string of Arab Spring uprisings.

The US Embassy was attacked in 2012 together with a nearby American school by a mob. Four people were killed by security forces in that attack.

Successful counterterrorism operations and surveillance with help from the United States has significantly reduced the scale of such attacks, which have killed dozens, including foreign tourists, at their peak.

US Assistant Secretary of State for Political Military Affairs R. Clarke Cooper was in Tunis on Thursday leading a delegation of defense industry executives. He briefed the media about his visit today in Washington, briefly discussing today's bombing.

Why it matters: Initial reports indicated that the attackers had recently left prison, where they had served time for joining a terrorist group, according to Tunisia’s Mosaiqe FM news outlet. Both were banned from traveling abroad.

Tunisia is frequently cited as the country to have the greatest number of Islamic State fighters per capita. “The attack raises questions about issues related to rehabilitation [and] integration of individuals after they are released from prison,” tweeted Aaron Y. Zelin, one of the foremost experts on jihadism and the author of the freshly published “Tunisia’s Missionaries of Jihad.”

An unknown number of Islamic State and other jihadis have made their way back to Tunisia and the country has no formal program to disengage them from violence.

Zelin speculated that the attack may have been linked to the fourth anniversary of the attempted Islamic State takeover of Ben Guerdane on the Libyan border.

The attack came as the newly approved Cabinet of Tunisia’s prime minister, Elyes Fakhfakh, convened for the first time.

Tourism, one of Tunisia’s biggest sources of income, is already feeling the effects of the global coronavirus scare. The Health Ministry said Wednesday that 996 people were in medical home quarantine under suspicion of infection after confirming Tunisia’s first case of COVID-19, a Tunisian man who had visited Italy.

What’s next: Tunisia’s new president, Kais Said, has vowed to take a tough stand against terrorism.

But policing won’t be enough. The new government needs to prove that it can tackle high youth unemployment, endemic corruption and social injustice that drove millions of Tunisians to cast their ballots against the ruling elite, and thousands of others into the arms of jihadis.

The challenge is balancing their demands with the kinds of unpopular reforms on which the International Monetary Fund has made its continued support contingent. The government is expected to invite the IMF this month for a sixth review of its loan program struck in 2016 to the tune of $2.8 billion.