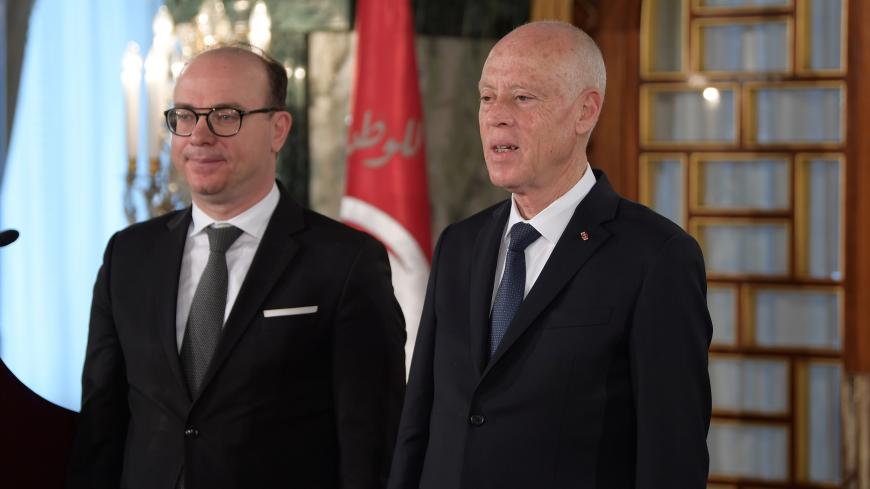 Lawmakers voted 129-77 in favor of the French-educated former finance minister. He was tasked with forming the new government by Tunisia’s enigmatic and doggedly independent new president, Kais Saied, after Habib Jemli — the nominee of the parliament’s largest party, the conservative Ennahda — failed to secure the requisite number of votes in a previous round.

More of the same? Fakhfakh scraped through after much wheeling and dealing with Ennahda leader Rachid Ghannouchi at center stage. The parliament speaker initially rejected Fakhfakh’s list over its exclusion of his one-time nemesis, media magnate Nabil Karaoui’s Kalb Tounes. But Ghannouchi made a last-minute U-turn in order to avert a fresh round of parliamentary elections that would likely see his party lose further support.

Paradoxically, it’s just this sort of backroom dealing that millions of voters fed up with endemic corruption and rising joblessness rejected when they ushered in dozens of independents in parliamentary elections in September, giving rise to a hung chamber.

Whither reforms: Nine years of democratic rule in the wake of Tunisia’s Jasmine Revolution has failed to improve standards of living. Reforms by the International Monetary Fund (IMF) seen as vital to turning around the highly centralized economy have made life much harder, which is why former Prime Minister Youssef Chahed, who advocated for them, received a huge drubbing in the polls.

Yet Fakhfakh is widely expected to stick with the IMF, and Chahed’s Tahya Tounes is one of four blocs that backed his government. “We know Fakhfakh is supportive of international assistance to Tunisia (this includes helping to combat groups linked to Islamic State and al-Qaeda ), so I think he’ll almost certainly continue the IMF program,” Louise Keeler, an advocacy associate at the Program on Middle East Democracy, told Al-Monitor. “There don’t seem to be any viable alternatives, [and] no one has any other solutions they’re willing to stake their reputations on,” she added. Then again, as Sharan Grewal, a North Africa expert at the College of William and Mary observed in a tweet, “As a prelude to the internal divisions this future Fakhfakh government will face, there is already disagreement about whether to allow the privatization of state-owned enterprises.”

Libyan perils: Another big challenge is the conflict in neighboring Libya. Tunisia faces pressure from Turkey and Qatar to weigh in on the side of the Tripoli-based Government of National Accord led by the Muslim Brotherhood friendly Fayez al-Sarraj. Saied has managed to hold the fort so far, rebuffing, among others, Turkish President Recep Tayyip Erdogan’s demands to let Turkey use Tunisia as a base to mount operations against Serraj’s rival, eastern Libyan warlord Khalifa Hifter. The new foreign minister, Noureddine Erray, a former ambassador to Oman, may prove an asset in this regard, predicts political analyst Youssef Cherif. “He seems to be outside of the political clans and factions existing in Tunisia, and therefore he can work with all sides,” Cherif told Al-Monitor.

His skills will be severely tested in the UN Security Council where Tunisia currently holds a seat. “We are in February, and there was already a challenge posed by [President Donald] Trump’s deal of the century. A similar event will occur regularly involving Tunisia’s Maghrebi, Western and Gulf partners and allies, which would oblige Tunisia to take sides,” Cherif noted.