The Kurdish-led autonomous administration declares a two-week curfew in an effort to keep the coronavirus out of northeast Syria; Turkey cuts off water supply to Hasakah. 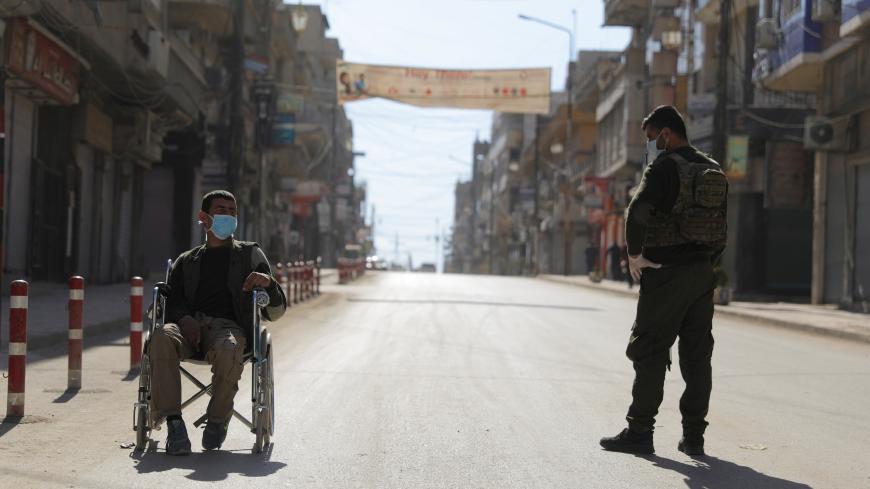 A member of the Kurdish-led Asayish security organization stands near a man in a wheelchair along an empty street, as restrictions are imposed as measure to prevent the spread of the coronavirus disease (COVID-19) in Qamishli, Syria, March 23, 2020. - REUTERS/Rodi Said

The Kurdish-led autonomous administration in northeast Syria announced a lockdown in the broad swath of territory under its control today, just hours after the Syrian government confirmed its first case of the coronavirus.

The autonomous administration has declared a two-week curfew. It said in a statement this could be extended “in case of necessity and the public interest.” The administration said no cases of COVID-19 had been detected in the northeast so far. The area lying east of the Euphrates bordering Turkey to the north and Iraq to the east is home to between 4 million to 5 million people, among them hundreds of thousands of displaced civilians and Islamic State prisoners.

The real number of coronavirus cases in Syria is widely believed to far higher because of its proximity to Iran, which is among the worst affected countries worldwide. The Kurdish-led administration has sealed all its borders save for humanitarian and coalition deliveries and set up additional checkpoints to monitor people’s movements.

Mazlum Kobane, the commander in chief of the US-backed Syrian Democratic Forces (SDF), which provides security for the area, appealed in a video posted on his Twitter account for people to abide by the new rules and called medical staff “our new leaders.”

“We must adopt these decisions and unite in implementing them, and because our capabilities are few, we must take the necessary preventive measures that are important to protects ourselves, our families, and our friends,” the militia leader, who is also known as Mazloum Abdi, said.

Videos posted by the Hawar News agency showed rows of shuttered shops and empty roads in the SDF-controlled zone today.

“There is 100% compliance with the curfew,” said a Kobane aide, speaking not for attribution.

The co-chair of the administration’s health authority, Raperin Hassan, told Al-Monitor in a telephone interview, “Our means are truly very limited. We have only two normal size hospitals with 200 beds each and they aren’t fully in service, seven ventilators, and no [COVID-19] testing kits. We urgently need help.”

Hassan's colleagues had reached out to the World Health Organization. “They haven’t been cooperative and we don’t know why,” she said. “They told us they would send us kits for each suspected case we report.”

She said the administration had also contacted the US-led coalition and the central government in Damascus for assistance. “We haven’t heard back from any of them. We are basically on our own in this,” she said.

The coalition did not respond to Al-Monitor’s request for comment.

The UN and relief agencies have aired worries that the pandemic could be particularly devastating in Syria, where a decade of war has wrecked infrastructure, including hospitals, which are frequently targeted by regime and Russian warplanes in Sunni rebel-held areas, most notably the northwestern province of Idlib.

The central government in Damascus placed a ban on public transportation Sunday after a 20-year-old woman was identified as a carrier of COVID-19. Schools, parks and restaurants have been shuttered, moves that were mimicked by the Kurdish-led administration in the northeast. The autonomous administration has not, however, announced a prisoner amnesty to relieve congestion nor has it halted conscription. Damascus did both and has taken the additional measure of shutting down bakeries as well, Reuters reported.

Fabrice Balanche, an associate professor at France’s Lyon II University with deep knowledge of Syria, said the regime’s claims that its hospitals are equipped to deal with the coronavirus “are all false.” Balanche told Al-Monitor in emailed comments, “Moreover, it’s impossible to quarantine people as it's been done in Europe or in China. People have to queue for bread, for gas, and other products. Hence, people cannot be distanced from each other.”

Balanche added that while the Kurdish run region had taken preventive measures following the example of the Kurdish Regional Government in Iraq, where a curfew has been in place since March 12,  it will be difficult to sustain. “The pauperization of the population forces people to work,” he noted.

Matters have been made worse by Turkey’s cutting off of water yet again for the Alok pumping station in Ras al-Ain, one of two border towns it seized from the SDF in October. Turkey has repeatedly halted the flow of water to SDF-controlled Hasakah, which is home to over 400,000 people, including tens of thousands of internally displaced persons and the notorious al-Hol camp where jihadi women and children are being held.

Sozdar Ahmed, the co-chair of the water authority in Hasakah, told Hawar News on Sunday, “Since yesterday, the Turkish occupation and its mercenaries cut off water to the people of the city of Hasakah and its environs. It is assumed that the Russian state was the guarantor of supplying the city with water, but they did not play their role well.”

Ahmed was referring to Russia’s role in mediating between Turkey and the SDF over Alok.

Turkey is demanding that the SDF provide electricity to areas under its occupation and is using water as a bargaining chip.

A spokesperson for the United Nations’ Office for the Coordination of Humanitarian Affairs confirmed the water had been cut. Danielle Moylan told Al-Monitor in emailed comments, “We understand that the water supply from Alok station — a source of clean water for nearly half a million people in north east Syria — has again been interrupted. The UN and humanitarian partners are advocating to parties to ensure that this critically important water source flows again to ensure the health and wellbeing of families living in the area.”

Hassan, the health co-chair, said an abiding worry was the likely impact of the water cuts, particularly on al-Hol. “A lot of the people there are living in poor sanitary conditions, making them even more vulnerable than most.” The other concern is the potential for violence in the camp. “It’s a really bad situation,” said Hassan.