SDF calls for humanitarian truce in Syria amid coronavirus crisis

Following the lead of UN Secretary-General Antonio Guterres, the Kurdish-led Syrian Democratic Forces call for a cease-fire in order for all warring parties to combat COVID-19 instead. 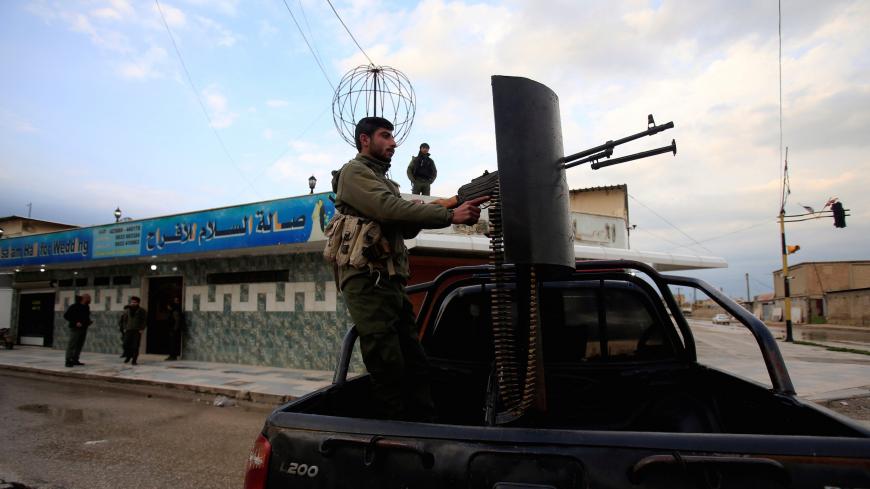 A fighter of Syrian Democratic Forces (SDF) stands on the back of a pick-up truck, with a weapon installed on it, in Qamishli, Syria March 30, 2019. - REUTERS/Ali Hashisho

The Syrian Democratic Forces (SDF), which partnered with the US-led coalition in the fight against the Islamic State, has called for a humanitarian truce and committed to suspending most military operations in northeast Syria so that warring parties can deal with the coronavirus.

“The Syrian Democratic Forces calls on all parties of the Syrian conflict to refrain from any military initiatives or actions,” the SDF said in a statement late today.

“We hope that this humanitarian truce will help to open the door for dialogue and political solution and to put an end to the war in the world and Syria,” the US-backed group said, while adding that its members would defend themselves in the event of an attack.

On Monday, UN Secretary-General Antonio Guterres called for an immediate global cease-fire “to focus together on the true fight of our lives” and allow humanitarians to reach populations most vulnerable to COVID-19.

The SDF announcement came a day after the Kurdish-led group marked the one-year anniversary of its territorial defeat of the Islamic State in the group’s final stronghold of Baghouz in March. In the time since, the SDF has been stretched thin, fending off attacks from Islamic States sleeper cells and Turkish forces.

In October, US President Donald Trump announced a sudden withdrawal of American troops from Syria, opening the door for Turkey to launch a long-planned military operation south of its border.

The White House decision was widely viewed as an abandonment of the SDF, elements of which Ankara views as terrorists because of their ties to an insurgent group inside Turkey.

The Turkish military offensive displaced more than 200,000 Syrians, many of whom are now living in crowded camps and are especially vulnerable to a coronavirus outbreak, the health authority in the Kurdish-led autonomous administration said today.

Of the 16 hospitals in northeast Syria, only one is fully functioning, according to the International Rescue Committee. Just two doctors are trained to use the 11 adult ventilators available to the hospitals.

The co-chair of the administration’s health authority, Raperin Hassan, told Al-Monitor on Monday her government had received little support from the World Health Organization. They had contacted the US-led coalition and the central government in Damascus for assistance, but hadn’t heard back.

In an attempt to prevent the coronavirus from reaching northeast Syria, the local authorities announced the closure of schools and the cancellation of public events, and recently imposed an indefinite curfew on the region.

In a video posted to Twitter on Monday, Gen. Mazlum Kobane, the commander in chief of the SDF, urged residents to obey the new regulations and be “vigilant, safe and secure.”