Seeking to curb the rapidly spreading novel coronavirus, Saudi Arabia has temporarily suspended tourism to its holy sites to the detriment of Egypt's travel industry as the pilgrimage season approaches. 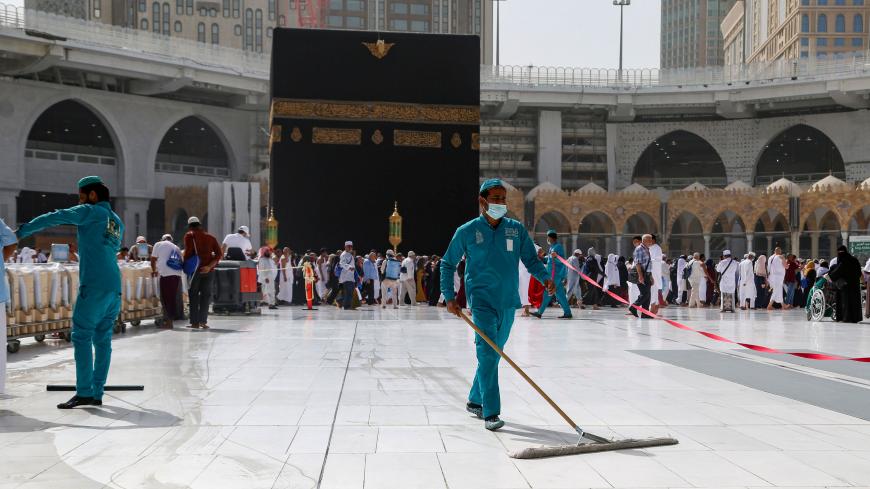 Cleaners wear protective face masks following the outbreak of the coronavirus as they clean at the Kaaba in the Grand Mosque in the holy city of Mecca, Saudi Arabia, March 3, 2020. - REUTERS/Ganoo Essa

CAIRO — The spread of the novel coronavirus and the growing number of confirmed cases across the globe caused the Saudi government March 4 to expand its recently imposed tourism restrictions to include religious travel by citizens within the kingdom. The decision will disrupt umrah pilgrimages, and some Muslims fear the measures will still be in place during the five-day holy hajj pilgrimages that are to begin in late July.

The kingdom had reported five confirmed cases of the coronavirus by March 5, the first one detected March 2 in a citizen who had recently returned from Iran.

Iran's Health Ministry, as of March 6, reported more than 4,700 people had tested positive and 124 had died.

The Saudi Foreign Affairs Ministry initially announced Feb. 26 it was temporarily suspending entry to Saudi Arabia for umrah pilgrimages to Mecca and visits to Al-Masjid an-Nabawi Mosque in Medina. The measures included suspending entry visas for tourists coming from countries where the coronavirus has become a threat, in addition to suspending the use of most national IDs by Saudis and members of Gulf Cooperation Council (GCC) states to enter Saudi Arabia. It also barred entry to some travelers who had obtained entry visas only recently.

Saudi state media reported March 5 that Al-Masjid an-Nabawi and Al-Haram Mosque in Mecca reopened after they were disinfected, but whether tourists would be admitted was uncertain.

In Egypt, the controversial Saudi restrictions have already affected the Ministry of Tourism and Antiquities, thousands of citizens and hundreds of travel agencies. “The ministry is discussing the decision in all its aspects to appraise its impact on Egypt and Egyptians," ministry spokesperson Rana Gawhar told Al-Monitor.

“The ministry is not against any countries making decisions they deem convenient to themselves and their people. Yet such decisions require careful examination by all parties since they touch on other governments and peoples,” Gawhar added.

Egypt reported its third case of the virus in-country Friday and said 12 workers still on a Nile cruise ship had tested positive.

In a Feb. 28 statement, the ministry wrote that it is coordinating with Egypt Air, Saudia airline, private airlines, the Saudi Ministry of Hajj and Umrah, the Egyptian Tourism Federation and the Egyptian Chamber of Tour Operators and Travel Agents. This move seeks to prevent Egyptian citizens from incurring financial losses as a result of suspended pilgrimages.

Egyptian Minister of Endowments Mohamed Mokhtar Gomaa said in a press statement Feb. 27 that he supports the Saudi decision because "preventing harm is better than bringing benefits.”

“The legitimate [right] to preserve lives and ward off any imminent or potential harm justifies the Saudi decision. This is in light of the Saudi Foreign Ministry’s statement that underlines that it is a temporary precautionary measure designed to help curb the coronavirus' spread," the statement said. It continued, “The decision will be subject to continuous assessment, particularly since it is known to everyone that the virus is more prone to spread in crowded areas, as World Health Organization reports affirmed."

Mohamed Fayed, who owns a Cairo-based travel agency, said the travel restrictions “will cause those working in the Egyptian and Saudi tourism sector huge losses.” He told Al-Monitor, "Neither the Saudi nor Egyptian government will compensate for the companies’ losses.”

Speaking to Al-Monitor on condition of anonymity, a source at the Egyptian Chamber of Tourism said that three days prior before the Saudi decision, 4,000 umrah visas were issued for pilgrims to perform umrah in the month of Rajab, which started Feb. 25 on the Gregorian calendar.

The source added, "In addition to the 4,000 visas that were canceled, there were more than 200,000 umrah visa applications submitted in Egypt for pilgrims to perform umrah after nearly seven weeks, namely during Ramadan," which begins in late April this year.

The source emphasized that tourism companies alone will bear the cost of unused visas, bus tickets and flight passes, as well as hotel cancellation fees and other travel-related costs. Such a catastrophe could cause some agencies to go bankrupt.

Mohammad Mahmoud Fathi, head of the Virtue Party, a mainly Salafist political party in Egypt, said the decision is “a crime that should not be tolerated.” Fathi is a fugitive who has resided in Turkey, Riyadh's nemesis, since the ouster of Egyptian President Mohammed Morsi in 2013. “It's not up to the Saudi government or any other government to identify who should or should not visit the Muslim holy shrines, particularly since they are the property of the whole Muslim world.”

Speaking to Al-Monitor via the internet, he indicated, “I don’t know what should be done to get [Saudi Arabia] to back down from the decision, regardless of its duration. Such decisions show that the Saudi government believes it controls what all Muslims own.”