As Saudi authorities denied Umrah visas to more than 50,000 Egyptians, Egypt’s Ministry of Tourism says the crisis with Saudi Arabia is being solved. 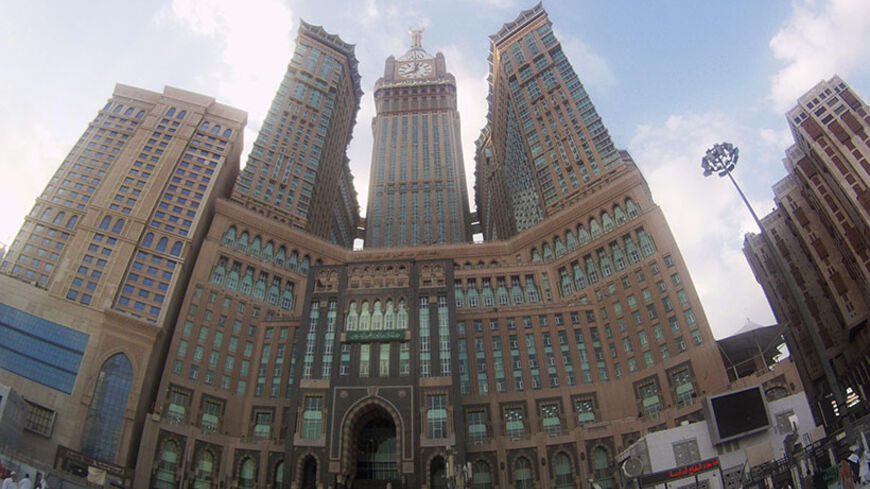 Muslims visit and walk in front of the Mecca Clock Tower after they finish their Umrah pilgrimage, Jan. 14, 2014. - REUTERS/Amr Abdallah Dalsh

The Saudi authorities’ denial of visas for Umrah — the pilgrimage to Mecca that can take place throughout the year — to more than 50,000 Egyptians this year made the headlines in Egypt over the past two weeks.

The Saudi Ministry of Hajj has stopped the online application procedure of Umrah visas for Egyptians without giving prior notice, causing a crisis between travel agencies and thousands of Umrah pilgrims on the one hand, and between the travel agencies and the government on the other. The government was asked to take a stance since this crisis has been ongoing for two consecutive years: 75,000 Egyptians were unable to perform Umrah pilgrimage last year.

According to the estimation of the economic committee of the Egyptian Chamber of Tourism Establishments (CTE), “Travel agencies' losses amounted to 150 million Egyptian pounds ($20.9 million) due to the crisis.”

Although the Egyptian government announced that the crisis was about to be solved following the visit of Egypt’s Minister of Tourism Hisham Zazou to Saudi Arabia to meet with officials in the Ministry of Hajj, the CTE leveled a fierce media attack against the ministry. The CTE affirmed that “the crisis is still ongoing, and the government was only able to get 4,000 visas out of 50,000 (applications) through its intensive communications with Saudi officials. Therefore, it has undermined the rights of Umrah pilgrims. This was the result of the lack of coordination between the Egyptian Ministry of Tourism and the Saudi Ministry of Hajj.”

Officials in the Egyptian Ministry of Tourism stressed that the crisis is being solved, while travel agencies are complaining that it is still ongoing. Rasha Azizi, spokeswoman of the Ministry of Tourism, told Al-Monitor over the phone, “The ministry’s department of tourism agencies has succeeded in its negotiations with Saudi Arabia and acquired 20,000 visas in the last hours prior to the registration deadline. This has partially solved the crisis after Saudi Arabia expressed its understanding of the requirements of the Egyptian tourism sector.”

The Hajj and Umrah Chamber in Cairo and Alexandria reviewed the files of the Umrah pilgrims and worked on finalizing the procedures to allow them to travel in a timely fashion, in coordination with Saudi consuls. In addition, no Umrah pilgrim whose trip was canceled incurred a loss as the ministry made sure there were refunds.

According to the Ministry of Tourism's estimation, the number of visas that Egypt acquired since the beginning of the Umrah season in December and until this Ramadan has reached 935,000, an increase of 100,000 visas in comparison with last year. This comes as a result of the high demand on performing Umrah this year.

Officials in the Saudi Ministry of Hajj informed the delegation of the Egyptian Ministry of Tourism, which traveled to the kingdom in a bid to acquire the suspended visas, “Visas were denied following a royal order and the issue is not only related to Egyptian Umrah pilgrims, but to pilgrims from around the world.” The officials also said that the crisis came as a result of expansion works performed in the Masjid al-Haram. A large number of Umrah pilgrims caused overcrowding in Saudi Arabia this year. This crisis greatly hurts the Egyptian travel agencies since they arrange trips for the largest number of pilgrims in the world.

A member of the CTE's general assembly, Lotfi Abu Zeid, told Al-Monitor, “Travel agencies were compelled to give refunds to pilgrims they contracted with, inflicting losses worth millions of [Egyptian] pounds on them as they already paid for hotel reservation fees for the pilgrims who were not able to travel.”

Abu Zeid continued, “The agencies paid 57% of the hotel reservation fees and will not be able to get a refund. However, there was an agreement with airlines to get a refund for the canceled flights. Unfortunately, the crisis of Egyptian pilgrims happens every year. Last year, around 75,000 pilgrims were stopped from traveling at the last minute. Saudi agents said that this was due to the schedules of the (flights') arrivals and departures. However, the Egyptian agencies made sure to have a coordinated schedule procedure this year.”

“Given the lack of coordination between Egyptians and Saudis, the (same situation) happened again this year, though for different reasons. The number of visas acquired this year for Umrah during the month of Ramadan did not exceed 100,000. Usually, Ramadan Umrah visas are unassigned and the Saudi Ministry of Hajj has announced granting Egypt 170,000 visas during the Ramadan Umrah season. This means that the Ministry of Tourism has again failed to deal with the crisis and has undermined the rights of pilgrims,” Abu Zeid said.

Tourism expert and Chairman of Nile Air Yousry Abdel Wahab said, “Airline companies face the same crisis every year with the Egyptian tourism sector, as the latter demands at the last minute the cancellation of thousands of flights, and this causes interruption in the flight schedules.” He noted, “The crisis is the result of disorganization on the part of Egypt and Saudi Arabia.

He said, “I was waiting for the crisis of Umrah pilgrims to be solved without flights having to be canceled and inflicting huge losses on the tourism sector, by coming to an agreement with Saudi Arabia on providing Umrah visas for Egyptians who paid for [tickets from] airline companies and finalized the procedures of [their] travel preparations. This could have been accomplished by decreasing the visa share of countries that do not have enough pilgrims, with Egypt being the largest country in terms of pilgrim visa demand.”

For its part, the Saudi Embassy in Cairo refused to embroil itself in the crisis. Deena Mousa, the director of the embassy's media bureau, told Al-Monitor in a phone interview, “The embassy has nothing to do with this issue and the Saudi ambassador is not the competent authority. The Saudi Ministry of Hajj is the one concerned with visas.”

The disorganization and inefficient coordination between Egyptian and Saudi authorities is the main reason that thousands of Egyptians for the second year in a row are not able to perform Umrah pilgrimage and are prohibited from traveling at the last minute following the denial of their visa applications. This crisis has inflicted great financial losses on the Egyptian tourism sector.