Recent calls in Egypt to postpone by one year the umrah pilgrimage for those who have already made the trip has raised controversy and is viewed by some as a means of leverage against Saudi Arabia. 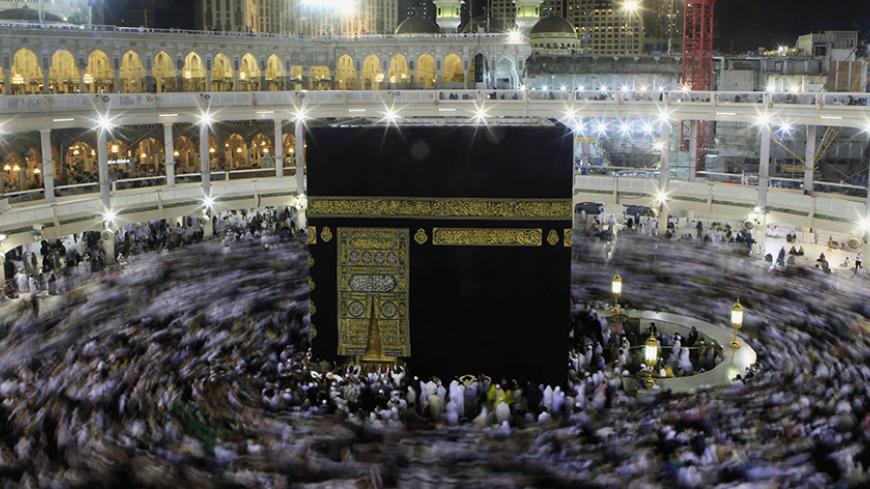 Muslims circle the Kaaba and pray during their Umrah Mawlid al-Nabawi pilgrimage, at the Grand Mosque in the holy city of Mecca, Saudi Arabia, Jan. 13, 2014. - REUTERS/Amr Abdallah Dalsh

On Oct. 12, Youm 7 daily launched a campaign in Egypt to delay performing the umrah for one year for pilgrims who have already performed the religious visit. This would allegedly secure more than $6 billion for Egypt at a time when crucial economic measures need to be taken. The campaign has caused much controversy in the Egyptian street.

Some believe that the Egyptian state is trying to use the campaign as leverage against Saudi Arabia in light of the tension between the two countries over the Syrian crisis.

Tourism companies believe that the campaign came in response to Saudi Arabia’s Aug. 8 decision to increase the price of the pilgrimage single entry visa to 2,000 Saudi riyals ($533), even for pilgrims who are traveling for the second time to perform the umrah, which would cause the tourism companies major losses.

On Oct. 14, Egypt’s Federation of Tourism Chambers stressed that postponing the umrah for one year would secure $6 billion a year for the country and has nothing to do with the relations between Egypt and Saudi Arabia. The Federation warned that any tourism company that did not abide by the decision would be suspended.

Although Saudi Arabia decided Dec. 1 to delay the implementation of the price increase, the tourism companies have not spoken of the initiative’s fate.

According to an Oct. 16 study by the National Center for Political and Strategic Studies on the proposal to postpone umrah for one year, 1.8 million pilgrims perform umrah each year; 476,000 of them perform umrah during the month of Ramadan and nearly 100,000 go on hajj on a yearly basis. Egyptian spending ranges between $3 billion to $5 billion a year on pilgrimage trips. These amounts are taken out of the Egyptian economy and wired to international tourist companies, which puts considerable pressure on the Egyptian economy.

The study said that the reinvestment of these funds would provide Egyptians with 3 million to 5 million job opportunities. The study added that according to official Saudi figures, the total Egyptian spending during the hajj and umrah visits is estimated at around 10.24 billion riyals ($2.7 billion).

Per official Egyptian figures, according to a Federation report, total Egyptian spending during the umrah and hajj season amounts to $3 billion a year. This amount is wired every year to Saudi Arabia, further exacerbating the economic crisis and the lack of hard currency in Egypt.

Although Egypt’s Federation denied any association between postponing the umrah with the tension between Egypt and Saudi Arabia and stressed that it is for mere economic reasons, a number of politicians believe otherwise.

Human rights activist and lawyer Negad al-Borai said Oct. 12, “Nothing dramatic will happen to the Egyptian-Saudi relations or the US-Egyptian ties. What is happening is that every party is trying to leverage the other to the largest extent.”

Borai expressed his disagreement with postponing the umrah as a means of leverage against Saudi Arabia and warned against going too far in antagonizing Saudi Arabia. He stressed that the kingdom could ban its tourists from visiting Egypt.

Egypt’s clergymen were divided into two camps with regard to the issue. The camp opposing the campaign argues that it would lead to mixing religious rituals with political differences. Saif Rajab Qazamil, the dean of the Sharia Law Faculty at Al-Azhar University in Tanta, said Oct. 13, “It is not right to boycott or postpone umrah. God’s rituals are holy and sacred and should not be used for political maneuvers.”

Nevertheless, Khaled Omran, the head of the Fatwa Department at Dar al-Ifta, said Oct 12, “Once repeated, umrah becomes detrimental to the community but beneficial only to those performing them, as is happening now. People ought to reconsider their decisions. Those who seek God’s mercy and blessing ought to seek the greater good of the people and the country as a whole.”

Ehab al-Desouki, the dean of the Faculty of Economics at Sadat Academy, told the press Oct. 12, “Postponing hajj and umrah for one year for Egyptian pilgrims is unacceptable as it is a flagrant interference in the citizen's’ personal affairs. This initiative will not help boost or advance Egypt’s economy.”

He also noted that “if implemented, this decision will not affect the Saudi economy, as Egypt is not the only country whose citizens perform umrah.”

Gamal Bayoumi, the former assistant minister for Foreign Affairs and the secretary-general of the Union of Arab Investors, told Al-Monitor, “This initiative is impractical and far-fetched, as it interferes in the freedom of individuals, which is religiously and morally unacceptable."

Commenting on how the initiative would impact Egyptian-Saudi relations, Bayoumi said, “Egypt and Saudi Arabia have common interests and it is unlikely for such an initiative to affect ties between the two countries despite the attempts of some to use it to create tension between the two parties. Saudi Arabia will not be affected by postponing umrah for one year.”