Under the new rules, only 6,000 citizens and residents per day are permitted to perform umrah. 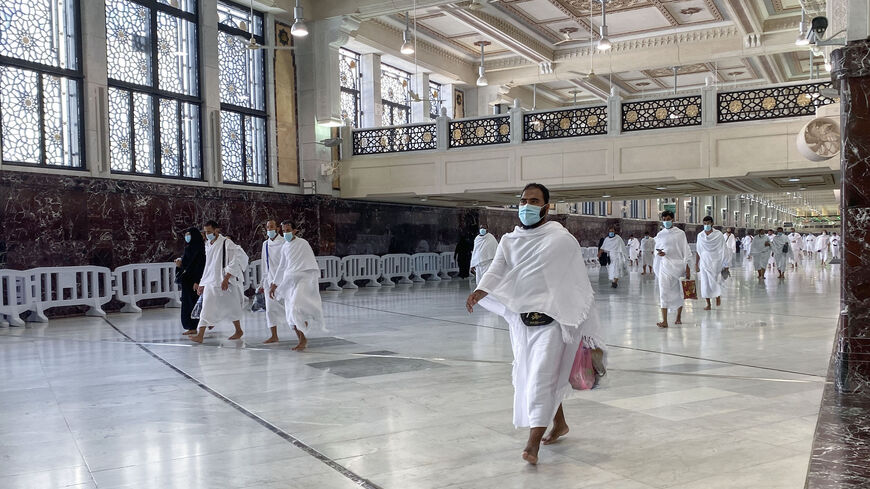 Saudis and foreign residents walk down a hallway during umrah in the Grand Mosque complex in the holy city of Mecca, on Oct. 4, 2020, as authorities partially resume the year-round pilgrimage amid extensive health precautions after a seven-month coronavirus hiatus. - BANDAR AL-DANDANI/AFP via Getty Images

A limited number of citizens and residents of Saudi Arabia can now perform umrah at the holy cities of Mecca and Medina, seven months after the pilgrimage that draws millions to the kingdom each year was put on hold due to the coronavirus.

Some 6,000 people performed the ritual on Sunday while adhering to strict social distancing measures. The Interior Ministry announced last month that authorities would gradually increase the number of pilgrims allowed in Mecca’s Grand Mosque. By Nov. 1, Saudi officials plan to welcome up to 20,000 pilgrims and 60,000 for prayer daily from a list of countries considered safe for travel.

Visitors must observe health protocols, including wearing face masks and avoiding physical contact, and are required to reserve a time and date on an app developed by the Ministry of Hajj and Umrah.

In March, the kingdom suspended umrah pilgrimages, which attract some 19 million people to the holy cities annually, as part of measures to curb the spread of the coronavirus. The bigger summer pilgrimage in Saudi Arabia, known as the hajj, was limited to just a few thousand socially distanced citizens and residents this July.

Religious tourism revenues have plunged in recent months. Before the pandemic, the oil-dependent kingdom set a target of hosting 6 million people for the hajj and 30 million for umrah by 2030.

Saudi Arabia has the highest case count among the Gulf Arab states, but health officials in Saudi Arabia have observed a declining number of coronavirus cases in recent days.

The Health Ministry confirmed another 379 infections on Monday, bringing the total since early March to 336,766. With 23 more deaths from the virus, the death toll now stands at 4,898. Of the new infections, 82 cases were recorded in the holy city of Medina.