Russia opted for an approach based on uncertainty in its decision to leave the OPEC-plus deal, but is it punching above its weight? 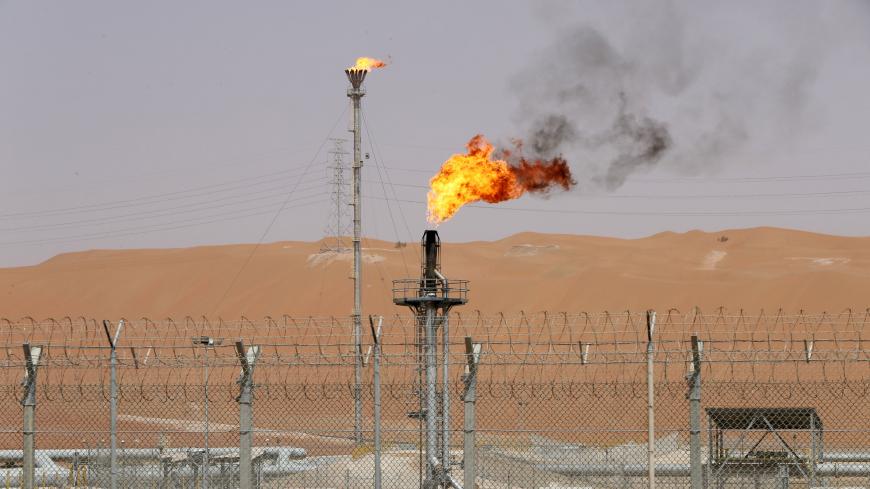 Flames are seen at the production facility of Saudi Aramco's Shaybah oilfield in the Empty Quarter in Saudi Arabia, May 22, 2018. - REUTERS/Ahmed Jadallah

MOSCOW — As the oil market experiences turbulent times, Moscow projects an image of a “calm power.” The breakup of the Russian-Saudi oil deal over production cuts known as OPEC-plus has helped cause oil prices to plummet to new lows and created associated geopolitical risks.

Following the end of the OPEC-plus agreement, Saudi Arabia dropped prices and said it will boost production.

On March 20, Kremlin spokesman Dmitry Peskov dismissed speculation that Russia and Saudi Arabia are in an oil price war. “There are no price wars between Russia and Saudi Arabia. There is a very unfavorable pricing environment for many countries,” Peskov said. He took issue with those who said this is a catastrophe for Russia, “since as our president and our government reiterated that we have a solid safety margin for several years, which will support fulfilling all social commitments, development plans, and so on.”

The remarks of President Vladimir Putin’s spokesman came as a virtual response to President Donald Trump’s statement that he would intervene in the standoff between Saudi Arabia and Russia “at the appropriate time.” The price drop is also hurting US oil companies; the United States, Russia and Saudi Arabia are the world's top oil producers.

Peskov responded, “Russia and Saudi Arabia have good relations, a partnership. We do not think that anyone should intervene in these relations."

Russia’s divorce with the OPEC-plus deal came rather abruptly but wasn’t entirely unexpected for people in the industry. Al-Monitor’s Nikolay Kozhanov concluded in April 2018 that Russia might not be ready for a long-term commitment to the deal.

Kozhanov, writing about the recent developments, said, “Moscow definitely took the Saudi factor out of the equation when making a decision on further Russian participation in OPEC-plus.”

Indeed, the drivers for Russia’s deal with OPEC — and disincentives for staying in the deal — had more to do with other factors.

There were at least two “schools of thought” vis-a-vis OPEC-plus in Moscow.

One — the Kremlin — appreciated the idea that the deal would help Russia make more money based on the pricing. Eventually, the deal resulted in economic benefits for Russia, which saw its National Wealth Fund double its reserves from $65 billion (4.04 trillion Russian rubles) to $124.4 billion (7.7 trillion rubles) in 2019. Russia’s National Wealth Fund is a part of federal budget assets, primarily supporting the country’s pension system.

The downside was that Russia would virtually have to give up a share of its market presence to competitors. Since the end of 2016, oil production in the United States has grown by 45%, or by 4 million barrels per day, This increase represents 35% of all oil production in Russia. This is where the second “school of thought” kicked in.

Propagated by Igor Sechin, the head of the Russian oil giant Rosneft, it saw the deal with OPEC as a "strategic threat" that played into the hands of the US shale oil industry. Observing the highly volatile situation in the market, the Kremlin, however, kept postponing its departure in hopes for better timing.

This time had apparently come with the COVID-19 pandemic. The fall in global oil demand in the first quarter of 2020, much of it apparently due to the coronavirus, was the biggest in the history. Much of the impact of the virus, however, may impact the global economy with a two-month lag. Oil buyers in China have canceled their March and April oil order placements, so it remains to be seen how the market will perform in the second quarter. The 2020 global oil demand is expected to fall below 100 million barrels per day.

In a recent interview with Reuters, Russia’s Deputy Energy Minister Pavel Sorokin said there were two scenarios discussed in the OPEC-plus meeting prior to the breakup of the deal. One, promoted by Moscow, suggested the extension of the deal for one more quarter to see the actual impact of the coronavirus pandemic on oil markets. The expectation in Moscow was for oil to fall $5-8 per barrel but that there would be enough time to assess production risks.

“It was an 'optimal option' that wouldn’t have collapsed the market but give time for the making of more prudent policies,” Sorokin said.

The other proposal, advocated by the Saudis, was to cut production by 1.5 million barrels per day first for one quarter, with the possibility of further extension. Russia would have had to cut about 300,000 barrels per day (bpd) — double what it had to cut under the current commitments.

“Beside that we deemed [the Saudi] proposal excessive, for us it’s harder to carry out technologically. We have a more complicated production structure than our Arab partners, we have more drilling sites, less maneuver to cut the production.” He said that 600,000 barrels per day “is too extreme and these levels of production are harder to resume. Some of it might have never come back which means we’d lose jobs, see lower investments.”

The statements by the Russian officials suggest that at some point both “schools of thought” merged into one decision to leave the deal. Moscow was assured that staying in the agreement would no longer be beneficial for the oil market and the Russian economy and Rosneft’s reasoning that the OPEC-plus limits gave US producers more leverage also sounded more convincing. Therefore, Moscow felt it had both market and political incentives to leave the deal.

The Russian logic was that by strengthening its own position in the market and with no limits imposed by the OPEC-plus obligations, Russia would double its oil revenues once the oil price goes back up to a high level. Sorokin said that the ministry “modeled all types of scenarios possible to devise this strategy” and that so far it has been “accurate.”

Sorokin told Reuters that Russia officials forecast the price to fall to $30 per barrel within the first days and “forecast the return of prices to the range of $40-$45 in the second half of the year and to $45-$50 next year, providing there’re no force majeure circumstances.”

Critics of the Russian move argue that the price of $45 per barrel is only possible should Moscow resume negotiations with the OPEC on new production policies.

While Russia would not mind establishing a new status quo, Saudis looks determined to continue the confrontation. The head of the Russian Direct Investment Fund, Kirill Dmitriev, confirmed that Moscow and Riyadh are not holding talks on joint actions on the oil market in the collapsing prices environment.

Some in Moscow see the Saudi reaction as a bluff aimed at forcing Russia back to the negotiating table. While Riyadh had more ways to manipulate the market and bigger production capacities than Moscow, it may not be ready for a long-term oil price war itself. Saudi Arabia’s economy is more dependent on oil than Russia's; the Russian budget can still be in surplus with the price of oil over $42 per barrel, whereas the Saudis need at least $80; Russia also has bigger reserves to draw on — though a bigger population to feed.

All of this may not necessarily matter given that the Russian strategy — although seemingly well-reasoned and better calculated — is based on uncertainty that the coronavirus introduces to the world economy. At the end of the day, Russia could take a leading position over oil market regulation, eliminate or weaken some key competitors and create a better environment for the establishment of stable prices. Or it could find itself punching above its weight — yet again — and bring the United States into the fight and suffer more devastating consequences from new sanctions. Until either outcome materializes, Russia will have to suffer the losses with the rest of producers and hope that the higher-risk uncertainty-based approach will turn into dividends. Not that Moscow hasn’t encountered this bifurcation in the Middle East before.