Turkey's iconic Grup Yorum has not been able to perform since 2016 and a number of its members have been jailed on dubious terror charges. 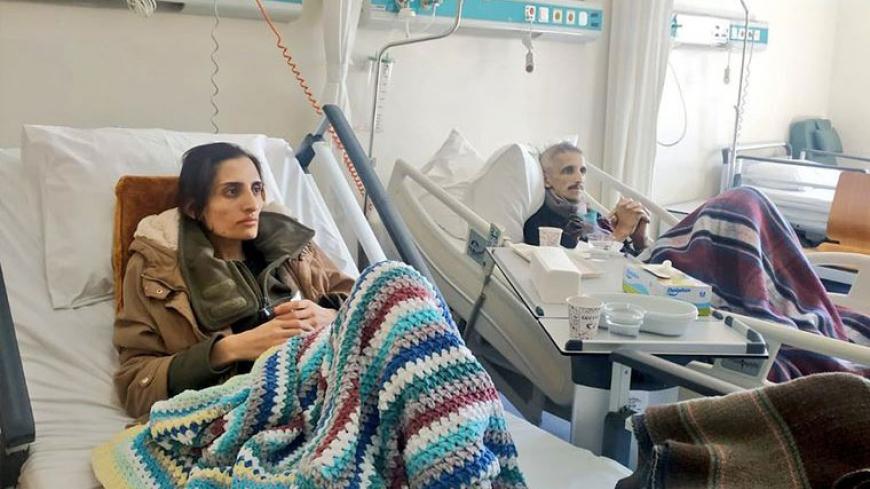 Throughout its 35-year existence, the folk music collective Grup Yorum has become one of the most iconic and popular groups of its kind in Turkey. With its rotating cast of members, they have played massive concerts throughout the country and abroad while enjoying consistently strong album sales.

The group's defiant left-wing stance has resulted in no small amount of persecution over the years, culminating in an outright ban of its concerts by the ruling Justice and Development Party, which has not allowed the band to perform since 2016, and has jailed a number of its members on dubious terror charges.

A cultural center linked to the group in the Istanbul neighborhood of Okmeydani has been raided more than 10 times in recent years, and Grup Yorum's instruments have been destroyed in the process.

The government claims that Grup Yorum is linked to the banned leftist militant group, the Revolutionary People's Liberation Party/Front (DHKP/C), which is officially designated a terrorist organization by Turkey, the United States and the European Union.

Two of Grup Yorum's members, Helin Bolek and Ibrahim Gokcek, have been on a “death fast” for more than 250 days, a hunger strike in opposition to the government's targeting of the group, which the members vow will continue until they die unless their demands are met. These include the ban on the group's concerts being lifted, the jailed members being released and for the legal cases against the musicians to be dropped.

On March 11, Bolek and Gokcek were forcibly detained and hospitalized. Photos of the musicians surfaced showing them looking frail and gaunt in their hospital beds. In a speech in parliament earlier this month, pro-Kurdish People's Democratic Party deputy Omer Faruk Gergerlioglu said that Bolek was approaching death and that Gokcek was so thin that his ribs could be counted and that his physical and mental capabilities had decreased substantially.

“No one can silence Grup Yorum. It’s either victory or death,” said Gokcek after being taken to the hospital. Bolek and Gokcek were discharged on March 17.

Even prior to the coronavirus pandemic that has swept the news cycle in Turkey, the Grup Yorum hunger strikers and their struggle was mostly relegated to urgent tweets, online posts and the pages of the few opposition newspapers left in the country, mainly ignored amid a period of geopolitical strife and heightened tensions between Ankara and Moscow following the killing of 33 soldiers in the Syrian rebel-controlled province of Idlib in late February.

However, Grup Yorum carries significant cultural clout in the context of modern Turkish music, which makes their plight even more grim, another reminder of the sweeping crackdown on dissidents that has intensified in the past several years, which will surely continue to be buried under the coronavirus outbreak and its dominance of the domestic and international media.

“Grup Yorum chose to be a group of the people. They were always on the side of the oppressed, those who had experienced cruelty, and those engaged in resistance, and they gave them strength with their songs. While they were active, they made history in the country with their songs and they shared the voices of those who couldn't be heard with millions of people. Their albums always sold well and their concerts were the most crowded in Turkish history,” Meric added.

The group is part of a long history of protest music that spans centuries in these lands, Meric explained, carrying on the legacy of outspoken folk musicians like Asik Mahzuni Serif and Asik Ihsani, while combining the spirit of resistance of 16th-century Alevi poet Pir Sultan Abdal with the sounds of baglama legend Ruhi Su. (The baglama, also referred to as the saz, is a stringed musical instrument.)

In 2012, they shared the stage with Zulfu Livaneli, a popular musician, author and politician and former parliamentarian who placed third in the hotly contested 1994 Istanbul elections, where five candidates received between 12% and 25% of the vote. The winner, President Recep Tayyip Erdogan, clinched 25% to Livaneli's 20%, a race the latter may have won had another center-left candidate who came in fifth with 12% of the vote not chosen to run.

The government using baseless terror charges to target outspoken opponents is a common tactic, and Grup Yorum is among the victims of this approach. However, in spite of efforts to demonize the group, they are unlikely to corrode the formidable legacy or the culture of resistance it has built over the past three decades.

“This is precisely why the Grup Yorum members are on a death fast: to sing their songs, perform their concerts, be able to freely travel inside their country and continue their cultural activities. Their demands are that simple,” Meric said.