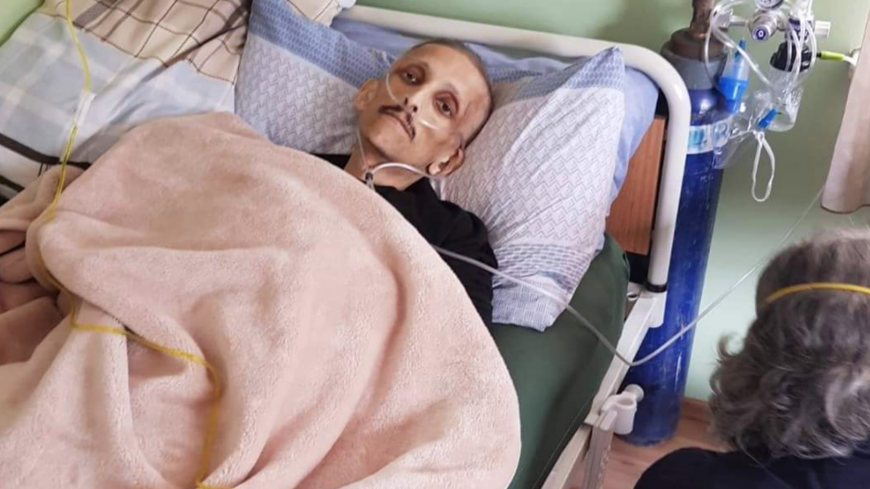 Ibrahim Gokcek is pictured in the hospital on May 5, 2020. - Twitter/Freegrupyorum

A second member of a defiant left-wing folk band has died while on a hunger strike protesting the Turkish government.

Ibrahim Gokcek died today, two days after suspending his “death fast” to receive medical treatment. Gokcek had gone 323 days without food, and was in critical condition.

Gokcek was a member of Grup Yorum, a popular music group barred from performing in Turkey since 2016. The country’s ruling Justice and Development Party had jailed many of its members, including Gokcek, on trumped-up terror charges.

Gokcek and bandmate Helin Bolek began a hunger strike while in prison to draw attention to the government’s treatment of the group. The two were released in November but continued their hunger strike in solidarity with their fellow jailed bandmates.

On March 11, Turkish police raided their homes and forcibly took them to the hospital, but Bolek and Gokcek refused treatment and were released a week later.

“No one can silence Grup Yorum. It’s either victory or death,” said Gokcek at the time.

Bolek died April 3, the 288th day of her hunger strike.

Formed in 1985 by students at Marmara University in Istanbul, their music covered a range of sensitive topics in Turkey, including Kurdish rights, Marxism, anti-authoritarianism and women’s issues.

“Grup Yorum chose to be a group of the people. They were always on the side of the oppressed, those who had experienced cruelty, and those engaged in resistance, and they gave them strength with their songs,” Murat Meric, a music writer and radio host, told Al-Monitor in March.

Turkey accuses Grup Yorum of links to the Revolutionary People's Liberation Party/Front, a leftist militant group designated a terrorist organization by Turkey, the United States and the European Union. The music collective has dedicated songs to the militant group's members, but denied any official ties to the organization.

Gokcek was among the thousands of political prisoners languishing in Turkish prisons on terrorism charges for alleged ties to various groups, including the banned Kurdistan Workers Party and the Fethullah Gulen movement, which the government blames for the failed coup attempt in 2016.

Rights organizations and opposition groups have called on the Turkish government to unconditionally release journalists, activists, academics and others jailed solely for their political views. Recent legislation to release tens of thousands of inmates over coronavirus fears excluded political prisoners.

“The Turkish authorities’ grievous attempts to silence their voices is abominable,” said PEN America’s Julie Trebault in a statement on Gokcek’s hunger strike.

“Artists should be allowed to live and work without fear, and they should not have to deprive themselves of their life and wellbeing in order to do so.”