To the extent Turkey is active in Middle Eastern politics, especially in Syria, and is a party to confrontation with Iran, all the "terror exports" of the Middle East will be heading to the Turkish market, writes Cengiz Candar. 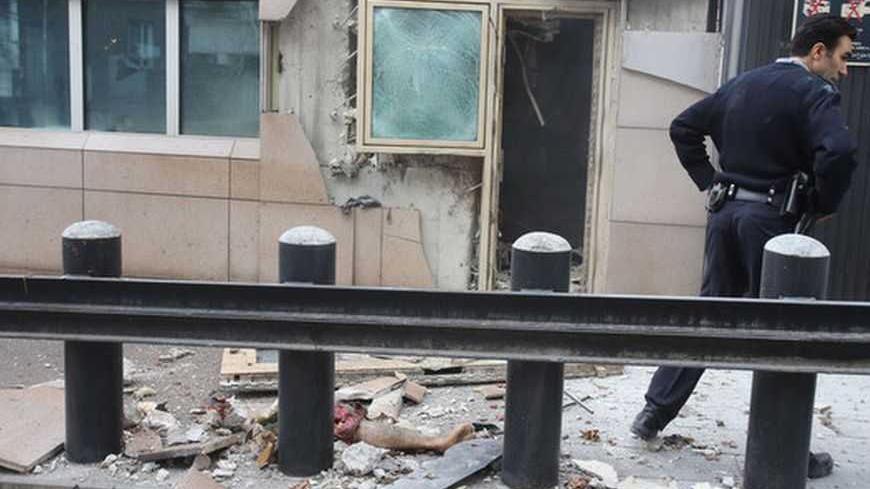 A security officer stands after an explosion at the entrance of the U.S. Embassy in Ankara on Feb. 1, 2013. - REUTERS/Yavuz Ozden/Milliyet

Who was behind the suicide bombing of the U.S. Embassy in Ankara, and what did it mean?

Without missing a beat, Turkey’ newspaper columnists and TV commentators began their diagnosis and analysis. Of course, alongside them was an avalanche of "terror experts," as TV anchors like to label them, who appeared from nowhere, sharing expertise of unknown origins.

Life became easier for columnists and "terror experts" as soon as the suicide bomber was identified and in less than 24 hours, the organization known as the Revolutionary Peoples’ Liberation Party-Front (DHKP-C) claimed responsibility for the action "against American imperialism occupying our land.” Once the identity of the bomber and the organization he belonged to were known, the terror operation was easily explained. Yes, they did mention the neurological ailment the bomber was suffering from, but there was not much mention of why he suffered from it.

The bomber of the US Embassy was one of 816 prisoners who went on hunger strike on Oct. 20, 2010 demanding closure of the extremely harsh prisons known as F-Type and annulment of the Anti-Terror Law. That hunger strike became a death fast.

Although at its beginning, the hunger strike was believed to be the work of the PKK, it soon became clear that DHKP-C militants were spearheading it. These 816 prisoners had something else in common: Most of them were Alawite youth from the Istanbul fringes of Gazi Mahallesi and Kucukarmutlu, which not many people had heard of.

Such a mass death fast was something Turkey had not witnessed before. Five well-known personalities of leftist tendencies went to Bayrampasa Prison. Two of them, Yasar Kemal and Orhan Pamuk, were world-famous novelists. Another was world-class musician, writer and filmmaker Zulfu Livaneli, and the last two were well known journalists Can Dundar and Oral Calislar.

Even before these respected mediators could conclude their mission, the Turkish state launched an operation dubbed “Return to Life.” Never mind returning to life, 30 prisoners were killed in a botched operation that became an unprecedented scandal. The hunger strikes had ended in blood, and many other prisoners had contracted Wernicke-Korsakoff syndrome, a brain disorder that can cause psychosis.

More than 200 prisoners charged with terrorism and who had become ill with Wernicke-Korsakoff syndrome were granted amnesty by then-president Ahmet Necdet Sozer because of their health problems and were released.

The attack against the U.S. Embassy illustrated how all of those prisoners had become an “investment for future suicide bombings.” This is a totally new phenomenon. We knew that suicide bombings were a mode of operation for al-Qaeda-type fundamentalists and a few Palestinian organizations. But Turkey’s DHKP-C, with leftist-secular ideological origins and nothing in common with religious fundamentalists, is a brand-new element in the battle against terror.

Some commentators have noted the Alawite domination of the DHKP-C and how it was impossible to explain the death fasting of more than 800 prisoners with “leftist ideology.” In that case, it could well be that the suicidal motivation of Shiites and Alawites derived from the Karbala culture — that is, to emulate Imam Hussein. From this perspective, it may be more accurate to explain DHKP-C suicide bombers are not adhering to leftist, communist or any other secular ideology but to sectarian culture and traditions.

If this is the appropriate approach to the issue, then it may possible to understand the attack against the embassy within the sectarian context of violence and strife in the region.

In that case, fingers point to the Syrian regime, which has many commonalities with the DHKP-C. Several “terror experts” have also underlined this possibility. Moreover, some circles are well aware that one of the most important DHKP-C leaders is from Antakya and very close to the Syrian intelligence.

Then why was the U.S. Embassy selected as the target?

Anywhere in the world — and certainly in Turkey — any suicide attack against a U.S. target, especially an embassy, will have tremendous impact. But in this latest attack it is doubtful whether the real target was the U.S.

If our hypothesis is that the attack was the work of Syrian intelligence using the DHKP-C as a proxy, then this desperado act that did not cause any real damage to the USA apart from taking the life of Turkish security guard must be assessed by not looking the building attacked, but where the building is.

The target of the attack and the recipient of the message is Turkey, Ankara and the Erdogan rule.

The message sent to Erdogan and Turkey is that for any role you play in Middle East politics, and for any position you take against the Syrian regime, you will be paying with equal doses of terror.

We have known for a long time that the Middle East exports terror as much as it does oil. Its underground terror organizations are as abundant as its underground oil reserves.

To the extent Turkey is active in Middle Eastern politics, especially in Syria, and is a party to confrontation with Iran, these “exports” of the Middle East will be heading to the Turkish market.

This is how we should understand the suicide bombing against the U.S. embassy in Ankara.