Jordan’s King Abdullah approved the activation of Defense Law No. 13 as part of efforts to contain the spread of the coronavirus, but some officials fear the measure will deeply impact the kingdom’s fragile economy. 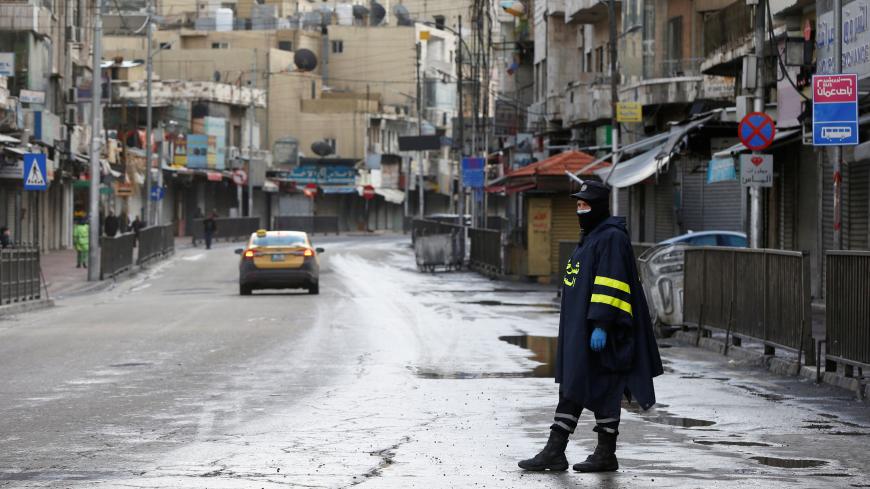 A traffic police officer wearing a protective facemask stands on the street as the country takes measures to fight the spread of the novel coronavirus, Amman, Jordan, March 18, 2020. - REUTERS/Muhammad Hamed

Jordan went into an unprecedented lockdown March 18, a day after King Abdullah II issued a decree activating Defense Law No. 13, which gives the prime minister extra powers to enforce a set of measures to combat the spread of the novel coronavirus.

On March 16, the government adopted a number of decisions including the deployment of the army in and around cities and on main highways connecting provinces. It also closed most government ministries and private sector offices, including banks, for a period of two weeks. It suspended all international flights as of March 18 and closed its land borders. It called on Jordanians to stay home and not go out unless it was absolutely necessary. All schools across the kingdom have been closed until further notice.

The measures include the suspension of prayers at mosques and churches, banning wedding events and funeral gatherings, and limiting crowds to no more than 10. The government also ordered all restaurants and malls closed as well as the shutting down the stock market.

These tough measures were taken as the king held a number of top-level meetings with officials and advisers March 15-16, commending “the efforts implemented by the government in dealing with COVID-19 and noting the need to continue providing health and education services to the public while maintaining the supply of basic commodities,” said The Jordan Times, quoting a Royal Court statement.

On March 18, Minister of Health Saad Jaber announced there were 48 confirmed cases of novel coronavirus infections, adding there could be around 100 other undiscovered cases. He predicted the number of new cases would rise in the coming days before it begins to drop. Until March 18, there were no fatalities among the infected.

In order to contain the spread of the virus, the government released an unspecified number of first-time offenders on March 17, while the State Security Court ordered the release of 1,500 detainees who were in custody awaiting trial.

All passengers arriving by air before the lockdown went into effect were quarantined at five- and four-star hotels near the Dead Sea and in Amman. The total number of those in quarantine by March 17 was estimated to be at around 5,800.

Regarding the official measures to contain the spread of the virus, The Jordan Times reported March 17 that an opinion poll conducted by IPSOS, a global market research and consulting firm, found that 83% of respondents approve the government’s call for people to remain at home. Another 70% were satisfied with the enforcement of Defense Law No. 13, with 19% indicating they “have no idea” about the enforcement of the law, according to the paper.

This was the first time the 1992 Defense Law has been activated. In the Royal decree, the king directed the government to ensure “the implementation of the law and the orders issued under it will be within the most limited scope possible.” He also instructed the government to implement the law without infringing on Jordanians’ political and civil rights but rather by "safeguarding them and protecting public liberties and the right to self-expression enshrined in the Constitution.”

Despite what could be considered as draconian measures adopted by the government, there is a sense of relief and pride that official efforts to contain the spread of the coronavirus had surpassed those of Western countries, where delayed action by Italian, French and Spanish governments had exacerbated the crisis.

Writing in the daily Addustour March 18, political columnist Orieb al-Rintawi said the way the Jordanian government has dealt with the virus has been exceptional, and while one could disagree politically with the government over policies, one should be brave enough to praise it for what it has done so far in controlling and containing the threat. “By placing thousands of returning Jordanians in five- and four-star hotels and providing them with food, drink and medical care, the state, both in its military and civil form, had scored high in front of the world and all Jordanians,” he added.

Political columnist Maher Abu Tair praised the government’s measures but called on the government to ready itself to deal with difficult challenges in the days and weeks to come. Writing in the daily Al-Ghad March 18, he said the government should be ready to deal with the plight of thousands of retail shops that will be closed for weeks and unable to pay rent in the coming months. He also pointed to the huge number of Jordanians who make a daily living by driving taxis, working as day laborers and at fast-food outlets. “Those people will be denied income for weeks, and they have responsibilities toward families and must be helped as part of protecting our social security,” Abu Tair said.

For now, Jordanians are trying to cope with the impact of the new measures. On the first day of the lockdown, most of Amman’s streets were empty; the usually gridlocked main intersections on business days were eerily quiet. The main question now haunting officials and the public is how long this lockdown will last and what deep economic impact it will have on the kingdom’s fragile economy.