Egypt, Jordan pay for luxury quarantine to rein in coronavirus

Hotels and resorts in Egypt have welcomed people who have to be quarantined or who want to self-isolate; in Jordan, the government paid for Jordanians to be quarantined in Dead Sea resorts to stem the spread of the coronavirus. 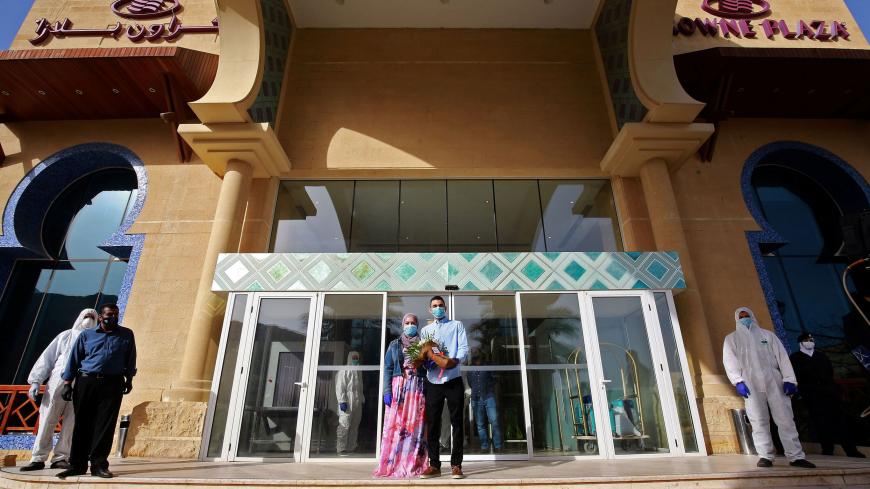 Jordanian newlyweds pose with flowers at the entrance of a Dead Sea resort where they have been in quarantine for 14 days in Jordan, March 30, 2020. - Khalil Mazraawi/Pool via REUTERS

Egyptian hotels and resorts, which are feeling the pinch as tourist arrivals stopped with the suspension of flights, may target self-quarantining guests to make ends meet. Egypt suspended all flights as of March 19 as a precautionary measure against the spread of COVID-19. On March 24, it extended the suspension for two more weeks.

Some hotels and resorts may also bank on Egyptians who choose to self-isolate as a result of the spread of the novel coronavirus across the country.

Something similar took place in Jordan, where hotels and resorts in the Dead Sea area were turned into places of quarantine for citizens during the lockdown.

The total registered cases of coronavirus in Egypt and Jordan stood at 1,560 and 358, respectively, as of April 9.

“Le Meridien Cairo Airport and other hotels were selected to be places of quarantine for Egyptians coming home from all over the world. The government paid for their quarantine through Tahya Misr (Long Live Egypt) Fund. In Alexandria, some hotels served as quarantine for foreigners on board stranded ships in the Mediterranean,” Bassem Halaka, president of the Travel Agents Trade Union, told Al-Monitor.

Minister of Information Osama Heikal said April 1 that President Abdel Fattah al-Sisi had instructed the government to pay for forced quarantine at hotels from the Tahya Misr Fund.

Rami Fayez, owner of a resort in Marsa Alam, 660 kilometers (410 miles) south of Cairo, told the Sada Elbalad news portal April 4 that 275 passengers coming from the United States are now quarantined for 14 days in his hotel. He did not, however, reveal figures on Egyptians who are quarantined at his resort.

Fayez said residence would be free of charge for Egyptians wishing to quarantine in his hotel, but those who are only seeking self-isolation would have to pay. The Tahya Misr Fund would cover those who returned home and were forced to quarantine to protect fellow Egyptians from infection.

“Foreigners who refused to fly home are also staying at some hotels and resorts in Sharm el-Sheikh and Hurghada as a measure for self-isolation. However, for the man in the street, most people prefer staying at home. When their income is at stake, common Egyptians tend to save money and stockpile food commodities,” Halaka said. He said Egyptians had withdrawn roughly 30 billion Egyptian pounds ($1.9 billion) from banks in March.

Halaka said some Egyptians would go to their own chalets or stay at resorts in Sinai and in Hurghada along the Red Sea. “Hotels have very limited areas, while resorts are spacious by nature. Distances between housing units and open landscapes make resorts the perfect place for quarantine,” he said.

So far, there are no official figures on the number of rooms in resorts that have been booked by Egyptians.

In Jordan, the authorities took similar measures. However, geography played a key role in view of the isolated location of the Dead Sea. Distances between hotel units and open landscapes made it advantageous to use Dead Sea hotels and resorts as quarantine facilities, said Khalaf Tahat, the dean of the Mass Communication Faculty at Yarmouk University in Jordan.

“These resorts and hotels are away from any residential districts and human gatherings, so it was easy to declare a military zone in order to control access to the area. The whole Dead Sea area was closed by the military. Jordan has carried out a kind of institutional quarantine to combat COVID-19,” Tahat said.

The first step was to rein in the coronavirus infections by meticulously registering cases of infections, the media professor said, noting that a crisis management team was formed.

There are no quarantined people in Jordanian hotels at present.

“From the very beginning, the authorities here took a pragmatic move favoring the health of the Jordanian people at the expense of political relations. All non-Jordanians coming from COVID-19 infected countries such as Iran, Italy, China, South Korea and Spain were denied entry. Only Jordanians returning from these countries were provided 14-day quarantine,” Tahat said.

The authorities suspended all flights at Jordanian civil airports as of March 17 until April 13.

“The crisis management team, supervised by King Abdullah, and the Ministry of Health increased the number of epidemiological investigation teams to 60 across the country. These teams were deployed to security squares — are areas that were isolated where infections were reported. Irbid, the second-largest city in Jordan after Amman, was isolated and run by the Jordanian army,” he said, adding that infected people were transferred to the places of quarantine along the Dead Sea.

Tahat said any people living in a household where someone tested positive were quarantined as well. “More than 15,000 tests have been conducted since the beginning of the crisis,” he said.