Al-Aqsa Mosque closed to Muslim worshippers to protect their lives

The Jerusalem-based Islamic Waqf Council has managed to close Al-Aqsa Mosque because of the coronavirus outbreak, amid fears that Jewish extremists would take advantage of the crisis. 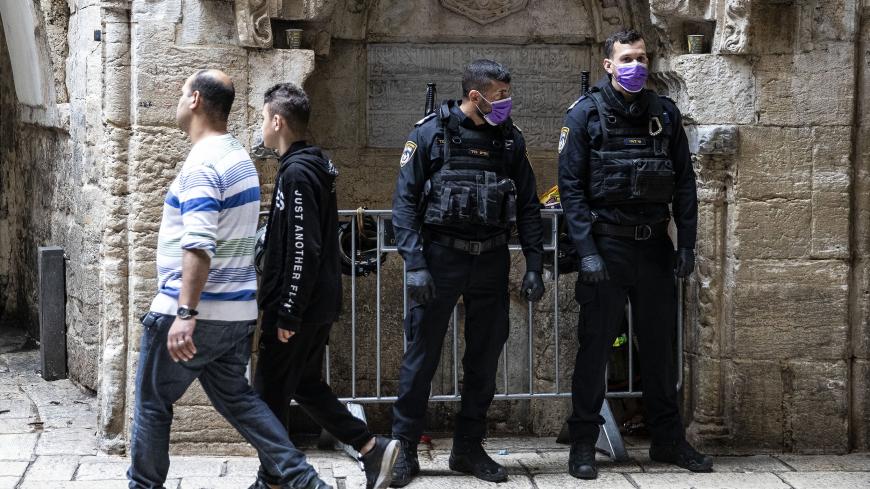 Outside the Al-Aqsa Mosque after the Islamic Waqf Council announced the closure of prayer places as a precautionary measure to prevent the spread of the coronavirus, Jerusalem, March 15, 2020. - Mostafa Alkharouf/Anadolu Agency via Getty Images

The Jerusalem Islamic Waqf Council announced an unprecedented decision March 23 to temporarily deny Muslim worshippers access to Al-Aqsa Mosque, Islam’s third holiest house of worship. The decision taken by the Waqf Council was a bitter one, according to a statement issued by the council, which is comprised of leading Jerusalemites and appointed by Jordan, the custodian of holy places in Jerusalem.

A senior official in Amman who asked not to be identified told Al-Monitor that earlier Israeli attempts to convince Jordan to unilaterally suspend prayers at the mosque failed when Israel tried to link the decision with the end of daily visits by Jewish groups.

“The idea of equating our decision with that of those who enter the mosque area through an alternative way is rejected by Jordan,” the source said. The alternative area is the Mughrabi Gate, which Israeli security alone controls. All other gates to the UNESCO world heritage site are manned by Jordanian Waqf guards along with a member of the Israeli police.

As part of their pressure tactics, Israeli police paid a visit March 21 to the house of the head of the Islamic Waqf Council, Sheikh Abdul Azim Salhab, and handed him a 5,000 shekel ($1,400) fine after the council allowed Friday prayers at the mosque the day before.

Ahmad Budeiri, coordinator of the Jerusalem Alliance Confronting Coronavirus, told Al-Monitor that efforts to prevent the spread of the novel coronavirus were taken by the Islamic Waqf Council. “After various discussions and consultations, the [council] agreed that prayers are to be held outdoors and that each worshipper must abide by having a reasonable distance from each other.” The Jerusalem Alliance, an ad hoc voluntary organization made up of 72 nongovernmental organizations, has been active in advocating for safety in preventing the spread of the coronavirus by providing online awareness content and organizing volunteers to disinfect the mosque area and other locations in the Old City.

The delay in making the decision to end Muslim prayers came as a leaflet by Jewish extremists who are advocating for Jewish takeover of the mosque area materialized. The Hebrew language leaflet states: “There are no Arabs on the Temple Mount. Al-Aqsa mosque is locked. The police are strictly implementing the Ministry of Health's instructions, which allow assembling of no more than 10 people for religious purposes and is allowing Jews to ascend to the mount (think for yourselves on the implications). Days such as these create a new reality on the mount. This is the time to ascend to the mount. And as in days of King David to pray that the pandemic stops.”

There have been widespread concerns among Palestinians that these extremists will use this moment to take control of Al-Aqsa Mosque area, although no concrete attempts have been made.

While extremists’ positions are not Israeli mainstream thinking or even the policy of the government and police, there was worry among the Islamic Waqf Council leaders, Palestinian Muslims in general and the officials in Amman. “Because the desires of the Jewish extremists were so public, the optics of any decision to suspend prayers had to be carefully managed so as not to give the impression of a quid pro quo with the demands of Jewish extremists,” the senior Jordan source said.

The council says that they were careful not to fall into the trap of equating their decision with the halting of Jewish visitors and the solution was finally delivered by the Israeli police. Shortly after the second round of Jewish visits ended, the Israeli police closed the Mughrabi Gate and informed the council of that decision. Muslims continued their outdoor distance worshipping for the afternoon of March 22 and evening prayers, and after a meeting of the council on the night of March 22, a decision was made to “temporarily suspend” prayers by closing the mosque to worshippers while keeping the Waqf guards and employees on duty.

The coronavirus has changed many priorities and forced the Islamic Waqf Council to decide for the first time since the 1967 occupation to close the holy mosque to Muslim worshippers in an effort to protect them and stop the virus from spreading. At the same time, they didn’t allow Israelis or Jewish extremists to take advantage of a health pandemic to create newer facts on the ground in Jerusalem.