A group of Jerusalem-based activists launched an alliance to raise awareness and provide emergency needs to the Palestinian population in East Jerusalem amid the coronavirus outbreak. 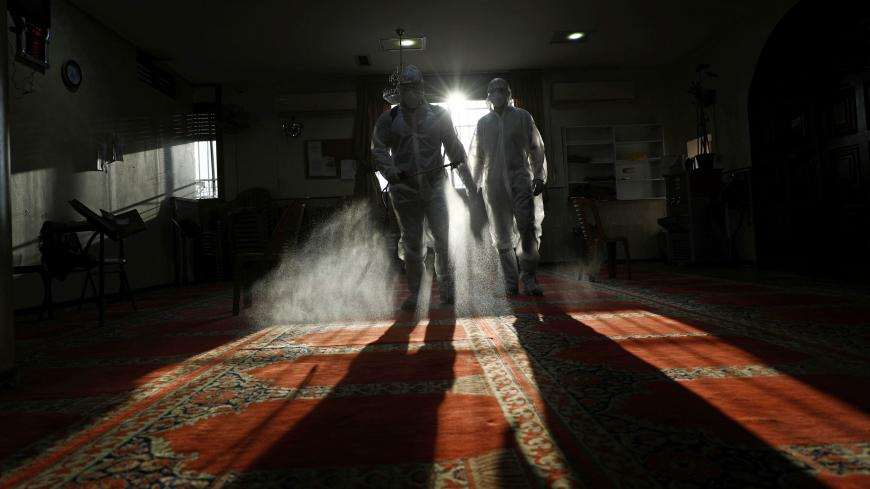 The coronavirus has triggered a badly needed alliance in East Jerusalem. Al-Tajamu al-Maqdisi (the Jerusalem Alliance) was launched March 15 to confront the novel coronavirus by volunteers and Jerusalem-based nongovernmental organizations with the aim of raising awareness and providing emergency needs for the city’s 350,000 Palestinians.

Ahmad Budeiri, the coordinator of the alliance, told Al-Monitor that the group is made up of 36 Jerusalem-based organizations and volunteers and is not a political entity.

“We are dealing with the issue of the coronavirus strictly from a humanitarian point of view and we are basing all our efforts on sound advice from professionals, especially the World Health Organization [WHO], which is part of our alliance,” he added. A number of international NGOs are part of the alliance.

Budeiri said that three committees were established to support the effort against COVID-19. “We have an IT [information technology] committee, a social media committee and a volunteer committee each working in their area of expertise and all their work is vetted by professionals who are experts in their fields. No one is getting paid, but some organizations have dedicated a staff person to work on the alliance without charging it [the alliance].”

The alliance organized the cleaning and disinfecting of public locations, including Al-Aqsa Mosque. Wasfi Kailani, director of the Hashemite Fund for the Restoration of Al-Aqsa, told Al-Monitor that the coordinators of the alliance reached pragmatic solutions for the issue of prayer at the holy mosque.

“Working with them, the Jerusalem [Islamic] Waqf agreed to keep all prayers in outdoor locations after the disinfection and to ensure worshippers keep distances from each other,” Kailani said. He said the decision allowed Palestinians in Jerusalem to keep their spiritual connection with the holy shrine without endangering worshippers. “Palestinians of Jerusalem were able to make this pragmatic compromise that ensured both their ability to worship and to keep people safe,” he said.

Meanwhile, 12 Palestinians who were involved in the disinfection of the mosque area were reported to have been arrested by Israeli security March 16.

Mahdi Abdul Hadi, head of the Jerusalem-based PASSIA think tank and member of the Islamic Waqf Council in Jerusalem, told Al-Monitor that the Israeli reaction is aimed at fighting every Palestinian community effort. “This is a home-grown movement of Jerusalemites concerning their community and wanting to serve their people,” Hadi said.

Dimitri Diliani, president of the Jerusalem-based National Christian Coalition, told Al-Monitor that the alliance is a positive effort in support of volunteerism in Jerusalem. “The work of committees and volunteers to raise awareness of the coronavirus and disinfecting public space exposes the failure of the [Israeli] occupiers in protecting Jerusalemites and at the same time, it shows the high level of communal cooperation in the occupied city of Jerusalem.”

Still, the alliance's effort was not without critics. “What we should be doing is having lawyers go to court and sue the Israeli municipality for their lack of attention to the Palestinian neighborhoods in the city,” said a Jerusalem member of the Islamic Waqf Council who asked not to be identified.

“These are haphazard efforts by amateurs who don’t have the skills or expertise to deal with something as large as this coronavirus,” the official said.

But Budeiri pointed out that all the work being done is “vetted by experts and is based on the advice of the WHO, which is a member of our alliance.”

Budeiri agreed that Israel should take responsibility, but said that the issue can be dealt with by others who are focusing on the legal and political side of things. “Our goal is humanitarian and we refuse to be sucked into the political cycle,” he stressed.

The initiatives by Jerusalemites are the latest expression of the political leadership vacuum that exists in a place with 350,000 Palestinian residents whom Israel — and lately Americans — refuse to allow to express their Palestinian nationalism while the Palestinian leadership is not allowed to connect with them. Palestinians in East Jerusalem are using their most powerful tool, their community unity, to thwart these efforts and to focus on their No. 1 goal of staying put in their city despite the pressures.