Resistance to the Israeli government’s emergency measure to track coronavirus patients has revealed one of the most secretive tools of the Shin Bet in its war against terrorism. 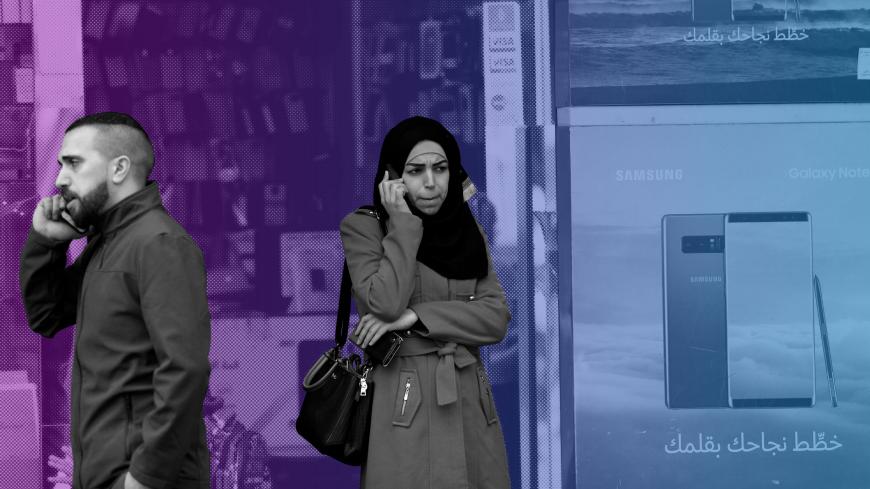 Palestinians speak on their mobile phones in the West Bank city of Ramallah, Jan. 30, 2018. - REUTERS/Mohamad Torokman

The Israeli government’s March 15 approval of emergency regulations allowing the Shin Bet to track COVID-19 patients and those around them set off a public outcry, for good reason. The Association for Civil Rights in Israel, the Adalah Legal Center for Arab Minority Rights in Israel and the Joint List petitioned the Supreme Court to overturn the new regulations, objecting that even with the fight against the coronavirus and the need to oversee public health concerns, this extreme step tramples on individual rights and democratic norms. The court agreed with the petition, at least in part, and instructed the government that the implementation of the new regulations must be subject to Knesset supervision.

The struggle revealed one of the most sensitive methods used by the Shin Bet in its war against terrorism. Until the recent coronavirus outbreak, it was one of the most secretive. As it turns out, the Shin Bet has what it calls “The Tool,” essentially a secret intelligence database where information about every citizen is constantly collected. The new emergency regulations granted the Shin Bet permission to use it to track coronavirus patients. According to an investigative report by journalists Ronen Bergman and Ido Shvartztuch published March 27 by Yedioth Ahronoth, while the database was originally intended to be used in the war against terrorism, the possibility of it being used for other purposes poses a real threat to civil liberties. One unnamed former top Shin Bet officer was quoted in the piece as saying, “'The Tool' has saved countless of Israeli lives. It is hard to imagine us waging the war against terrorism or our efforts to expose espionage without it.”

As part of this investigation, an unnamed senior manager of cyber technologies at the Ministry of Communications said, “Communication companies are required by law to provide all information deemed necessary to the security services. Every conversation that takes place leaves a record in the communication companies’ systems. This record contains lots of data, including the phone number that initiated the conversation, the target of that conversation, the phone number of that conversation’s target, the location of that phone and the location of towers through which the call was initiated. The same is true of the phone receiving the call. The phone location is recorded even if the owner of the phone does not accept the conversation or sends a text. The network knows exactly where the person is at any given moment.”

The investigation also revealed that the five members of the Knesset’s Foreign Affairs and Defense Committee’s Subcommittee for Intelligence are aware of the Shin Bet's activity as well as the heads of the various branches of Israel’s security services such as the minister of defense, chief of staff, director of the Shin Bet and director of the Mossad. And, of course, the prime minister. It was Benjamin Netanyahu who initiated the use of the database in the fight against the coronavirus, and in doing so, made its existence public knowledge. Now even terrorist organizations in the West Bank and Gaza Strip — the very organizations that it was developed to combat — know about it.

The leaders of Hamas, Islamic Jihad and the militant Tanzim units of Fatah always knew that cell phones could be used to identify them and employed complicated means to conceal their use. Their greatest fear was, of course, eavesdropping. While writing an article for Yedioth Ahronoth during the second intifada, I met in Gaza with Sami Abu Samhadana, a member of a prominent family in Rafah and a high-ranking member of Fatah in the Gaza Strip. His brother, Jamal Abu Samhadana, founded the Popular Resistance Committees, which were responsible for a number of horrifying terror attacks against Israelis. One of the most shocking was the murder of Tali Hatuel and her four daughters on the Kisufim Road in Gush Katif on May 2, 2004. We were sitting in an office tower in the Gaza Strip because Samhadana believed that Israeli jets would not dare strike a multistory building and leave numerous civilian casualties. Suddenly, we heard a helicopter overhead and jets flying over the building. Samhadana went pale and asked if anyone knew I was meeting with him. He even checked my cell phone to see if it could be used to locate me. I did not know what to tell him. “No one knows,” I answered. Afterward, he told me that he changes his phone number every couple of days to ensure that he could not be located.

His brother Jamal, who helped plan the June 2006 abduction of Gilad Shalit, was assassinated before the plan was carried out in an airstrike on the training camp. It is unknown whether the database was already operational or if routine eavesdropping on his phone made the killing possible. Or maybe it was nothing more sophisticated than intelligence provided by a collaborator.

Many years have passed since his assassination. Cyber warfare has become much more sophisticated and, as has now been revealed, the Shin Bet has a vast database covering just about everything about every resident of the West Bank and Gaza Strip. It is safe to assume that the database helped the IDF launch a series of “high-quality assassinations” including the killing of Islamic Jihad's Bahaa Abu al-Atta in November 2019.

The Shin Bet has a reputation as an expansive and capable organization that can pinpoint precise locations for the air force to conduct surgical operations while avoiding harm to bystanders. Hamas once claimed that senior officers in the Palestinian Authority collaborated with Israel and provided the intelligence need to carry out Atta’s assassination, but the claim seems likely intended to draw fire away from Hamas after it refused to participate in Islamic Jihad’s armed response. How would officers in the Palestinian Authority have any information about an Islamic Jihad senior who lives his whole life underground? And why would the Shin Bet need it when it can locate any resident at any given moment? Atta may have lived underground out of fear of assassination, but even if he took every possible precaution and did not carry a cell phone on him, the people surrounding him could always be located.

In response to the security escalation in Gaza this February, Israel warned Hamas by way of Egypt that if the hostile fire didn't stop, Yahya Sinwar, the movement’s leader in Gaza, would be killed. Sinwar went underground. He was certainly well aware that Israel could locate him, but it is doubtful that he knew then what he knows today from public news sources: that Israel is capable of tracking his every movement and the movements of all the other leaders of his organization.