Prime Minister Benjamin Netanyahu has focused his political career on battling the Iranian nuke program as the biggest threat to Israel, but his legacy ultimately hinges on the way he confronts the current coronavirus outbreak. 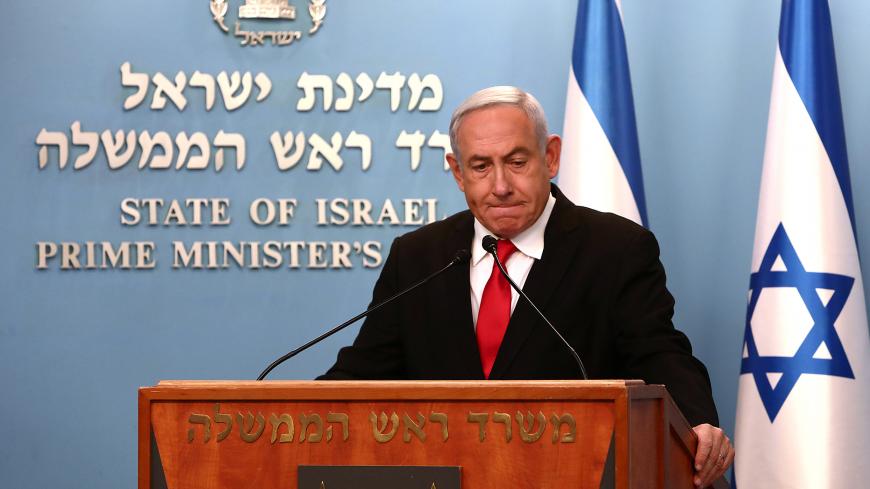 In January 2016 when Prime Minister Benjamin Netanyahu attended the World Economic Forum in Davos, he was just starting his fourth term as prime minister. As during his two previous terms, Iran was the biggest threat he faced, so he took advantage of the forum to meet with US Secretary of State John Kerry and express his strong reservations about the world powers' agreed upon nuclear agreement with Iran. Netanyahu also voiced his concerns about the agreement in an interview with CNN’s Fareed Zakaria. When asked how he wanted to be remembered, Netanyahu said, “I would like to be remembered as the protector of Israel. That's enough for me, protector of Israel.” Netanyahu, 66 years old at the time and already a veteran prime minister, wanted his legacy to be that of “Mr. Security.” In other words, he wanted to be seen as someone who would have no qualms about attacking the Iranian nuclear project. After all, from Netanyahu’s perspective, the program posed an existential threat to Israel.

It is therefore somewhat ironic that the war against the novel coronavirus has emerged as the biggest issue that Netanyahu has been forced to deal with in his 14 years as prime minister. It is not some elusive war with Iran that is shaping his legacy, but a social, economic and health crisis whose real impact is still too early to gauge. What makes the situation even more challenging is that this is happening while Netanyahu serves as a transition leader, a position he has held for more than a year. His indictment on charges of bribery, fraud and breach of trust only exacerbates his political entanglement.

Netanyahu gives a press conference almost every evening to report on the steps being taken by the government to stop the spread of the coronavirus in Israel. Standing by his side are Health Minister Yaakov Litzman and Finance Minister Moshe Kahlon. It is almost as if the prime minister is still campaigning. He makes a point of flattering himself, sometimes embarrassingly so, over how well prepared Israel is for the crisis, especially when compared to the rest of the world, and about how he has the crisis under control.

Netanyahu's critics and political rivals are not impressed. Instead, they accuse him of making cynical political use of the crisis and of terrorizing the population. One of them, Yisrael Beitenu Chairman Avigdor Liberman, brutally attacks Netanyahu on a regular basis. On March 17, for instance, he posted on Facebook, “One man, and his name is Benjamin Netanyahu,… has been leading us toward a major crash, which is already at our door. What we all need to internalize is that Netanyahu’s PR campaign will not defeat the coronavirus or resolve the economic crisis.”

Liberman has accused Netanyahu of ignoring the healthcare system for the last decade and warned that the Israeli public will pay the price for this fiasco. Netanyahu doesn’t need Liberman to tell him that this will be his biggest test, and that if Israel faces a catastrophe like the one Italy is dealing with, he will go down in history as a corrupt, failed prime minister who brought disaster upon his people. Senior figures in the relevant ministries say that Netanyahu has been working from morning to night on the coronavirus crisis. He has slept little, worries constantly and masters every last detail. Even during the Sabbath, he held marathon discussions in his home with senior officials from the Ministries of Health and Justice. In the end, they gave their approval to use Shin Bet’s advanced digital technologies in the fight against the virus.

During meetings with professionals from the Ministry of Health, Netanyahu is presented with chilling scenarios in which thousands of people die from the virus. The officials then pressure him to impose more restrictions on public movement. In contrast, senior figures at the Ministry of Finance have been warning that such restrictions will result in economic catastrophe. When push comes to shove, Netanyahu tends to choose the more severe response.

Meanwhile, polls show that Israelis look favorably on the way Netanyahu is managing the coronavirus crisis. The general feeling is that the situation is under control. The big question is what will happen down the road. After all, this is a global event, marked by a significant degree of uncertainty.

Since March 16, some 200,000 Israelis have been forced to take unpaid leave or have been fired as a result of Netanyahu’s decision to halt almost all economic activity. Having benefited from a stable economy for the past few years, Israelis now face genuine existential concerns. It is unclear whether the aid package announced March 12 by Netanyahu and Kahlon will be enough to get them through a lengthy period of lockdown and recession.

The healthcare system’s lack of preparedness for an extreme situation like the current one is a political indictment of Netanyahu. For the last few years, there have been repeated claims that the system is on the verge of collapse because of the enormous burden it bears and the lack of adequate budgets to match population growth. Now, the system is facing what some are describing as its greatest test.

Over the last few weeks, after Netanyahu began dealing with the coronavirus and realized how serious it is, he ordered 1,000 new ventilators and other medical equipment, and new medical facilities were built to house coronavirus patients. The question is whether at the moment of truth, when the number of people infected by the virus rises sharply, the system will be able to function properly.

People often say that Netanyahu is a “doctor of fear” and that his leadership is built on sowing panic in the face of existential threats and catastrophes. While this is true to a large extent, it is not necessarily the result of a comprehensive political strategy. Rather, it stems from his particular worldview. The prime minister takes after his late father, the historian Benzion Netanyahu, in his belief that he has a gift for identifying risks to the nation and warning against them. This is a key part of his approach to leadership. His response to the Iranian nuclear threat is the most obvious example.

When Netanyahu returned to power in 2009, he focused most of his efforts on stopping Iran from developing nuclear weapons. He gave frequent, detailed speeches about the threat looming on Israel’s doorstep. Even now, senior Likud leaders recall a party meeting in 2011 in which a stern-faced Netanyahu appeared before them and said, “These are not ordinary times. Danger is rushing toward us from Iran. The greatest danger faced by a living organism is when it doesn’t identify the risk, or if it can’t tell whether that risk is another living organism.” Since then, Netanyahu's governments have invested billions of dollars on preparations to attack Iran’s nuclear facilities, and he has devoted countless speeches to how Iran is increasing its strength and establishing itself in Lebanon and in Gaza. In the end, however, the greatest test of Netanyahu’s leadership is a virus that made its way out of China to paralyze the world, including Israel. Netanyahu never prepared for that.