The coronavirus pandemic sets new records in Israel, yet Prime Minister Benjamin Netanyahu plans on going to Washington for a four-day trip. 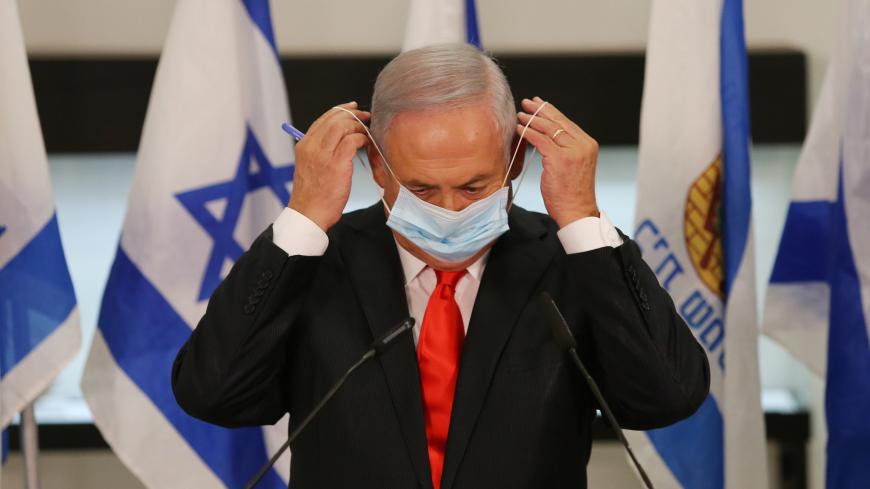 Israeli Prime Minister Benjamin Netanyahu during his visit to the Israeli city of Beit Shemesh near Jerusalem, Sept. 8, 2020. - ALEX KOLOMIENSKY/POOL/AFP via Getty Images

Social media, morning news and talk shows on Sept. 10 focused on the question of whether it is appropriate for Prime Minister Benjamin Netanyahu to fly to Washington next week for the White House signing of Israel’s normalization agreement with the United Arab Emirates (UAE) while the coronavirus pandemic rages uncontrollably throughout Israel. According to Netanyahu associates, he will be absent from the country for four whole days. The ceremony in Washington is scheduled for Sept. 15.

Netanyahu’s planned absence has been generating growing criticism over the timing of the trip and the decision to leave the country rather than devoting himself to curb the spread of the disease. The debate grew more heated this morning following the latest Health Ministry report that indicated that another record of daily infections had been broken in the previous 24 hours, with over 3,900 Israelis testing positive for the virus — compared with fewer than 1,000 in early July at the start of the pandemic’s second wave in Israel.

Along with these troubling statistics, Israel’s largest-ever government, formed in May to deal with the coronavirus crisis, continues to zigzag. Its performance is hobbled by persistent infighting between its two main components — the Likud and Blue and White parties — even as Netanyahu intensifies his attacks on the state prosecution and other law enforcement agencies.

No wonder then that Israelis witnessing this disarray keep losing trust in their government and its leader. The general sense is one of crippled governance and uncertainty, as reflected in the latest polls indicating an ongoing crisis of public trust in Netanyahu. Results of a Channel 13 poll aired Sept. 7 found that 65% of respondents are dissatisfied with his performance in handling the coronavirus crisis.

Unfortunately, for Netanyahu, this bad news comes at the peak of a historic diplomatic process he has labored over in recent years and that is now bearing fruit.

This was not how Netanyahu imagined his trip to Washington for the signing ceremony with the UAE under the auspices of US President Donald Trump. Netanyahu aspired to attend the event as a winner, exactly 27 years after then-Prime Minister Yitzhak Rabin signed the landmark Oslo Accord with PLO leader Yasser Arafat on the same White House lawn in the presence of a previous president, Bill Clinton. Netanyahu headed the Knesset opposition in those days and led the bitter struggle against the deal with the Palestinians. Under international and domestic pressure, he nonetheless implemented part of the accords following Rabin’s 1995 assassination, paying a political price on the right.

Ironically, now that he can claim that he did it his way, having disproven the long-held view that Arab states will only make peace with Israel once it makes progress on peace with the Palestinians, he is drowning in domestic woes. Not only is he standing criminal trial on corruption charges, the government is unable to get a handle on the spreading pandemic and persistent, deep unemployment, while the health-care system is nearing capacity.

These fast-moving developments are overshadowing the glad news of peace. The chilly response of his political foes is echoed in the reaction of his supporters, troubled by daily concerns over their income and health. Joyous peace celebrations are simply not happening these days.

Setting aside the coronavirus crisis and Netanyahu’s indictment, Israel is certainly experiencing an exceptional period in its relations with Arab states. For Netanyahu, this important period for Israel is colored with tragic, personal hues.

The impending Israel-UAE agreement was announced almost a month ago, on Aug. 13, following secret trilateral negotiations among Israel, the UAE and the United States. Shortly after, an Israeli delegation accompanied by senior US officials flew directly from Tel Aviv to Dubai, cutting through Saudi airspace on a plane bearing official Israeli insignia.

The dizzying developments are changing the face of the Middle East. On Sept. 4, shortly before the start of the Jewish Sabbath, Netanyahu announced that Israel was establishing diplomatic ties with Kosovo, the Muslim breakaway state that declared independence from Serbia in 2008. Appearing on social media, Netanyahu festively declared that Kosovo would open an embassy in Jerusalem, and Serbia, with which Israel has longstanding diplomatic relations, would move its embassy from Tel Aviv to Jerusalem. “This will be the first Muslim-majority state to open an embassy in the capital. As I have said in recent days, the circle of peace and recognition of Israel is widening and other states are expected to join it,” Netanyahu said.

Word of this decision emerged from Washington following a trilateral meeting between Trump, Serbian President Aleksandar Vucic and Kosovo’s Prime Minister Avdullah Hoti, at which the two rival states announced an economic normalization of their relations. Despite the beneficial economic and diplomatic significance of this move for Israel, Netanyahu failed to infect the public with his enthusiasm.

Such was also the case on Sept. 8, when an official delegation from Chad, led by Gen. Abdelkarim Deby, the son of Chadian president and its Cabinet chair, landed in Israel. Netanyahu met with the officials to discuss options for stronger ties, including the opening of embassies — the Chadian one possibly in Jerusalem — and appointment of ambassadors. The visit followed the resumption of ties with Israel announced during a 2019 visit by Netanyahu to Chad. At the start of this week’s meeting, Netanyahu asked Deby to convey his regards to his father and the people of Chad, according to the prime minister’s office.

However, Israelis were hardly overjoyed by this display of affection attesting to Netanyahu’s good relations with the Chadian leader — their attention was diverted by yet another coronavirus infection record set that day and Israel’s continued global leadership in terms of per capita infection. The national mood was not improved even when the White House announced with great fanfare later that day that an official signing between Israel and the UAE was set for Sept. 15 in the presence of Trump, Netanyahu and UAE Foreign Minister Abdullah bin Zayed al Nahyan.

The coming days will be crucial in terms of the government’s decision on controlling the spread of the virus. Netanyahu is holding firm on his planned trip to Washington and he continues to prepare for one of the most significant events of his public career, which was supposed to be an uplifting experience of historic, national joy. With the Jewish New Year nearing, on Sept. 19, and with it discussions of a second, statewide lockdown, Israelis are unable to connect with the sense of happiness Netanyahu is trying so hard to convey — not even with the optimistic forecasts of economic prosperity generated by the agreement with the UAE and the tempting seven-star vacations at Abu-Dhabi’s extravagant hotels.